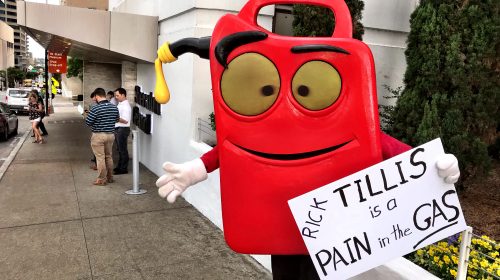 Gas Can Man stood out on the public sidewalks, sometimes in the rain, to scold State Rep. Rick Tillis (R-Lewisburg) for voting to raise the state’s gas tax last year.

Gas Can Man held a sign mocking the legislator as “Gas Tax Tillis.”

Tillis, as previously reported, promised not to vote to raise the gas tax during the 2017 legislative session, yet he did it anyway.

The time and the place for Gas Can Man’s public protest — outside Nashville’s downtown Sheraton Hotel — was no random choice. While Gas Can Man stood outside and braved the elements, Tillis enjoyed his time inside, at the ritzy hotel bar, surrounded by lobbyists, who were reportedly there to hold a fundraiser for him.

Tillis had time to feast on appetizers and make small talk with lobbyists. He had zero time, according to one of those lobbyists, to talk to The Tennessee Star about the gas tax or his thoughts about Gas Can Man. The lobbyist told us this was a private event and that Tillis was off limits — even though other hotel patrons seemed able to come and go around the bar as they pleased.

The fundraiser, whether a formal or informal affair, was not listed on any of the hotel’s official itineraries.

As the Tennessee Star previously reported, Tillis was one of 37 Republicans in the state house who voted in favor of Gov. Haslam’s IMPROVE Act, which increased the gas tax by six cents per gallon (28 percent) and the diesel tax by 10 cents per gallon (55 percent). Republican Gov. Bill Haslam later signed it into law.

The IMPROVE Act also allowed the state’s largest counties–including Davidson County–to hold elections to increase local sales and other taxes to fund transit projects. It was under the authority of this law that the Metro Nashville Council passed a resolution to put the proposed $9 billion Barry-Briley transit plan before Nashville/Davidson County voters in the May 1 referendum where the plan was decisively rejected.

While attempting to explain his vote switch last year, Tillis said the bill had changed.

Gas Tax Man did not mingle with Tillis or any of the lobbyists.

No one invited him to come out of the rain and join them inside.

Former State Rep. Billy Spivey, who held the State House District 92 seat prior to Tillis, has announced he will challenge Tillis in the August 2 Republican primary.