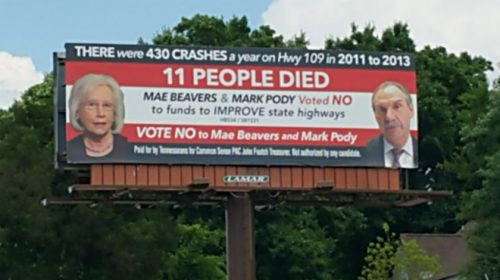 On the eve of the next installment of the IMPROVE Act’s additional $0.01 per gallon gas tax and $0.03 per gallon diesel tax increases set to go in effect on July 1, 2018, and nearing the highpoint of election season, the billboard appeared on the northbound side of Highway 109 in Wilson County.

Beavers is running in a hotly contested race for Wilson County Mayor against eight-year incumbent Randall Hutto. Meanwhile Pody is seeking re-election to the District 17 State Senate seat encompassing Wilson County which was vacated by Beavers when she decided to run for Governor. Pody, a sitting State Representative at the time, narrowly won the seat against Democrat opponent Mary Alice Carfi in a special election held in late 2017 to finish out the term. Pody will again face off against Carfi in the November 6, 2018, general election for a full four-year term.

Paid for by Tennesseans for Common Sense PAC, the billboard makes the implication that Beavers and Pody, by voting no to the IMPROVE Act in 2017 were the cause of “430 crashes in 2011 to 2013” and are somehow responsible for the tragic deaths of 11 people that occurred on Highway 109.

According to the Tennessee Bureau of Ethics and Campaign Finance website, officers of the Tennesseans for Common Sense PAC, formed on March 13, 2018, are long-time Democrat operative Carol Brown Andrews and Lebanon-based personal injury lawyer Neal Agee.

In addition to her Democratic campaign research work as Vice President of Grindstone Research, LLP, with clients such as former Nashville mayor turned gubernatorial candidate Karl Dean, Andrews is on the board of directors of Emerge Tennessee, the state affiliate of a national organization with a goal of increasing Democratic women at all levels of public office, and is herself running for Democratic State Executive Committeewoman in the State’s 17th Senate District.

The PAC’s Facebook page explains that the PAC was formed to provide information on the voting records of Beavers and Pody.

The billboard makes an outrageous and factually unsupportable implication, the information available from the Tennessee Department of Transportation (TDOT), tells quite a different story.

There are three specific points that decimate the implication of the reckless claims made by the PAC in its billboard.

First, TDOT issued a “Current Backlog” report to the Tennessee General Assembly dated November 9, 2015, that included the further description “Projects Approved by the TN General Assembly and Currently Under Development.”

On that 2015 TDOT report, more than a year before Haslam introduced his IMPROVE Act, the SR-109 project which goes from US-70 to the Cumberland River/Sumner County line and is the final section in Wilson County that remains single-laned in each direction, showed a project status of being in the “construction” phase.

Second, each of the nearly 1,000 projects identified by TDOT and included in the IMPROVE Act were assigned a category by program type that describes “the primary benefit they offer the public of the State of Tennessee.” TDOT projects included in the IMPROVE Act numbered 962 at the time of passage, and is now up to 971 according to the TDOT SPOT – Statewide Project Overview Tracker – website.

Below is a list of the 9 program types TDOT categorized the IMPROVE Act projects into, along with the total number and the estimated dollars to completion for each of those categories.

The list of TDOT projects for Senate District 17, which include none in the Safety category, can be viewed below.

Third, since taking office in 2011 and prior to his IMPROVE Act, as previously reported by The Tennessee Star, Governor Bill Haslam’s budgets over six years systematically reduced state funding to TDOT by an average of $56 million per year as compared to his predecessor, grew the State budget by 20 percent while reducing TDOT’s budget by 13 percent, and growing TDOT overhead by 63 percent while shrinking highway infrastructure spending by 33 percent.

In an exchange of comments on the organization’s Facebook page about the State’s $2 billion surplus being used for roads, the PAC praised Governor Haslam who, “in his wisdom, knew that our infrastructure across the state was in dire need of a fix, and that costs money.” Ignoring that the state had not just sufficient, but record surplus revenues, the PAC declared that “a dedicated stream for roads is best.”

The PAC announced that it will be active throughout the election season, presumably to continue its false and misleading attacks on Beavers and Pody, with radio ads airing on local radio WCOR, Wilson County’s Own Radio.