Members of the Tennessee Republican Party have plenty to say about Democrat Mark Brown’s vulgar comments. 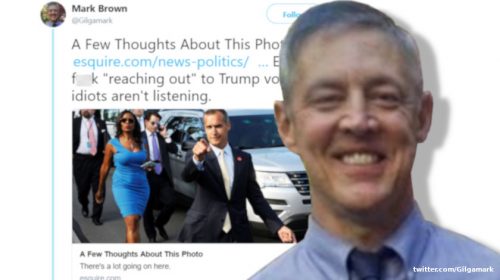 Brown, a spokesman for the Tennessee Democratic Party, has been saying a variety of four-letter words and other unsavory things regarding President Donald Trump, his supporters, conservatives and Republicans, The Tennessee Star reported Tuesday. He said those who voted for Trump are “idiots.”

One past tweet was “f*** ‘reaching out’ to Trump voters. The idiots aren’t listening.”

Brown also has been serving as a spokesman for Phil Bredesen’s U.S. Senate run. Bredesen expressed outrage over Vice President Mike Pence calling him a “liberal.” Bredesen said that was “name-calling.”

Republicans, understandably, are not happy. The Tennessee Republican Party issued a press release with the reactions of Republicans and other Tennesseans:

Lt. Governor Randy McNally: “Writing off the forgotten men & women who rose up on November 8, 2016 is the height of political ignorance. Over one million Tennesseans voted for @POTUS. If you are attempting to reach them, you need to listen to them, not talk down to them. Unacceptable.” (Twitter, 7/30/18)

State Sen. Jack Johnson, 23rd District: “Remember this when casting your vote in Tennessee’s US Senate race this Nov.  @Gilgamark, spokesperson for Dem party and @PhilBredesen, thinks the 61% of us who voted for Pres. Trump are idiots.  @VoteMarsha” (Twitter, 7/30/18)

Tennessee Young Republicans: “First Democrats called Republicans deplorables, and now they’re calling us idiots. Well, the GDP is up 4.1% and the economy is booming. Let’s not be fooled when Bredesen says that he will work with the President, his true intentions are pretty clear” (Twitter, 7/30/18)

State Rep. Roger Kane, 89th District: “Always good to know what the other guys think about you and the voter in general……” (Twitter, 7/30/18)

Matt Herriman, TN Senate Republican Caucus Political Director: “The TN Democratic Party, @PhilBredesen and @Gilgamark (AKA Mr. Twitter Troll) continue their spiral into the abyss. Completely out of touch with the vast majority of TNeans and exactly why @VoteMarshawins in November! #VoteMarsha #CanYouPhilIt” (Twitter, 7/30/18)

College Republicans, University of Memphis: “60% of Tennesseans voted for @realDonaldTrump , and Mark Brown of @tndp thinks everyone of them is a “f***stik”. Now we know what Phil Bredesen’s party @tndp really thinks of Tennessee voters. #CanYouPhilIt” (Twitter, 7/30/18)

State Sen. Brian Kelsey, 31st District: “This is the type of divisiveness that is hurting our country & is why we need to @VoteMarsha in November: Top Tennessee Dem Party official snubs ‘reaching out’ to Trump voters, calls them ‘idiots’” (Twitter, 7/30/18)

Michelle Garcia: “Here you go TN voters, here’s what #TNDemocrats really think about you. Please vote for @VoteMarsha to represent us in the Senate. #tnpol” (Twitter, 7/30/18)

Phil Valentine: “First of all, who taught this guy to cuss? Some of this makes no sense. Second, this is how Dems look at everybody that doesn’t think like they do.” (Twitter, 7/30/18)

State Rep. Mike Carter, 29th District: “Sadly, this is exactly what @PhilBredesen & the Dems think of @realDonaldTrump voters.  If you support the #MAGA agenda of lower taxes, strong borders & a military so powerful no one will challenge it, @VoteMarsha is the only choice for#TnSen” (Twitter, 7/30/18)

State Rep. Jason Zachary, 14th District: “This is what @PhilBredesen and the Democrats think about the people of TN!  Don’t be fooled by their empty campaign rhetoric. @VoteMarsha has proven she is a principled, conservative leader and will stand up for TN values in Washington DC.” (Twitter, 7/30/18)

State Rep. John Stevens, 24th District: “Out of touch, limousine liberal @PhilBredesen has yet to denounce his staffers contempt for fellow Americans and Tennesseans. We must @VoteMarsha this Nov. #civility” (Twitter, 7/30/18).

Brian Hornback: “National news is looking at the TN Democrat Party and some dude last name Brown. Read about it here. I really thought the state democrat party would hire people more representative of the people of the state.” (BrianHornback.com, 7/30/18)

State Rep. Andy Holt, 76th District: “So the OFFICIAL @TNDP spokesman, Mark Brown @Gilgamark doesn’t want to speak about his hate-filled comments to our buddies at @FoxNews. Hmmm? A spokesman who’s not speaking?  I wonder what Uncle @PhilBredesen has to say about this? #CanYouPhilIt” (Twitter, 7/30/18)