Republican Congresswoman Marsha Blackburn is hitting the road hard on Primary Election Day to generate the enthusiasm and energy she is needing to propel her to a win over Democrat Phil Bredesen in their November U.S. Senate race. 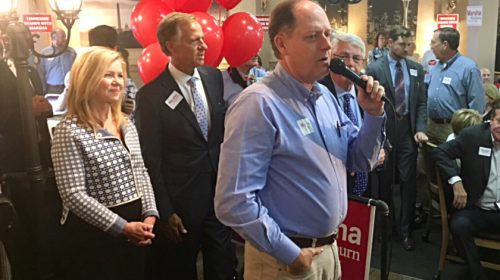 Blackburn started the day with a morning breakfast at the City Cafe in Brentwood with about 237 supporters, including Governor Bill Haslam, State Senator Jack Johnson, Williamson County Sheriff Bill Long, County Mayor Rogers Anderson, and several other local officials, party activists and community leaders. The packed crowd heard Governor Haslam point out that the race against Bredesen won’t just determine whether New York Senator Chuck Schumer gets another vote closer to running the Senate, but could clearly impact the future confirmation of conservative, Constitutionalist federal judges and Justices to the Supreme Court.

Haslam also noted that if the Democrats are able to take control of the Senate, thanks to the votes of prospective Senators like Phil Bredesen, it also means a change in Committee Chairs in the Senate. “Phil Bredesen in the Senate could mean liberal Diane Feinstein replacing Chuck Grassley as Chair of the Judiciary Committee, making it almost impossible to have conservative judicial appointments get a hearing much less a vote out of that committee; and our own Senator Lamar Alexander would be replaced by liberal Patty Murray as Chair of Health, Education, Labor & Pensions,” Haslam pointed out. “Our votes in Tennessee will matter – a lot – in November.”

Blackburn also started her own television ad campaign this week with a bio spot detailing her background and how it shapes her focus on serving in the Senate. Bredesen has already spent over $3 million in television ad buys thus far; this is the first television spot aired by the Blackburn campaign.