– It was reported that Democratic California Sen. Dianne Feinstein employed a Chinese spy.
– Her longtime staffer, Russell Lowe, fits the description of the reported spy.
– Feinstein’s office refused to comment on whether Lowe was the spy.

All the details of a former, longtime Sen. Dianne Feinstein staffer who’s accused of relaying information to Chinese intelligence services while working for the California Democrat point to Russell Lowe, a Daily Caller News Foundation investigation has determined.

Lowe worked for 20 years in Feinstein’s San Francisco office, where he was a staff liaison to the Asian-American community before leaving approximately five years ago. All those details match up with the descriptions of the Chinese spy Feinstein reportedly employed.

“Chinese intelligence once recruited a staff member at a California office of U.S. Senator Dianne Feinstein, and the source reported back to China about local politics,” Politico Magazine reported on July 27, describing the staffer as “a liaison to the local Chinese community” who was secretly “reporting back” to Chinese intelligence services.

Since then, more details have emerged about the alleged spy, including that he worked for Feinstein for 20 years, “attended Chinese consulate functions for the senator” and was fired five years ago. 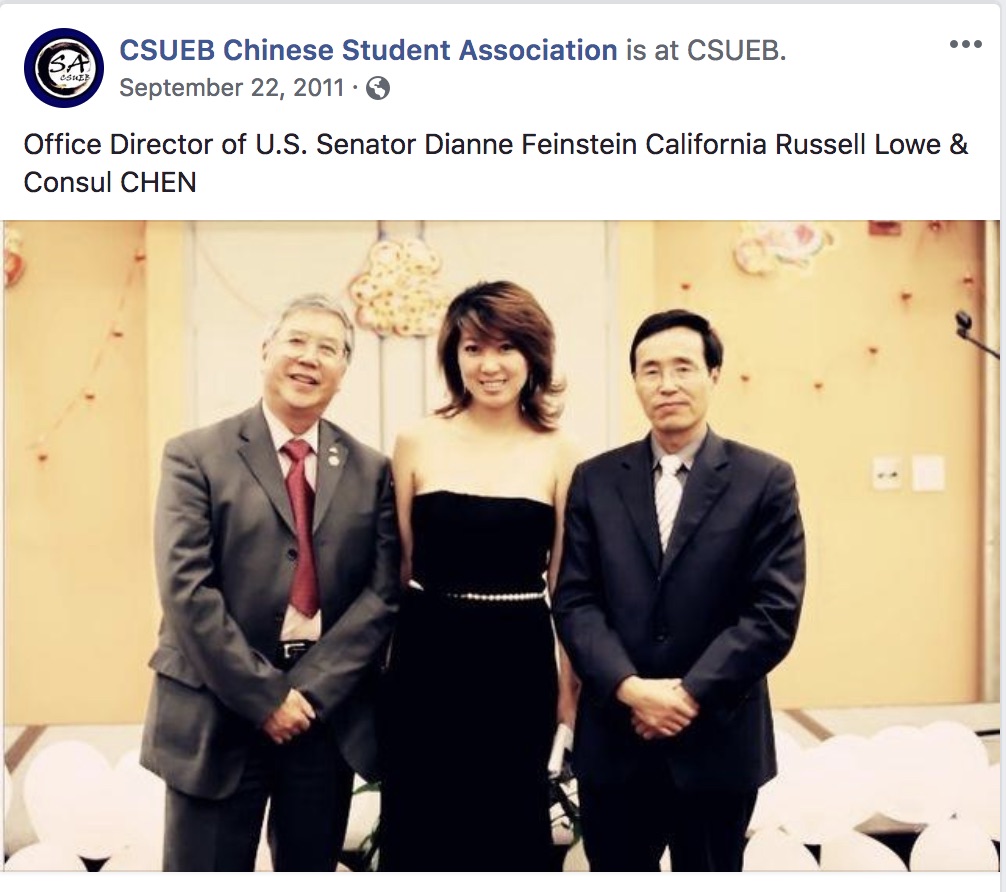 All of those details point to Lowe, who was listed on Feinstein’s payroll as an “office director” in 2013, according to records maintained by the Sunlight Foundation.

Lowe joined then-San Francisco Mayor Ed Lee and other California politicians at a farewell reception hosted by the Chinese consul in March 2013.

Lowe and six other attendees “awarded proclamations in recognition of Consul General Gao’s contributions to the friendly cooperation between China and Bay area cities,” according to the consulate’s event recap.

By 2014, Lowe was gone from Feinstein’s staff. When he spoke at an April 2014 conferenceon Chinese investment in the United States, he was introduced as a “former assistant to Senator Feinstein.”

Hankoryeh, a South Korean news publication, described Lowe in October 2017 as “a Chinese-American who spent 20 years as the aide to Dianne Feinstein.” Lowe visited the publication’s Seoul office at that time with former Democratic California Rep. Mike Honda, who left office in January 2017 after losing to progressive challenger Ro Khanna in 2016.

Feinstein has saidthat the spy had “no access to sensitive information,” and the former staffer was never prosecuted.

Lowe now works with the Education for Social Justice Foundation, a San Francisco-based nonprofit that says it’s focused on “educating the public on the Japanese military’s ‘comfort women’ system, which forced over 200,000 girls and women from at least 13 Asian countries into sexual slavery by the Japanese Imperial Army before and during WWII.”

Efforts to contact Lowe through the foundation were unsuccessful. Feinstein’s office declined to answer TheDCNF’s questions about Lowe and instead released a broad statement from the senator.

“Five years ago the FBI informed me it had concerns that an administrative member of my California staff was potentially being sought out by the Chinese government to provide information. He was not a mole or a spy, but someone who a foreign intelligence service thought it could recruit,” Feinstein said.

“The FBI reviewed the matter, shared its concerns with me and the employee immediately left my office. He never had access to classified or sensitive information or legislative matters. The FBI never informed me of any compromise of national security information.”