“When I met him, I go: ‘Wow, there’s nobody on this planet I’d rather have be my president than Donald Trump,’” he told The Minnesota Sun, a state-focused news site that, like The Ohio Star, is a wholly owned subsidiary of Star News Digital Media. Lindell was launched into the political scene after that summer meeting when he came out in support of then-candidate Trump.

“First of all, let me get it straight. I was never a politician. I didn’t know a conservative from a liberal before I met Donald Trump,” he said in an interview. “I went all-in to back him and to get behind him to be our president. That’s when I actually had to learn what liberal is and what conservatism was. I had to learn all this.”

Since then, Lindell has doubled-down on his support for the president, and has done so proudly. The MyPillow founder was recently chastised on social media for refusing to pull his advertisements from Laura Ingraham’s Fox News show.

“I didn’t back down. I advertise across the board,” Lindell said, noting that he’s fine with advertising on stations that bad-mouth or mock him.

“My sales went up—it went up about 30 percent. Now when they threaten to boycott on Twitter, they go: ‘Don’t boycott MyPillow, he’ll just double down,’” he said, though he did admit that some in his inner-circle initially questioned whether supporting Trump was a smart financial move. 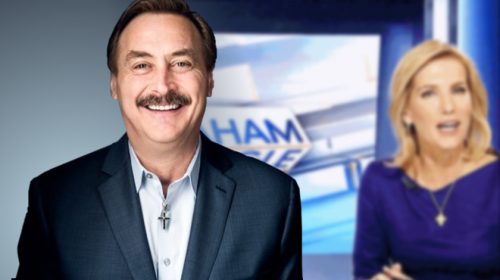 “Did other people tell me that I was nuts for doing it? Absolutely,” he said, but he knew after his private meeting with the president that he “was going to do it no matter what.”

But in the end, it all paid off, and the Minnesota businessman says he is now busier than ever.

“I’m probably 30 percent busier because I did what, you know, I followed what God had me do, and also I believe in our president,” he told The Sun, advising other Trump-supporting entrepreneurs to not shy away from doing the same.

“If you’re that kind of company—worried about that, you don’t need to worry. You’re going to be busier. That voice out there against him is a smaller voice than ever,” he said, though he was careful to note that he does his “due diligence” before backing a political candidate.

“I would never get behind anything I didn’t do my due diligence on,” he commented, offering his endorsement of Republican gubernatorial candidate Jeff Johnson, attorney general candidate Doug Wardlow, and Senate candidate Karin Housley.

“Let me tell you, after the president, I’ve had so many people call me and want my platform of integrity to back them. I don’t put money out there. I put my integrity behind them and meet the person. Now I met Jeff this summer and we became friends,” Lindell told The Sun, predicting that Johnson will win in a landslide against Democrat Tim Walz.

“Every single Trump supporter should be going for Jeff. Jeff is the real deal, and he is going to win, and it’s not even going to be close,” Lindell stated, revealing that he’s also met with Wardlow and spoken with Housley over the phone.

“He needs to win. He is going to win. I’m putting everything behind that guy,” Lindell said of Wardlow, who is running against former congressman Keith Ellison for Minnesota’s attorney general. “Doug’s so smart, and I just think that he’s the perfect fit.”

Lindell also expressed concern over Ellison, who is currently facing domestic violence allegations and dealing with revelations that he has a lapsed law license in the state of Minnesota.

“I have so many people praying for that because Ellison – I’m afraid of what he’s capable of. He’s just – I don’t know what to use as a quote there – evil. I believe he’s maliciously evil,” Lindell remarked.

A former crack-cocaine addict, Lindell has been sober since 2009 and is launching a recovery network to help other addicts across Minnesota.

“This is going to be a huge platform. It’s going to be called the Lindell Recovery Network. Imagine a 22 year old opioid addict. He can’t relate to maybe a 50 year old meth addict,” Lindell explained, saying his network will be like a “match.com” for addicts.

The network will pair addicts who are leaving treatment with mentors who have gone through similar experiences, saying he will have “thousands” of mentors on staff.

“There’s going to be nothing better to kill this opioid crisis. Just demolish it,” he said, adding that all of the proceeds from his forthcoming book will go directly towards the foundation supporting his recovery network.

The Minnesota native believes that the shame surrounding addiction is one of the main obstacles delaying progress in the opioid epidemic.

“Drugs and addiction have been shamed so bad, there’s so much shame in it, nobody else wanted to ever be vocal about it,” he told The Sun. “I’m about as vocal as you can get. I was on the shopping network the other day and I was like: ‘Yeah, I was just a former crack addict from Minnesota.’ I mean, nobody says this stuff without filter.”

If one thing’s certain, Lindell will continue to be vocal while always placing his “Christian values first.”

“It’s very rewarding for me that I was brave and stood up and did what I was supposed to do,” he said. “Now I’m hearing back with people going: ‘Wow, you were right. We are so glad that you weren’t afraid and complacent like other people – that you stood for what you believe in.’ And I believe in this president.”