Trump, Jr., accompanied by former Fox News commentator Kimberly Guilfoyle, joined DeWine supporters at the home of Linda and Bob Sebo. Some of the other guests at the event included Ohio GOP Chair Jane Timken, Trump Ohio Campaign Director Bob Paduchik, and longtime Columbiana County GOP Chair Dave Johnson, who was a host for the event. 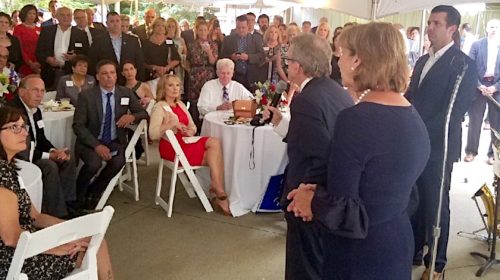 “This was the most successful event I’ve ever hosted, not only in terms of money but in terms of generating the enthusiasm we need moving towards November,” Johnson said. “It was an extraordinary success and gave us a chance to show off Salem a bit in the process.” Johnson declined to provide a specific dollar amount raised, but with over 250 people in attendance it likely exceeded $300,000.

Trump, Jr. told the attendees that “we need someone like Mike DeWine to be our partner at the state level.”

“My father, the president, values Ohio’ for both the past successes we’ve had and future successes we hope to have. This part of Ohio, in particular, is fertile Trump ground,” Trump, Jr. added. 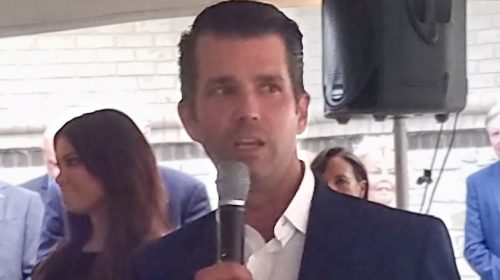 Ohio Star political editor Steve Gill asked the president’s eldest son a number of questions about the campaign prior to the event.

“A lot of the Trump voter base will turn out for him and vote for him but aren’t necessarily Republicans. How do you and President Trump get that base energized and voting in November for Republican Senate, Governor and Congressional candidate’s?” Gill asked.

“A lot of people forget that the Trump base doesn’t just include conservative Republicans, but a lot of blue collar Independents who previously voted for Obama,” Donald Trump Jr. said.

“These are the forgotten people in states like Ohio, who were sick and tired of politicians in both parties over things like the Iraq War, illegal immigration and some of these disastrous multinational trade deals, that did little but suck the lifeblood out of working class communities,” he added. 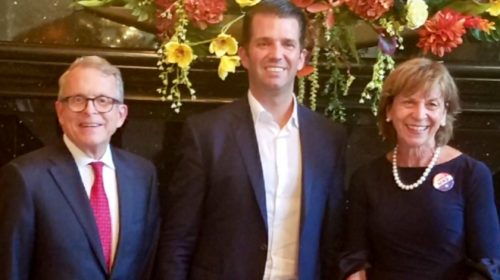 “To turn these voters out in November, Republicans need to make clear that this election isn’t about Republicans or Democrats, its a binary choice between my father and his America First agenda or the failed policies of the political establishment. In November, like it or not, Donald J. Trump is on the ballot and Republicans need to continually remind voters of that,” Trump Jr. noted.

Gill also asked about the difference between the Trump economy and the Obama economy.

“The Trump economy, or the Obama economy that only kicked in AFTER President Trump was elected, should be playing well with the voters but hasn’t seemed to connect yet. Why do you think that is?” Gill asked.

“I think the American people absolutely see the success of the Trump economic agenda,” Trump Jr. said. “If you look at the realclearpolitics polling average of the “right track vs wrong track” question, on July 31, 2016, Americans thought the country was headed in the wrong direction by a spread of over 46 points and if you look at the most recent polling, that spread has closed by over 30 points. The Trump economic agenda of regulatory relief for businesses, tax-cuts for the middle-class and better trade deals for American worker has undoubtedly supercharged the economy and I believe most people see that, he added.

Gill then focused on the role played by the opposition mainstream media in the coming 2018 midterm elections.

“From downplaying the successes of the Trump Administration to falsely claiming a 3,000 to 4000 Puerto Rico hurricane death toll, the #fakenews media seems to be doubling down rather than showing any semblance of non-partisanship. How do you overcome that in the next 6 weeks?” Gill asked.

“Fighting back against the lies and distortions of the establishment media is probably our biggest hurdle to winning in November,” Trump Jr. agreed. “The good news for us is that the more unhinged the liberal media becomes, the more they reveal their extreme anti-Trump bias to the American people. Ultimately, CNN and other establishment media outlets like them are doing themselves a major disservice by being so consistently hysterical in their coverage of my father because all it does is result in more and more Americans losing faith in them,” he added.

Gill closed asking about the personal aspects of life on the national stage for the Trump family. “Two years in, what have been the most surprising positives and negatives of life for your dad and your family as a First Family?” Gill asked.

“The biggest negative for me is that since I’m on the road campaigning so much, I’m not able to spend as much time as I would like with my kids,” Donald Trump Jr. said.

“The biggest positive is getting to meet so many amazing people across the country. I’ve been fortunate enough to meet so many of America’s factory workers, law enforcement and veterans and it only takes spending a few minutes with people like that, to make you realize just how great this country really is,” he concluded.