Katz is one of two lawyers representing Ford. She is the woman who came out of nowhere at the eleventh hour in Judge Brett Kavanaugh’s Supreme Court nomination hearings to accuse him of  a high school sexual assault that would have happened during President Ronald Reagan’s first term.

Katz donated $2,000 to Brown in March, through an earmarked donation to J Street PAC. A copy of the donation is here. 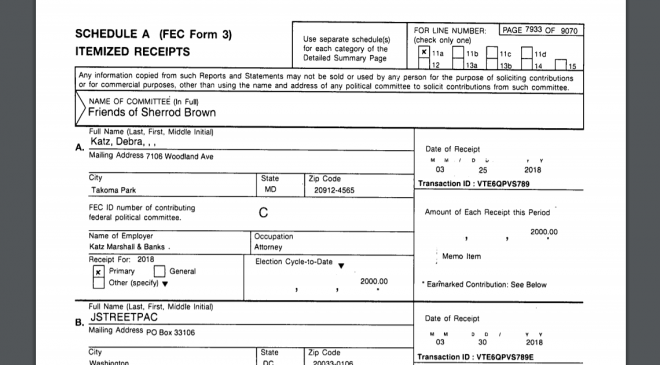 Brown has come under criticism for an alleged sexual assault.

A PAC called #MeTooOhio launched a TV ad earlier this month accusing Brown of physical and emotional abuse and is calling on the senator to resign.

In 1986, Brown was in the midst of a divorce with his then-wife, Larke Recchie. According to records on file at the Franklin County Common Pleas Court in Ohio, Recchie alleged in her divorce complaint that Brown “has been guilty of gross neglect of duty and extreme cruelty.”

The divorce documents are available here.

Recchie sought a restraining order to keep Brown from “doing bodily harm” to her. Recchie claimed to be “in fear for the safety and well-being of myself and our children due to [Brown’s] physical violence and abusive nature” and said Brown “intimidated, pushed, shoved and bullied” her on multiple occasions, according to the Daily Caller.

Recchie would later accuse Brown of violating the restraining order and said he “pushed me up against the wall with his arms in order to pass and entered the house.”

This is not the first time the allegations have surfaced and Brown has denied that he ever hurt his ex-wife.

According to a Columbus Dispatch article from 1989, Recchie again accused her ex-husband of behaving violently, the Daily Caller said.

Recchie has since backtracked on her repeated allegations, saying they were mere “angry words” as part of an “unfriendly” divorce, and the Daily Caller reports that Brown’s current wife says the whole idea that her husband could be abusive is “preposterous.”

Brown has denied the allegations repeatedly, saying that he’s “never hurt” his ex-wife.

Some call the difference in how Kavanaugh and Brown are being treated hypocritical.