If a man can be known by the company he keeps, then Sen. Sherrod Brown (D-OH) believes President Trump is a racist, misogynist white nationalist.

Bradley Whitford, the Hollywood actor who has hurled obscenity-laced insults at President Trump and his children, said he was in Ohio this week to campaign for “the great Sherrod Brown.”

That’s right!!! Thrilled to be here in Ohio campaigning with the great @SherrodBrown. Policy questions for the Senator, I’ll handle the moisturizing quandaries….. https://t.co/pTpGYMAB57

Brown is running for re-election to a third term in the U.S. Senate and is challenged by Congressman Jim Renacci, (R-OH-16) 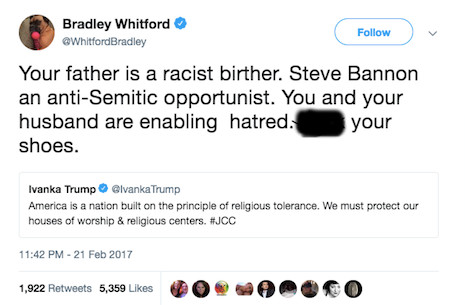 Whitford has gone so far as to write “F**k your shoes” in a tweet directed at the president’s daughter, Ivanka Trump.

​Whitford is best known for his portrayal of White House Deputy Chief of Staff Josh Lyman in the NBC drama The West Wing. He regularly goes off on all things Trump but suffers zero pushback from Twitter, the same social-media giant that shadow bans and suspends accounts of users for far-less nasty and abusive tweets targeting liberals like President Obama.

Whitford’s incendiary tweets are as wide-ranging as they are frequent, calling President Trump a “rodeo clown,” a “racist, misogynistic, proudly unintellectual,” and a “white nationalist,” among other inflammatory barbs. He once said the 2016 election was “a call to arms” for Democrats.

Brown’s decision to fundraise with Bradley Whitford begs the question: Does he endorse Whitford’s brand of extremist, hateful diatribes against a sitting U.S. president that Ohioans overwhelmingly elected in 2016?

Leslie Shedd, senior communications adviser for the Renacci campaign, believes he does.

“Bradley Whitford is nothing more than an online bully who attacks anyone who disagrees with this ultra-liberal politics,” Shedd told The Ohio Star. “By inviting the Hollywood star to Ohio, liberal career-politician Sherrod Brown is condoning Whitford’s vulgar language and disgusting comments about President Trump and all Republicans. But it lines right up with Brown’s own disgusting comments comparing Republicans to Nazis — so I guess I shouldn’t be surprised.”

Mandi Merritt, spokeswoman for the Republican National Committee, was likewise disgusted by the move.

“This shouldn’t come as a surprise that Sherrod Brown would be fundraising with a left-wing radical who hurls offensive insults at Republicans and bullies people who disagree with him – Brown does that himself, referring to Republicans as ‘Nazis’ on several occasions,” Merritt told The Star in an email.

Merritt added the following observation about Brown and Whitford, a match made in heaven:

From his Hollywood throne, Bradley Whitford has hurled insults at President Trump and bullied Republicans across the country.  Sherrod Brown’s decision to campaign with him speaks volumes.  While Brown likes to pretend he’s a down-to-earth senator who fights for the working class, fundraisers with divisive Hollywood elites show who he really is – an out-of-touch, far-left radical that is wrong for Ohio. Good thing voters won’t be rolling out the red-carpet for Sherrod Brown come November.”

Bottom line: Hollywood elitists are supporting Brown because he supports all of the causes that are important to them — taxpayer-funded abortions all the way through the ninth month of pregnancy, gun control, environmental extremism and open borders with tax-funded giveaways for every Third Worlder who can make it onto U.S. soil.