Kathleen Clyde, the Democrat candidate for Ohio secretary of state, believes the electoral system under which Donald Trump carried the state by 8 percentage points in 2016 was “rigged,” and she intends to make sure that won’t happen again. 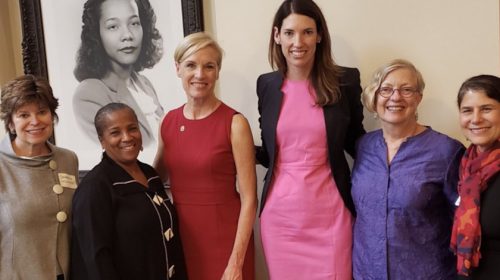 In an interview with the left-wing ReWire News, Clyde accuses the current secretary of state, Republican Jon Husted, of using his office to “restrict” the vote of Democrats and explains why the real motivation behind her campaign is to erase the common-sense regulations Ohio has placed on the abortion industry.

The gains pro-life Republicans have seen in Ohio the last several years – including the vote for Trump over Hillary Clinton and the laws regulating abortion – were all accomplished because of the redistricting that happened in 2010, Clyde says.

Ohioans feel as though the system is rigged against them – that’s because it is. We can change that this November and move Ohio forward.

Read more on my plan to do just that as your next Secretary of State: https://t.co/8CzXYS5QGc

She explains how the office of the secretary of state is critical to Democrat plans for the next redistricting, which they see as the key to rolling back Republican gains:

The secretary of state is one of three statewide officeholders that sits on the state redistricting commission that will redraw the lines after the next census,” she explained, “and this election will set up who is in place for that critical process.” Speaking of its legislative maps, Clyde said the state “currently [has] the most rigged map in Ohio history”— something she’d like to see change if she’s elected this November.

Clyde quotes the American Civil Liberties Union, a group made up entirely of Democrat and socialist lawyers, as backup for her opinion that Ohio’s elections are “rigged” in favor of Republicans.

In actuality, Ohio’s electoral districts are redrawn every 10 years, based on census data, with the party in power of the state legislature having oversight over how those districts are drawn. That’s a fact of life in every state. If Democrats gain power in Ohio, they will call the shots in forming the new district lines.

If the party not in power believes the districts have been unfairly gerrymandered, they have the option of filing suits that seek judicial review. This is inevitably what happens every 10 years and it’s what happened in Ohio. So far, no court has ruled in favor of the Democrats and agreed that Ohio’s districts have been “rigged.”

It’s all about abortion

But the most shocking revelation in Clyde’s comments to ReWire is her admission that her true motivation for running for secretary of state has nothing to do with the traditional roles of the office, which are to oversee elections and the incorporation of businesses. As Clyde confesses to ReWire, she is driven by her desire to make sure Ohio’s electoral districts are redrawn in favor of Democrats so they can expand “reproductive rights” for women.

Yes, you read that right. For Clyde, this race is all about abortion. Everything else is secondary, mere window dressing, and diversionary tactics.

Here’s more from the ReWire article:

Addressing gerrymandering may not seem like an election issue that could drive voters to the polls, but it’s a subject delicately intertwined with the pressing issues driving today’s political climate, such as reproductive rights.

Clyde has the backing of several pro-choice groups in her race, including EMILY’s List, NARAL Pro-Choice Ohio, and Planned Parenthood Votes Ohio. She told Rewire.News that she’s been “a consistent and strong supporter of women’s ability to make their own reproductive health care decisions.” That’s important, she said, because “that has unfortunately been under attack in Ohio.”

Clyde is running against Republican Frank LaRosa in the Nov. 6 election.

Under the influence of her sponsors at Planned Parenthood and Emily’s List, Clyde is infuriated that babies in the womb might have a slightly higher chance at survival in Ohio than in other states.

You can’t make this stuff up. Here is more from her interview with ReWire:

Ohio’s General Assembly last year passed an extreme “heartbeat” bill through both of its chambers, which would have criminalized abortion when a heartbeat is detectable in a fetus—before many people know they are pregnant. Kasich vetoed the measure, but some GOP state lawmakers haven’t given up on efforts to pass it.

“Part of the reason that [reproductive rights have] been under attack has to do with the polarization brought on by a redistricting process that rigs our maps so that middle-of-the-road people are not being elected to office in Ohio, which means [we have] a lot of extreme legislation, extreme legislators—and the right for women to make their own reproductive health care decisions has been attacked over and over,” Clyde said.

“Reproductive rights [are] definitely an issue tied to gerrymandering,” she said. “If we are able to get leaders in place who are committed to fair districts … we will be able to draw a fair map and, I believe, see an end to these constant attacks on women’s reproductive health care.”

For the record, here are the “extreme” measures Ohio has adopted with regard to abortion that Clyde wants reversed.

All of the above laws would be considered common sense to anyone who is the least bit pro life. But to Clyde and Planned Parenthood, they are extremist, dangerous “attacks on women,” and they must be overturned.