Cordray routinely encourages Ohio voters to pass Issue 1, which will appear on the ballot Nov. 6. If passed, it would force a constitutional amendment banning judges from giving jail time for possession of up to 19 grams of fentanyl and other deadly drugs. 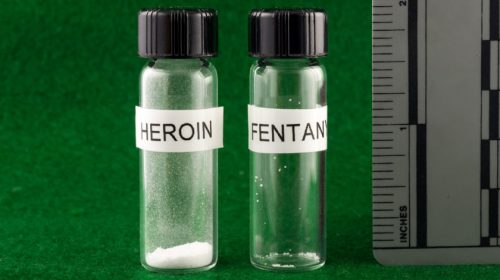 Mike DeWine, along with groups representing Ohio’s judges and prosecuting attorneys, have spoken out against Issue 1, calling it a disaster in the making. Why? Because it would give Ohio the dubious distinction of having some of the nation’s most lenient drug laws. That being the case, “where do you think the drug dealers are going to come?” said DeWine.

DeWine has noted that 19 grams of fentanyl is enough to kill 10,000 people. Fentanyl is 100 times more toxic than morphine and many times that of heroin.

But Cordray insists DeWine is “distorting” his record on Issue 1. He says “even the newspapers” have said DeWine is distorting the facts about Issue 1 and fentanyl. If someone is caught with 18 or 19 grams of fentanyl “you charge them with trafficking” instead of possession, Cordray said.

But that is misleading, says Dave Yost, a former prosecuting attorney and candidate for Ohio Attorney General.

Yost tweeted during last night’s debate, calling Cordray out for his repeated statement that persons with up to 19 grams can be charged with trafficking and sent to prison, even if Issue 1 were to pass.

Rich Cordray mis-stated the law at tonight’s debate. Possession without more cannot be the basis of a trafficking conviction under Ohio law — @MikeDeWine is right.

Worth noting: the law is construed strictly against the state in a criminal prosecution. #OHGovDebate

DeWine declared he is unapologetically pro-life.

“The central function of government is to protect the most vulnerable members of society. That includes the unborn,” DeWine said.

Cordray said he would veto the “heartbeat bill” that would ban abortions at the point of which an unborn baby has been medically determined to have a heartbeat.

Ohio Right to Life spokeswoman Jamieson Weaver told The Ohio Star that Cordray would make it a priority to reverse all of Ohio’s hard-fought pro-life progress.

Mike DeWine has proven himself to be a strong defender of the right to life of every human person, born and unborn. With a pro-life gubernatorial administration, Ohio Right to Life has seen 20 pro-life initiatives signed into law, and abortions decrease by 25%. Its clear that if Richard Cordray were Ohio’s next governor, all the pro-life progress that we’ve seen in the last seven years would be reversed. Ohio’s most vulnerable just can’t afford that.”

With a key vacancy on the U.S. Supreme Court that could result in Roe v. Wade being gutted or overturned, it is likely that the next governor of Ohio could decide whether abortion will remain legal in Ohio. Mike DeWine made it clear tonight that he would outlaw abortion without exception. As Ohio’s AG, DeWine has abused his office to oppose contraception coverage in the Affordable Care Act, to block Planned Parenthood from using Medicaid to offer preventive health care, and to eliminate abortion access in Toledo and now Dayton by closing the only abortion clinics in those cities. If DeWine becomes governor, his extremist views would result in a reproductive health crisis that would rival the opioid crisis.

“NARAL Pro-Choice Ohio is proud to support Richard Cordray. In tonight’s debate, Mr. Cordray pledged to defend a woman’s right to choose and said he would veto a six-week abortion ban.”

Ohio Right to Life also responded to Cordray’s pro-abortion debate comments on its Twitter page, noting that Cordray is supported by abortion giant Planned Parenthood and is committed to restoring public tax dollars to Planned Parenthood.

Mike Gonidakis, president of Ohio Right to Life, has said the election of Mike DeWine “is as important as any in our state’s history in order to protect women and their children.”

On the economy and jobs

That impressed the National Federation of Independent Business’ Ohio chapter, which represents thousands of small and medium-sized businesses in the state.

Cordray talked about expanding broadband throughout the state, expanding government-paid healthcare and other projects with no real answers on how to pay for it.

“We will be a good partner (to local government). We will work with them,” DeWine told moderator Karen Kasler, of Ohio Public Radio. “What we’re not going to do, Karen, is promise everything in the world to everybody. We don’t know where that budget is going to be.”

Ohio Republicans, after watching the debate, concluded a vote for Cordray is a vote for higher taxes.

A new post-debate poll out Tuesday from Baldwin-Wallace University shows DeWine maintaining a narrow three-point advantage over Cordray with four weeks to go before Election Day.

That explains why Cordray, unable to make any headway in the first three debates, tried to lure his opponent into a fourth debate. DeWine politely declined. Both sides had agreed to three debates and Monday was the third, he reminded Cordray’s team.

“Throughout this series of debates, Mike DeWine has solidified his position as the only candidate prepared to enter the Governor’s office on day one,” said Mandi Merrit, spokeswoman for the RNC. “Whether it’s combating Ohio’s opioid epidemic, being tough on crime, or creating more jobs and economic prosperity, Mike DeWine is the only candidate with real plans and the proven experience to get the job done. Ohioans can’t afford Richard Cordray’s failed record of job loss, discrimination and mismanagement. Mike DeWine is indisputably the right choice to continue moving our state forward as Ohio’s next Governor.”