China is a rising economic power that will threaten the United States’ place as the world’s biggest economy.

At least, that’s the narrative we’ve become familiar with. But does it really hold up?

Economists use gross domestic product to measure the size and growth of national economies. GDP is based on the real value of what is produced. It’s usually measured by calculating how much money was spent in one country during a single year.

In terms of GDP growth, no country has been hyped up more than China. The World Bank reported that in 2017, China had become the world’s largest economy with a GDP topping $23 trillion. By comparison, United States GDP in 2017 was just over $19 trillion.

Indeed, China’s growth has been impressive. Over the last 25 years, its economy has grown at an average rate of 9.6 percent a year.

But China’s economy still isn’t as big as it’s often advertised, and that’s because a misleading measure is used. The measure is called the purchasing power parity exchange rate. This exchange rate tells us how much money you would need in China to be as wealthy as you are in the United States.

This is not an appropriate way to compare the relative size of countries. 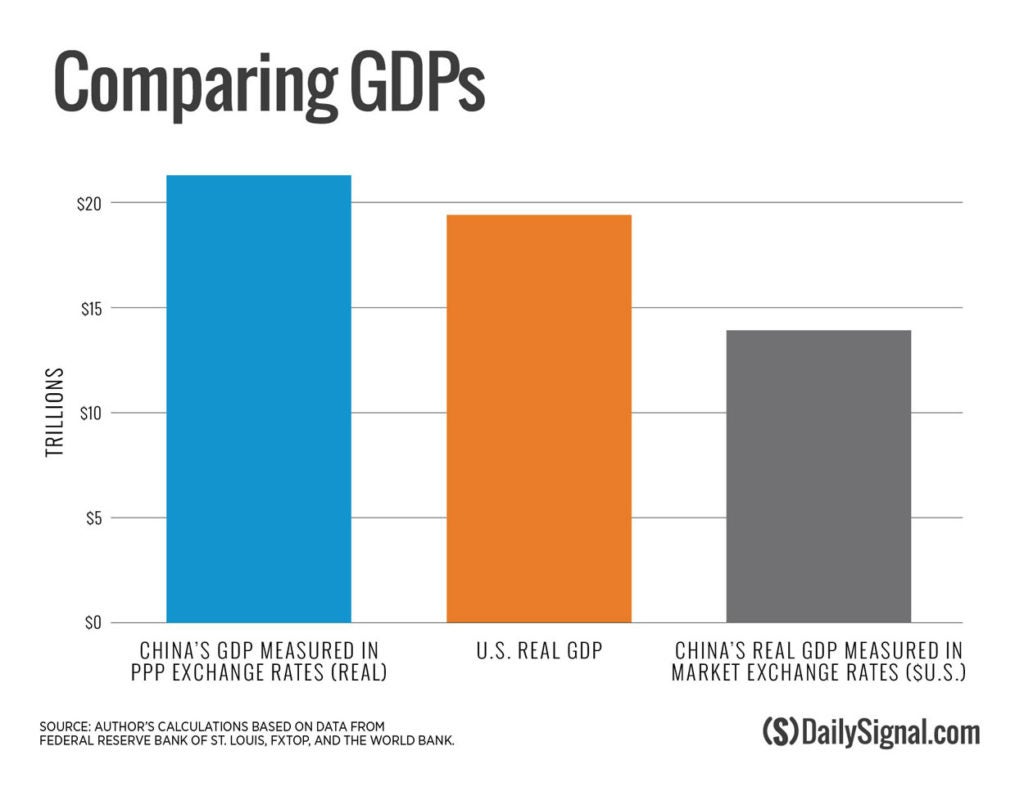 Consider: If you go on vacation to Mexico, you know that things will be cheaper there, so you won’t have to exchange the same amount of dollars that you spend at home in the United States. This allows you to take less money with you, or to treat yourself and buy more than you normally would.

The purchasing power parity exchange rates are an extremely useful way to measure development and predict where a country might aim its GDP to achieve the same living standards as the United States. But to actually compare the sizes of the economies, it is better to use the regular market exchange rates, like you would to change your dollars to another currency.

In practical terms, this means China doesn’t have as great a capacity to spend as is being advertised.

This is especially important to understand when talking about trade.

GDP is an indicator of a country’s economic footprint on the world stage. So, it’s important to understand the extent to which its economic size could disrupt global markets.

Similarly for exporters, when the U.S. exports to China, the U.S. has to accept yuan at the market exchange rate.

The inappropriate use of purchasing power parity exchange rates to measure economic capacity has fueled the misconception that China is a giant that threatens the U.S. for economic dominance. This in turn has fueled support for tariffs, which only harm our economy by raising prices for imported goods and raw materials.

The bottom line: China’s economy is large, but by an accurate measure, it’s not yet as big as the U.S. economy. The administration should be wary of threatening China with tariffs. While China is not as powerful as advertised, smooth relations with China are important for our livelihood and national well-being.

As long as the two nations continue trading with each other, both the U.S. and Chinese economies will continue to flourish.

Gabriella Beaumont-Smith is a macroeconomics policy analyst at The Heritage Foundation.  The Daily Signal depends on the support of readers like you. Donate now.

Appeared at and reprinted from DailySignal.org.