NumbersUSA, a two decades-old national organization that advocates for lower immigration to the US, has crunched the numbers and in every state surveyed the results are roughly the same.

One million legal immigrants entering the US each year is too many, voters say. 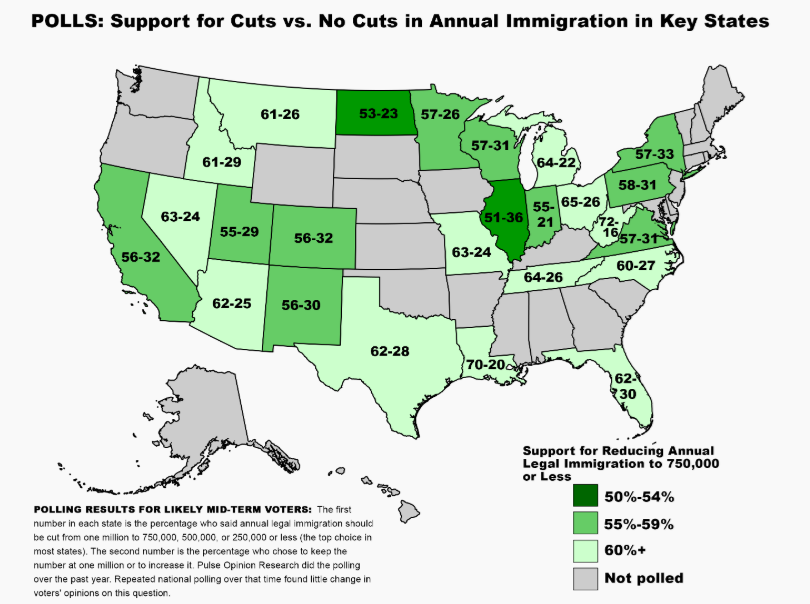 From a recent press announcement sent to members of the Arlington, Virginia based organization we learn that:

The majority of voters in all 25 polled states chose immigration levels at least 25% lower than the current one. The favorite choice was a level requiring at least a 75% cut in annual numbers. (The number of respondents in nearly all the states was 1,000.)

The organization which steadfastly maintains that it is an immigration reduction organization concerned only with numbers of immigrants who, they say, will ultimately impact wages and put pressure on the quality of life Americans enjoy, also publishes a well-respected Congressional Immigration Report Card in which they track votes on several key issues of concern to them and their million-plus members.

NumbersUSA tracks Members of Congress and Senators on those key issues giving each a letter grade ranging from an A+ to an F-.

Scanning the Senator’s website, and in keeping with an apparent Democrat strategy to pretend immigration is not a major issue in the midterm elections, it is no surprise that voters will see no policy statement on immigration of any kind from the Senator.

Although earlier in his Senate career, Brown showed some concern for American workers and did not immediately endorse bills legalizing large numbers of immigrants already in the country, there is no record of such a concern today.

Voters are, however, not left entirely in the dark because his voting record and public statements on the subject have been thoroughly examined by NumbersUSA and reported on their website.

Indeed, as reported by The Ohio Star, just as President Trump was proposing a refugee cap of 30,000 refugees for the coming fiscal year which began earlier this month, Senator Brown went on record supporting the resettlement of 110,000 refugees.

That unsustainable one year admission number of 110,000 was put forward by former President Barack Obama just as he was leaving the White House in late 2016.  Obama had never proposed a number that high in his previous seven years in office.

Brown is being challenged by four-term Republican Rep. James Renacci (R-OH-16) who has represented Ohio’s 16th Congressional District since 2010 and has received a NumbersUSA grade of B-.

Although not a perfect score, compared to Brown he has taken a stand to reduce immigration numbers during his recent term in the House of Representatives as shown by his grade report.

NumbersUSA grades all Ohio House races in addition to the Brown vs. Renacci US Senate matchup.

Candidates who have never served in Congress may still receive a rating from NumbersUSA by contacting the organization and filling out and returning a survey form.

Anna Marie Bolton is a reporter for The Ohio Star.