Two heavy hitters will be coming to Ohio this week to campaign for Republican candidates, underscoring how important Ohio has become to the national GOP strategy to retain the U.S. House and a majority of governorships. 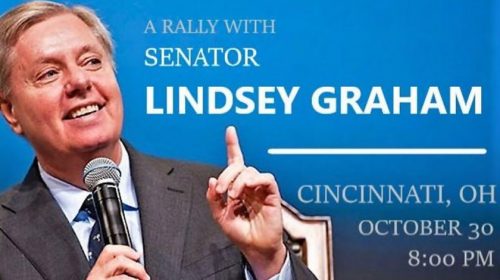 Just one week before Election Day, Sen. Lindsey Graham (R-SC) will lead a “Get Out the Vote Rally” from 8 to 9 p.m. Tuesday, Oct. 30, at the Backstage Event Center in Cincinnati.

Vice President Mike Pence announced he is coming to Mansfield for a rally the next day on Wednesday, Oct. 31. That event is set for 11:30 a.m. at the Mansfield Lahm Regional Airport, at Rob Ridenour’s Hangar.

Both events are free and sponsored by the Ohio Republican Party.

Graham will be joined by GOP gubernatorial candidate Mike DeWine and Rep. Steve Chabot (R-OH-1)., who is up for re-election in Ohio’s First Congressional District. 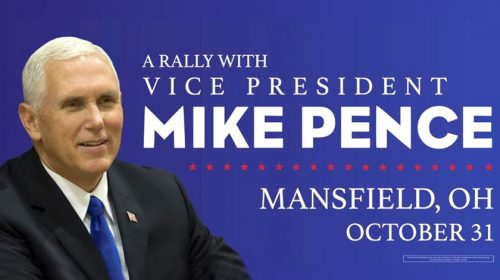 One of those seats is the First District of Ohio, which has been represented for the last 22 years by Chabot. Democrats have poured millions into this district from outside Ohio, targeting Chabot for replacement with Democrat Aftab Pureval, who has campaigned on a platform of gun control, government-paid abortions through all nine months of pregnancy, and a single-payer government-run healthcare system.

Rep. Jim Renacci (R-OH-16), who is challenging incumbent Sen. Sherrod Brown (D-OH) in the U.S. Senate race, will not be present at Graham’s rally in Cincinnati.

Leslie Shedd, senior communications adviser for the Renacci campaign, told The Ohio Star that nothing should be read into Renacci’s absence.

“It was just a scheduling conflict,” Shedd said in an email. “He’s going to be in NY that day.”

Shedd said Renacci and his team will be present at the Pence rally Wednesday morning in Mansfield.

Graham will focus on reminding voters of the importance in electing Republicans on Nov. 6 if they want to see the recent economic momentum continue.

Graham played a key role in getting Justice Brett Kavanaugh confirmed to the U.S. Supreme Court, lashing out in a nationally televised speech against Democratic tactics used in the 11th hour of his confirmation hearings. He denounced the Democrat’s “smear” tactics, saying they would stop at nothing to attain power.

“God I hope you all never get power,” he said at the Senate hearings, repeatedly referring to Kavanaugh as a “good man” whose family would be irreparably harmed by the unfounded accusations.

“This election is about protecting Ohio’s future, keeping our economy booming, and supporting conservative judges,” according to a statement released by Graham’s office.