A confrontation between neighbors in the small city of Hudson, Ohio, is creating a buzz on social media and may reflect the current state of American politics.

At the heart of the controversy lies the question of who will represent Ohio’s 37th District at the State House in Columbus. The seat is up for grabs in Tuesday’s election after the incumbent reached her eight-year term limit under Ohio law.

The candidates are two men who represent their respective cities on the city council – Republican Mike Rasor of Stow and Democrat Casey Weinstein of neighboring Hudson, which is an affluent suburban community north of Akron.

On the morning of Sunday, Sept. 30, Hudson retiree Greg McKinney was outside doing some yard work when he says he was confronted by a neighbor. Not just any neighbor. It was Casey Weinstein, who lives six doors down and also represents him on the Hudson City Council.

McKinney, a retired investment banker, says Weinstein, 36, confronted him in front of his own house and made an odd request.

“You should take down that sign,” Weinstein told McKinney. The sign that offended Weinstein was one his neighbor had posted in support of his opponent, Mike Rasor.

“I might have ignored him if he hadn’t already confronted me in my own yard two years ago about another political sign,” McKinney said in a Facebook post, referring to Weinstein’s unsuccessful run for the same office in November 2016.

So, on this occasion, McKinney says he told his neighbor “It is my yard and my sign.”

He refused to take it down.

“You are an angry, old, white guy, who’s afraid of losing his position,” was the response McKinney recalls receiving from Weinstein. 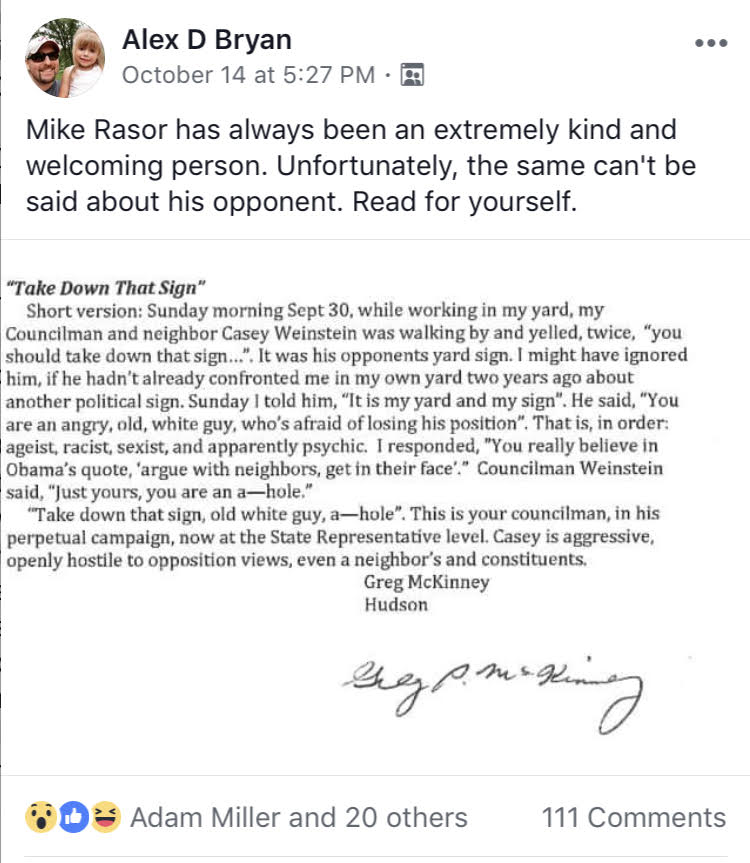 McKinney said he considered the comment to be ageist, racist and sexist.

McKinney said he told Weinstein that he must be following the advice of certain prominent Democrats who have exhorted their followers to “get up in the face” of their political adversaries.

“Just yours, you are an a–hole,” Weinstein responded, according to McKinney.

When contacted by The Ohio Star, Rasor said his only knowledge of the incident came from McKinney, who he met recently while canvassing in Hudson. He said returning civility to politics must start with political leaders at all levels.

“You have politicians and elected leaders encouraging people to do it,” he told The Star. “To me it was just surprising to hear about someone be so brazenly rude who is running for public office.”

On his Facebook page, Weinstein has posted pictures of himself in Air Force uniform, shaking hands with constituents, posing for pictures with babies and declaring his support for the First Amendment.

Weinstein also includes “Support for the First Amendment” as a prominent feature of his campaign website.

The freedom of expression guaranteed for all Americans would theoretically include one’s right to place signage declaring one’s political views on one’s own property, said Rasor, who added that he has no reason to doubt the accuracy of Greg McKinney’s story.

“Greg is a reliable person, a normal guy, and I would have no reason to doubt him,” Rasor said.

McKinney, a longtime Boy Scout leader and baseball coach who moved back to Ohio to raise his children in 1993, posted his exact recollection of his exchange with Weinstein on Facebook after the local newspaper refused to publish it as a letter to the editor.

“I have no way of knowing whether the story is true or false. But Mr. McKinney is a respected member of the community and certainly not the kind of person who would risk his own reputation by lying in public,” Rasor said. “If the story is true, then it’s disqualifying for Mr. Weinstein. We can’t tolerate a candidate swearing at constituents or making racist and ageist comments. Period.”

McKinney said his encounters with Weinstein have been few over the years.

“In the three years he has lived six doors from me, I have spoken to him four times,” he said. “The only time I sensed any cordiality was when, soon after his move to Hudson, he came to my door asking me to sign his petition to run for city council.

“I signed it as I wanted to be nice to the new neighbor that I did not know,” McKinney continued. “The other three included two hostile yard-sign incidents and one neutral encounter when I found his lost dog.”

Weinstein did not respond to an email requesting comment.

This is the second time he has run for the District 37 House seat. In November 2016, incumbent Kristina Daley Roegner defeated Weinstein with 57 percent of the vote compared to 43 percent for Weinstein.

Rasor said he has become “fed up” with the incivility that has engulfed American politics, from the federal down to the local level.

“It’s getting so bad that people are confronting each other and becoming violent,” he said. “Politicians, from the top down, have been setting a bad example. When we start to love each other, the nation’s level of discourse will improve. I will be a unifying force toward this goal as state representative.”

Anthony Accardi is a writer and reporter for The Ohio Star.
Photo “Casey Weinstein” by twitter.com/CaseyforOhio.

One Thought to “Neighbor Divided Against Neighbor: Political ‘Incivility’ Spills Over into Ohio State House Race”