While the establishment news media does everything it can to depress conservative and Republican turnout, here are six close U.S. House of Representatives races where conservative turnout can make all the difference for President Trump’s conservative agenda. 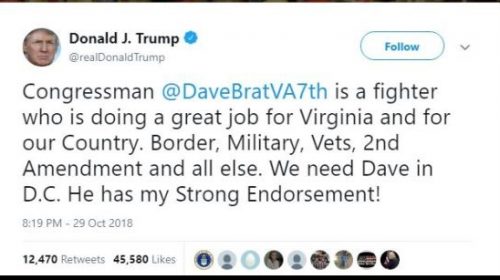 Principled limited government constitutional conservative Congressman Dave Brat (VA-7) is locked in a tight race with liberal Democrat Abigail Spanberger. Spanberger is a former CIA employee who once taught at a Saudi-funded school in Northern Virginia that later had to defend itself after a former valedictorian was charged with joining al-Qaida.

To view a powerful independent expenditure ad supporting Dave Brat click the link or cut and paste into an email:  https://drive.google.com/file/d/1xW-wkhz3cxt3XBOuw_t9UrEisl_uQ4r9/view?ts=5bdb692f.

Counterintuitively, Spanberger has been pounding Brat over his vote in favor of the GOP tax-cut bill. Spanberger has raised twice as much money as Brat and her open borders campaign has benefited from millions in out of state liberal PAC money aimed at unseating one of the Freedom Caucus’s most high-profile members. Turnout will be key, with Spanberger counting on liberal federal and state government employees in the I-95 corridor and Richmond suburbs.

Blum has been hobbled by a crusade of personal destruction being waged against him by the radical left ever since he self-reported an error in one of his financial disclosure forms. The smear campaign coupled with Democrats’ recruitment of new liberal voters in the District’s half-dozen colleges and universities has put the District in play. Conservative turnout from the same voters that gave President Trump his margin in the District is key to preventing a Hillary Clinton clone from flipping the seat.

However, Budd’s race is all about money and geography, with independently wealthy Manning having deep roots in the populous liberal enclaves of High Point and suburban Greensboro. Budd, a businessman who owns a gun shop and range and is also involved in The Budd Group, his family’s facility services company, is facing a tough challenge from progressive lawyer and philanthropist Manning.

Manning is benefiting from active support from outside PACs and Democratic Governor Roy Cooper in what is known in North Carolina as a “blue moon” election; there’s no governor and no state senators on the ballot. Manning holds the fundraising advantage, with a total of $1.9 million raised compared to Budd’s $1.2 million.

Rep. Perry, a principled limited government constitutional conservative has announced his support of Jim Jordan of Ohio for Speaker, meaning he is getting little support from the Republican establishment, while his opponent, George Scott, has been bringing in bags of money from outside PACs and the Democratic leadership.

Democrat Scott has been running on a liberal platform of gun control and open borders, while Congressman Perry, a member of the Homeland Security Committee says “Illegal immigration is a problem, and you don’t have a country if you’re not going to secure your borders.”

Congressman Perry has launched a hard hitting commercial “How Well Do We Know George Scott” featuring a picture taken during Scott’s service in Operation Just Cause, of Scott holding a pistol to the head of a subordinate while his finger is on the trigger, a good metaphor for the entire Democratic Party and the threat it poses to America.

Maria Elvira as she is known to her many Spanish language television fans is an expert on Latin American affairs and the U.S. Hispanic community and has emphasized conservative positions on issues such as creating jobs, improving education, reforming health care, and opposing abortion.

In addition to being a staunch liberal, Donna Shalala is a proud and longstanding member of the Clinton crime and corruption family, and Hillary Clinton carried Florida 27 by 58 percent to 39 percent over Donald Trump in the 2016 presidential election.

However, Maria Elvira, like retiring Republican Rep. Ileana Ros-Lehtinen, is not a doctrinaire conservative on issues such as climate change, where she has followed the policies of Ros-Lehtinen.

The District encompassing Miami Beach, Coral Gables, Key Biscayne and Little Havana is 72 percent Hispanic, and Shalala doesn’t speak Spanish. Maria Elvira holding a slight lead based on her name recognition and her appeal to the amalgam of voters who may be liberal on issues like climate change, but very conservative on matters of anticommunism.

If Republicans are to hold the House majority, conservatives in the Miami-based District must coalesce behind Maria Elvira Salazar and vote for her based on her economic conservatism and strong anticommunist national security credentials.

Wendy Rogers is a retired US Air Force officer and one of the best prospects for flipping a Democratic seat this cycle. After winning a hard fought and divisive primary Rogers is facing Democratic Rep. Tom O’Halleran, a first-term congressman seeking re-election.  O’Halleran started as a Republican, then switched to independent and now is a Democrat.

While O’Halleran runs as a “moderate” the fact is that he votes with Nancy Pelosi and the rest of the Far-Left Democratic leadership and has been a staunch opponent of President Trump’s conservative agenda. Wendy Rogers, on the other hand, describes herself as a “Conservative America First Pro-Trump Republican.”

Rogers has run an aggressive campaign branding Democrats as the Party of “mob rule” and has been unabashed in pointing out the negative consequences if Democrats take over Congress, tweeting “the left is violent.”

This has naturally earned her the enmity of Arizona’s ever so polite establishment news media – the same establishment media that endorsed whacko pink tutu Far Left Democrat Kyrsten Sinema for US Senate.

However, conservatives are strongly behind her, here are just a few of Wendy Rogers’ conservative endorsements and supporters:

Rated Conservative by American Family Association Action, and as a True Reformer by NumbersUSA

Arizona’s 1st District is one of 13 districts that voted for both President Trump and a Democratic representative (Tom O’Halleran) in the 2016 election. American Viewpoint recently released a poll that had O’Halleran and Rogers tied with both at 46 percent support. Its margin of error was +/- 4.9 percentage points and the sample size was 400. Conservatives can flip this seat to the Republican side if they turn out and vote for Wendy Rogers and President Trump’s conservative agenda.

Reprinted with permission from ConservativeHQ.com