A new poll by the Ohio TEA Party affiliate We the People Convention, found Republican Jim Renacci has pulled ahead of incumbent Sen. Sherrod Brown (D-OH) in the race for U.S. Senate.

Renacci mentioned the poll, which shows him up 52.4 to 47.6 percent, during Monday’s rally hosted by President Trump in Cleveland.

“Look at what he [President Trump] is doing for Ohio. Jobs are up, unemployment is down, wages are up, and Sherrod Brown is going to be gone tomorrow,” Renacci said. “We’ve got a good poll today. It shows we crossed over and we’re going to be winning tomorrow.” 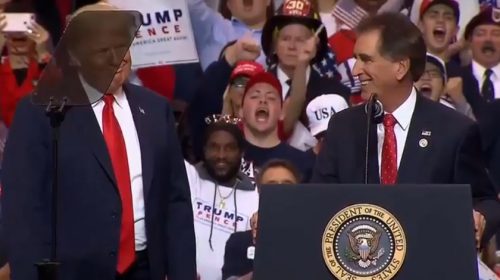 If Renacci were to pull off the win it would be considered one of the biggest upsets in all Senate races across the country. Brown holds a massive funding advantage with $27.7 million in his war chest compared to only $7.7 raised by Renacci.

The poll was conducted Oct. 31-Nov. 3 of 647 random Ohioans who had either already voted early, or absentee, or who definitely plan to vote on Tuesday. Respondents were not given the choice to be undecided. They had to pick their candidates. The poll has a 3.5 percent margin of error.

“The big take away is that our poll confirmed that early voting is split nearly 50-50, which is unusual, but the energy for voting on Election Day is very much in favor of the Republicans,” said Tom Zawistowski, president of We the People.

“If Republicans turn out the way our polling suggests, they will turn out more than Democrats and independents combined by a margin of 52 to 48 percent,” he added. “While the federal and statewide races are competitive in early voting, with Republicans winning by small margins in nearly every race, the projected turnout numbers would result in a Republican sweep if these voters do indeed turn out on Tuesday as they say they will.”

Zawistowski’s organization polled the U.S. Senate race nearly every month since the primary, using the same methodology it used to correctly predict the Trump win in 2016.

“All summer our polls showed Renacci losing to Brown, but almost always within the margin of error of 3.5 percent or so,” Zawistowski said. “They also never showed Brown getting over 50 percent of the vote which is a key sign of weakness in an incumbent candidate.”

But this week, for the first time, the group’s polling showed Renacci moving ahead 52.4 to 47.6 percent when voters were forced to decide their vote. If the Trump voters turn out, Renacci will most likely win, which is likely why Trump was in Cleveland today, the day before the election, campaigning for Renacci.”

The big difference this year, from other mid-term elections, is that the Republicans have turned out for early voting in numbers at least equal to the Democrats.

“Our poll strongly suggests that there will indeed be a significant increase in Republican voting versus Democrat voting overall and that will decide the majority of races in favor of the Republican candidates,” Zawistowski said. “It all comes down to turnout. If Republican’s don’t turn out on Tuesday as projected, the Democrats will likely win several of the state races, the Senate race, and perhaps one additional Congressional seat.”