An attorney representing the Covington Catholic High School kids told The Minnesota Sun that Rep. Ilhan Omar (D-MN-05) will “be sued next week” if she doesn’t retract the libelous statements she made about the viral incident.

In response to a tweet from President Donald Trump Tuesday night, Omar claimed that the boys at the center of the encounter “were taunting [five] black men before they surrounded Phillips and led racist chants.” 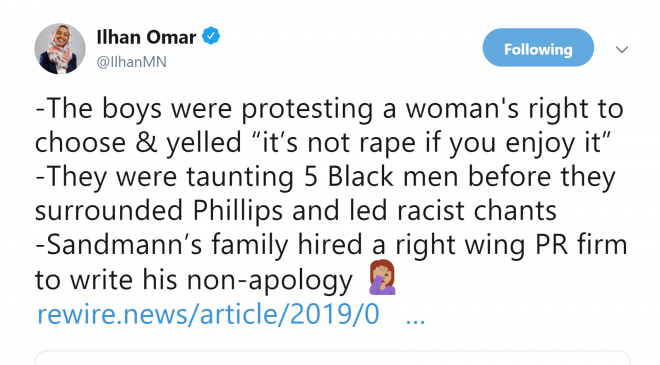 She also criticized the Catholic children for hiring “a right wing PR firm” to help represent them.

Her comments prompted widespread backlash on social media, since her claims run counter to what the nearly two-hours of video shows. The “[five] black men” mentioned by Omar were identified as members of the Black Hebrew Israelites, described by the Southern Poverty Law Center as a group that is “growing increasingly militant.”

The video shows the Black Hebrew Israelites taunting students at the March for Life, calling them “dirty ass crackers,” “dirty animals,” “racists,” “bigots,” “faggots,” “incest kids,” “white crackers,” and more. At one point, they tell an African American student that his white peers will “harvest his organs,” seemingly a reference to the movie “Get Out.”

Attorney Robert Barnes, who has offered to represent the students involved, told The Minnesota Sun that Omar, and any other media outlets, celebrities, or journalists who have made false statements about the students, have 48 hours to retract their comments.

“If she doesn’t retract what she said, she will be sued next week,” Barnes said.

One Thought to “Attorney: Ilhan Omar ‘Will Be Sued Next Week’ If She Doesn’t Retract Comments About Covington Catholic Incident”