The Battleground State Report, airing Fridays at 8 am CST with Steve Gill, Michael Patrick Leahy, and Doug Kellett – is a one-hour radio show from Star News Digital Media in the early stages of a national weekend syndication rollout. Gill and Leahy chatted about how a Democratic presidential candidates’ ‘authenticity’ would play out for voters in the battleground states.

As the segment drew to a close, the men reflected upon a recent Emerson college national poll and it’s results and felt that those numbers were irrelevant to the average blue-collar voter in the battleground states. 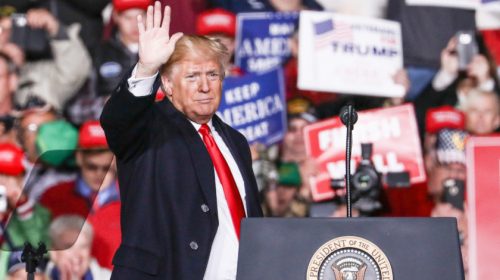 Leahy: To me, that authenticity, real understood, verifiable, authenticity matters. And like [President Trump] or not. Like how he is, what his style is, whether you think it’s offensive to be a big fan of supermodels as he is or whatever. He’s an authentic guy and I think that probably helps in battleground states where authenticity is more important than ideology in some cases.  And then you know, let’s look at the Democrats. Who comes across as authentic in a way that somebody from Ohio could relate to.

Gill: You know Biden could be the only one that could have talked about brackets like a guy in a bar talking with folks about who you thinks going to win. The rest of the crowd would have been picking the Ivy League to win it all and only one Ivy League makes it in and they were knocked out in the first round. Yale. There’s no connection that they have. While we’re talking about the brackets it’s ultimately do they have a connection with that blue-collar worker who’s worried about losing their job. Who’s worried about foreign competition. You’ve got one President who’s spoken up to make America great again, to put America first. And you have all these other candidates who want to supplant that President who want to put America down the list. Who want to go back to the Barack Obama game plan of let’s bow and scrape to foreign countries and apologize to foreign countries. I don’t think this group is going to wean those make America great blue-collar Democrats from those battleground states to their side by attacking President Trump for wanting to make America great.

Leahy was certain that President Trump’s authenticity in the battleground states would serve him well and also suggested that some of the Presidential candidates may possess a certain aspect of authenticity in the battleground states but Gill added that the key to a supposed victory would be to keep their messaging simple. He listed those issues as abortion, illegal immigration, how the economy is doing better than it was before Trump. Leahy then asked, what authenticity will appeal to Independent voters. He commented that Elizabeth Warren, a liberal from Massachusetts was a ‘no way’ in terms of authenticity. He added that South Bend, Indiana Mayor, Pete Buttigieg, even though he is authentic, won’t appeal to voters because he seems more concerned with his ‘LGBTQ authenticity’ which alienates other people and would not appeal on a broad spectrum. “Who could reach the Independents?,” Leahy asked. In answer to that question, Leahy stressed he just doesn’t see anyone based on the current roster of candidates. He hinted that maybe Beto had a shot with the Democratic desperation to beat Trump. Gill asked the question of whether Americans were worried about whether we have an electoral college or not and made it clear that he felt that voters aren’t worried about what the Democrats are currently touting.

Gill: There are issues that really affect people’s lives. Fighting about the electoral college and let’s stack the Supreme Court with five new members so we can push your left wing agenda. Oh, and by the way, let’s kill babies just before they’re born and after they’re born. None of those things are going to cater to the American people.

Leahy: And even if we look at this national poll that Emerson college, that we talked about in the earlier segment. So on the national side. Again it’s just a national poll. So you got heavy California. Heavy New York. In their poll of one thousand one hundred and fifty-three voters across the country, they have basically a statistical tie between Trump and everybody, except Biden had a ten point lead.

As the segment concluded Leahy was convinced that this national poll was irrelevant and that in order to see a more accurate picture they would need to be looking at the battleground states where things will be very different. Gill added that the average white, blue-collar Democrat is not going to find it’s way back to the Democratic party with reparations being a big motivator. He added that a Hispanic voter in South Florida isn’t going to be motivated to vote Democrat by raising his or her taxes to give reparations to black people who never were slaves in the first place.  Gill joked that the Democrats should keep talking those issues because he didn’t think they’ll be working out well for them.

Listen to the full show here:

Tune in every Friday morning and listen to The Battleground State Report with Steve Gill, Michael Patrick Leahy, and Doug Kellett.