MEDINA, Ohio — The Medina City Council, all men, voted five to two Monday night in favor of Ordinance No. 112-19, which prohibits “discriminatory conduct on the basis of sexual orientation and gender identity or expression.” The ordinance applies to housing, employment, and public accommodations.

Ordinance No. 111-19 also passed by a vote of six to one. It prohibits intimidation on the basis of sex, gender identity or expression, or sexual orientation.

Dennie Simpson, a council member from Ward 2, supported the ordinances. “We have been working with the local diocese on the language to protect religious organizations,” he said. “This is primarily about housing and employment rights.”

Council Member Bill Lamb, who claimed credit for initiating the ordinances, thanked the St. Francis Xavier Diocese for its assistance. The support of some council members and Mayor Dennis Hanwell had been in question until changes were recommended by the diocese and its attorney, Kevin Burke. The church and its school are both exempted.

Gwen Stembridge of Equality Ohio attended the meeting. She told The Ohio Star that some local residents had contacted them and asked for help. 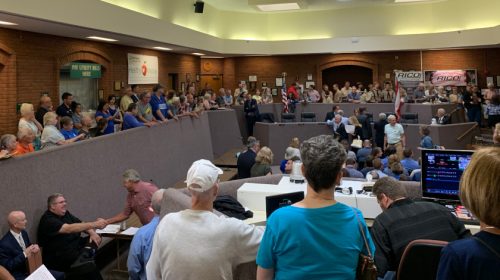 Equality Ohio had arrived early and filled the room with activists, many of whom came from outside of Medina, although some were local. All the seats on the floor were filled, the majority of people sporting rainbow stickers. As it got closer to meeting time at 7:30, opponents of the ordinances began filling up the remaining space.

“We’re here to support the residents,” Stembridge, from Cleveland, said. She noted that 24 other communities in Ohio had already passed similar legislation.

Over a dozen people spoke to the City Council about the ordinances. The number of supporters just edged out the number of opponents.

Chris Long, president of Ohio Christian Alliance, an opponent, told the City Council: “I am here to represent a number of concerned citizens here in Medina. Some residents are afraid to speak out because of fear of reprisal.”

Reverend Keith Rasey spoke in support of the legislation. A local Baptist pastor shared passages from the Gospel and talked about how everyone sins and Jesus paid the price for all. A retired Lutheran minister was also in attendance, and said, “It’s not the church that needs protection – it’s the LGBTQ community.” She opposed the carve out for the Catholic church and for any other church.

One mother with daughters in the city high school told the Council about two boys in Connecticut who just won the girls’ state track and field championships – taking scholarships and opportunities away from the female competitors. She shared how Title IX was created to give young women the same opportunities male athletes had, and now that will be eliminated.

After the meeting, The Ohio Star asked the city’s law director, Gregory Huber, whether “public accommodations” included Medina City Schools. He stated that during school hours it would not, but afterward, during any event open to the public, it would.

Huber also said that all the schools he knew in the area had adopted the “Obama Letter” rules from May 2014, which requires all public schools to “treat a student’s gender identity as the student’s sex for purposes of Title IX and its implementing regulations.”

The law director claimed all area schools were continuing to use the Obama letter as guidance, in spite of the Trump Administration’s rescission of it. A message left with Medina City Schools to confirm they were following the Obama mandates was not returned.

“The citizens are considering an initiative petition referendum to overturn the action of council. That’s a possibility,” Long told The Ohio Star after the meeting. “Also there is an election coming and the filing deadline is August 7th. There are citizens who are interested in unseating the members of council who voted in favor.”

One person suggested the Medina legislation was really about Senate Bill 11, which “adds sexual orientation and gender identity or expression to the list of protected classes in existing prohibitions against unlawful discriminatory practices,” for the entire state, according to the Senate Fiscal Note.

“This was all about embarrassing and putting pressure on Senate President Obhof by passing this in his hometown.”