COLUMBUS, Ohio — An enthusiastic crowd stood in the rain at Rickenbacker International Airport Tuesday morning, waiting on the arrival of Vice President Mike Pence. The vice president was in town to celebrate another manufacturing victory for the Trump administration — the expansion of Canadian company Magna Seating.

The Ohio Manufacturers’ Association trumpeted the event on Twitter. Magna Seating is a subsidiary of Magna International, Incorporated. They are still hiring for the new Lancaster plant. The Lancaster-Eagle Gazette announced in March the company plans to fill 300 positions.

People from all over Ohio filled the fenced-off area on the tarmac, anticipating the arrival of Air Force Two. A family of four from Canal Winchester looked forward to meeting the vice president. Pastor Bobby Mitchell, retired Air Force veteran and Republican candidate for state representative in Ohio’s 78th House District, brought his wife Janeisha and two children, Bella and Bobby Jr., to meet Pence.

“I’m here today because I want to welcome the VP to Ohio. This is a once in a lifetime opportunity. We are very grateful for the job that Vice President Pence and President Trump have done for America,” Mitchell told The Ohio Star.

Two concerned citizens from the Seneca Anti-Wind Union ventured to southeastern Columbus to see the VP. Ed Clark and Shanna Price were wearing t-shirts emblazoned with the issue. The grassroots group of concerned citizens supported protecting nuclear power in House Bill 6, but were hoping to also have language that would have given local jurisdictions and citizens the ability to veto wind farms. They wanted to share their concerns with the second most powerful man in the country – and he even signed their shirts. 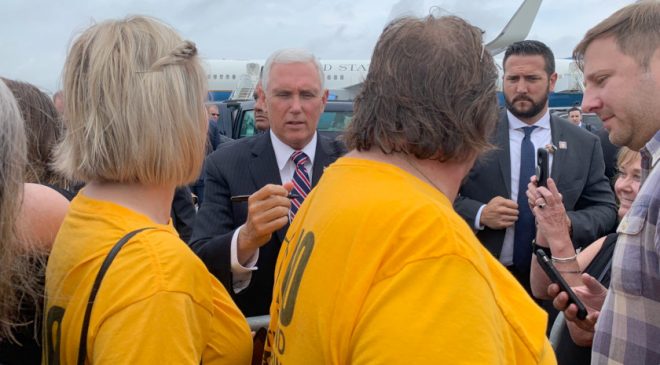 Cathi Nelson, a Delaware County resident, met the vice president for the first time in March. She was able to greet him when he came to Columbus for the 2019 Ohio Oil and Gas Annual Meeting. At that time, Pence pointed out her pin, an American flag and Israeli flag together, and told her, “We will always stand with Israel,” an issue near and dear to Nelson’s heart.

This time Nelson had the opportunity to shake Pence’s hand and give him some encouragement. “I just wanted to let you know that on Mondays between 9 and 10:30 we pray for you, we pray for Trump, we pray for Israel.”

“Thank you,” Pence told her warmly. “We feel it, we know it. It’s what’s getting us through.”

The vice president turned his attention to four soldiers before he left, taking the time to thank them for their service, shake their hands and get some pictures.