Among the U.S. states, Ohio is the sixth-most populated with more than 11.6 million people, many of them located in major population centers like Cleveland, Cincinnati and Columbus. But the rate of population growth in the Buckeye State has been largely stagnant for decades, lagging far behind that seen by the nation as a whole.

When it comes to state government spending, however, it’s another story entirely. And when the spending increases of the past 30 years are juxtaposed with the negligible population growth over the same time period, the contrast can be jarring.

Inflation-adjusted spending for the general revenue fund has risen six times faster than the state’s population growth within the past three decades, according to an analysis conducted by The Center Square. 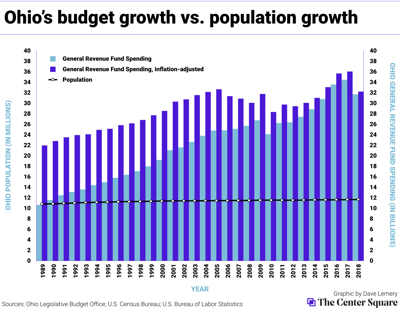 After being adjusted for inflation, the general revenue spending in the state has gone up from nearly $22 billion in Fiscal Year 1989 to about $32.25 billion in Fiscal Year 2018. This is an increase of nearly 46.7 percent. Population in the state has risen from about 10.8 million people to about 11.7 million over the same timespan, an increase of less than 8 percent.

“Government spending in the state has generally exceeded combined growth in population and inflation, with the most recent budget approved this summer continuing this trend,” Andrew Kidd, an economist for the Buckeye Institute, told The Center Square. The Buckeye Institute is an Ohio-based, free-market think tank.

“Although the state has experienced budget surpluses recently due to good economic times,” Kidd said, “overspending can risk putting the state in a difficult situation where policymakers would need to make challenging cuts or increase taxes, which would hurt Ohio’s families and businesses.” 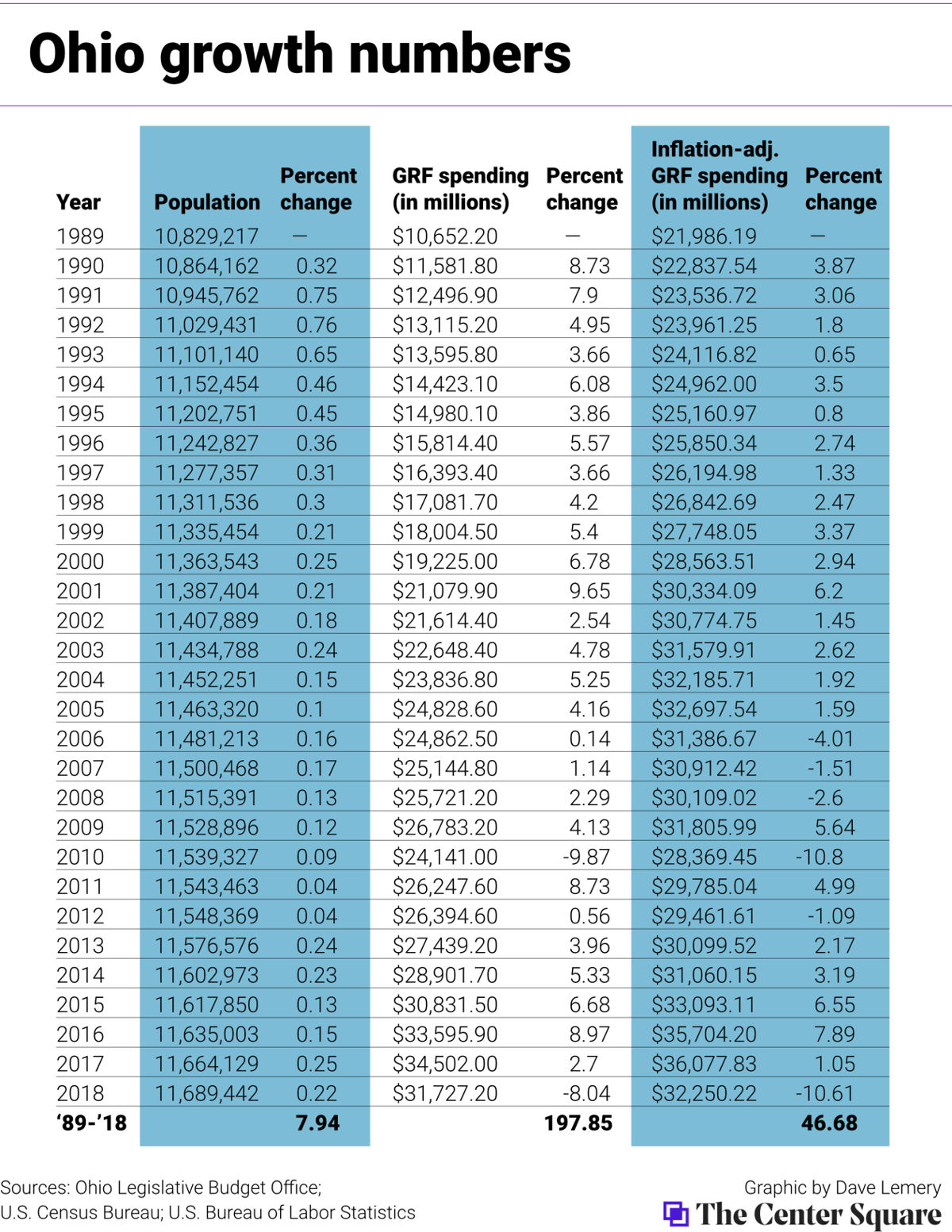 In the past 30 years, inflation-adjusted spending has increased in 23 years while decreasing in six years. In 22 of those 23 years, state spending increased at a higher rate than the population growth. Only in 1993 did the spending increase match the population growth. Some of its biggest spikes occurred in the early 2000s and then after 2014, with a decrease following in 2018.

Within the 30-year time period, the U.S. went through three different recessions: an eight-month recession in the years 1990 and 1991; another eight-month recession in 2001; and then the Great Recession that lasted a year and a half between late 2007 and mid-2009. Ohio state government spending increases continued during the first two recessions, but decreased during the Great Recession.

The most recent decrease in general revenue funding came in 2018. However, the 10.6 percent drop was mostly a result of a reallocation of Medicaid funding and not an actual decline in state spending.

The Buckeye Institute has consistently encouraged the state to tie its spending increases to inflation and population growth. Kidd said that he would like to see a spending cap so that government spending does not grow exponentially. He said that increased spending has become the default for governments during surplus years but that taxpayer money should be returned to taxpayers through tax cuts when times are good.

Kidd cautioned that significant government expansion crowds out private investment and that more spending can lead to higher taxes and budget deficits.

Other state spending not included in the general fund comes from other federal funds, special purpose funds (which are raised from specific sources, such as hunting license fees) and pass-through funds (which is money collected by the state and distributed to other entities, such as local governments).

Different scholars view this trend differently. While some are concerned about government spending continuing to rise, others note that spending needs are always fluctuating.

Ryan Bourne, the R. Evan Scharf Chair for the Public Understanding of Economics at the libertarian Cato Institute, told The Center Square that economists generally measure government growth in respect to total spending as a proportion of the economy, which has also increased over the past 30 years, but is projected to decrease in coming years.

“A bigger government puts a higher burden on the private sector of the economy, taking taxes and physical resources away from use in the more productive market sector,” Bourne said. “It reduces the growth potential of the state. It appears that the two biggest drivers of the increase in government size are pension spending and healthcare mandates over that period, the latter of which it is obviously more difficult to control.”

Wendy Patton, senior project director for Policy Matters Ohio, told The Center Square that she did not view the rate of government spending growth outpacing the population growth as a problem because the state’s needs are constantly shifting.

“The needs of Ohio have changed,” Patton said. “Poverty in the state remains much higher than before the recession [and] Ohio’s median hourly wage is well below the national average.”

Ohio’s median hourly wage is $17.96, and the national wage is slightly higher at $18.58, according to the Bureau of Labor Statistics.

Policy Matters Ohio released a report titled “Working for Less” that argued that many full-time workers with two children in the 10 largest job industries in Ohio are eligible for SNAP (food stamps) benefits and still need them. Patton said the state has lost potential resources through tax cuts.

“So the needs of the people have grown in Ohio’s low-wage economy, but revenues to support public services that help struggling families have been slashed,” she said. “So for the last [eight] years there has been under-investment in Ohio’s people.”

Brandon Cohen, a professor at the University of Toledo, told The Center Square that he is not too concerned by the spending growth.

“State government spending is a function of population, demographics, and program mandates all combined, which drive government size,” Cohen said. “But in general, if the state’s budget only went up 48 percent adjusted for inflation over a 30 year period, that is only a 1.5 [percent] per annum increase adjusted for inflation. This would only be significant if the state was borrowing to meet the budget growth and the state’s GDP was not growing at a reasonable rate. Ohio has not borrowed to meet this budget growth and [its] GDP is growing at a reasonable rate so I don’t see this budget growth/government size as a problem.”

However, if Ohio wants to compete with states that do not have an income tax, Cohen said that it would need to cut spending and shrink government.

The Center Square reached out to Republican and Democratic leaders in the House and the Senate, but none directly responded to questions about the growth in spending outpacing population growth.

John Fortney, a spokesperson for the Ohio Senate Republicans, said the legislature has worked to reduce the burden on taxpayers in recent years.

“Senate Republicans have led the way in eliminating four tax brackets over two general assemblies,” Fortney said. “We’ve cut income taxes across the board and reduced regulatory red tape leading to more than 500,000 new jobs since the recession. We fundamentally believe it’s your money first, not the government’s money. Reducing taxes and overly burdensome regulations helps grow the overall economy, while reducing the tax burden on hard-working Ohioans.”

Tyler Arnold reports on Virginia and Ohio for The Center Square.