WESTERVILLE, Ohio – John and Diane Stover from Ohio Value Voters and Linda Harvey from Mission America visited the Westerville Tea Party on Tuesday to speak to activists about the continued attempts to sexualize our children and what their organizations are doing to stop it. 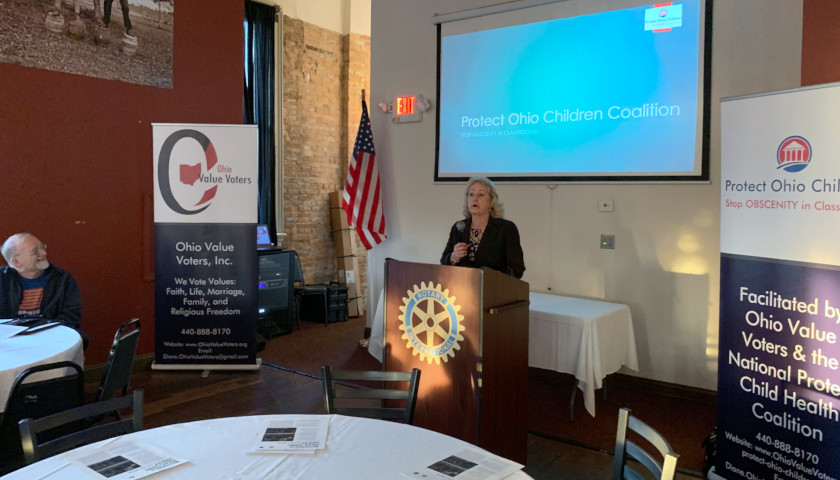 They discussed comprehensive sex education which they explain is illegally invading public classrooms in Ohio.  They also provided an update on legislation, including a bill that would prohibit children from dancing in drag in bars.

The Stovers have been working for more than two years to expose Planned Parenthood and their allies’ involvement in teaching comprehensive sexuality education in Ohio classrooms. Earlier this summer they presented their findings to the Legislative Leaders. Diane said elected leaders were disgusted with what they learned and have promised to act.

The Stovers also believe that teaching comprehensive sex education is a breaking the law per Ohio Revised Code 3313.6011.

The statute states that abstinence must be emphasized, and

(B) …that abstinence from sexual activity is the only protection that is one hundred per cent effective against unwanted pregnancy, sexually transmitted disease, and the sexual transmission of a virus that causes acquired immunodeficiency syndrome.

(C)(1) Stress that students should abstain from sexual activity until after marriage;

(2) Teach the potential physical, psychological, emotional, and social side effects of participating in sexual activity outside of marriage;

(3) Teach that conceiving children out of wedlock is likely to have harmful consequences for the child, the child’s parents, and society;

(5) Advise students of the laws pertaining to financial responsibility of parents to children born in and out of wedlock;

(6) Advise students of the circumstances under which it is criminal to have sexual contact with a person under the age of sixteen pursuant to section 2907.04 of the Revised Code;

(7) Emphasize adoption as an option for unintended pregnancies.”

Planned Parenthood of Greater Ohio offers this sex ed option: “Teens in your community could really use someone they know and trust to discuss topics life safer and consensual sex, STIs, and LGBTQ+ inclusivity. if you know someone between the ages of 14 and 19 who would be interested in these topics our Peer Education program may be a great fit for them…”

Harvey told the attendees that God has called her to, “Uncover the issues of  homosexuality and gender confusion and how this is being taught and manipulated in our schools.”

She explained that anti-bullying curriculum has been used to incorporate the LGBTQ agenda into the schools already, but the Obergerfell decision gave sex ed a shot in the arm. “All of a sudden they’re all part of the resistance but they’re also allies to sexualize children and are using sex ed to do it.”

“One of the ways they’re doing it is pushing LGBTQ inclusive behavior into sex ed,” she shared.

At the end of the presentation, John Stover provided a legislative update.

He announced that State Senator Tim Schaffer (R-Lancaster) has introduced Senate Bill 187, a companion bill to House Bill 180 which, “Prohibit[s] a sexually suggestive performance by a minor and, if the offender is a D liquor permit holder, to require the court to order the revocation of the permit.” In other words, minors would not be permitted to dance in drag at bars. This scenario occurred in December in Lancaster, and it the reason Sen. Schaffer introduced the bills.

Additional legislative issues on which Ohio Value Voters is working include requiring transparency for sex education and showing curriculum titles on the Ohio Department of Education website, and the Pastor Protection Act which would protect church leaders in the event they are sued for refusing to allow their buildings or themselves to be used by LGBT activists to perform homosexual weddings.

Westerville Tea Partiers learned that their school district is also using a pro-LGBT organization, Syntero, to help with their sex education programs. Members were encouraged to look into it.