The best thing about the 2019 We the People Convention is that we are meeting THIS September 21st to PLAN for the 2020 Election! Tom Z Explains why in this video:https://t.co/aPr3hnk1mP

The Pledge and prayer kicked off the morning. Attendees received a packet of information with a “to do” list that included, in part:

Don Brey spoke to the group about election law, noting that we have, “A big problem with lying liberals who lie.” He shared the list of concerns the people face from academia being overwhelmingly democratic, speech being censored by big tech and voter fraud. One of the most important ways the people have to get involved, Brey noted, is to be a poll worker. The average age for Ohio poll workers is over 70, and they are key to protecting the integrity of the process.

Brey was followed by Eric Lee, an attorney for the Elections Integrity Unit of Judicial Watch. Lee told listeners the two purposes of Judicial Watch are to increase transparency and enforce conventional voter registration laws. 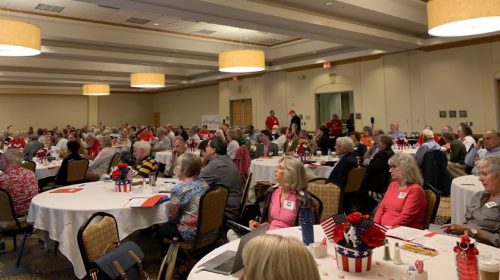 “My goal here at the end,” Lee announced, “is to get you all committed…to monitoring the voter registration rolls in your jurisdiction and making sure that the county boards are doing what they should do, what they’re required to, not only under Federal law which sets the floor, but under their own state laws.”

After lunch, Zawistowski called Catherine Engelbrecht, founder of True the Vote, to the podium and presented her with the Spirit of Freedom Award, the highest award given by the Ohio Liberty Coalition.

“What I love about True the Vote,” Tom Z stated, “is instead of playing defense, like we all do too often, they decided they would go on offense…and do something about voter fraud and elections…No person in this country was targeted more severely that True the Vote and Catherine Engelbrecht.”

“What got True the Vote on the radar early, was that we approached the study of election fraud in a very methodical way, in a way that threatened to expose what has being on for a very long time,” Engelbrecht explained. “Observation and engagement changes things; the sentinel effect changes things.” She received multiple standing ovations for her determination and activism that has contributed to exposing the corruption of the election system.

Secretary of State Frank LaRose addressed the gathering just after 1:00pm. His calls to action were, “First of all, voter registration. The other side has gotten better at this than we are…Each and every one of you needs to be an evangelist for voter registration.” LaRose told the group he had researched the issue and found the highest number of EBUs (eligible but unregistered) were in rural and Appalachian areas. LaRose also reiterated Don Brey’s call for poll workers.

The final speaker was NRA-ILA‘s David Conte. “A lot of the previous speakers talked about poll watching. I cannot agree enough,” Conte stated. He also commented on the news stories that cause many people to question the health of NRA. “90% of these news articles are coming out from The Trace…a [gun] news outlet that’s run by Michael Bloomberg.” It’s Bloomberg’s attempt to split the gun vote, Conte explained, but assured the audience the NRA has all the resources they need for 2020. NRAlegalfacts.org is a new website they have launched to answer the misleading news stories.

“When we saw Obama’s campaign apparatus, we realized that we could no longer have a passive approach to campaign management,” Conte said. When he reached the 2016 campaign, he declared “Quickly we realized there were some significant flaws with the state apparatus…From the NRA perspective, Ohio 2016 [the work by the NRA and the Tea Party combined] is the gold standard and every single year after that, our employees are held to what Ohio did in 2016…And Tom and each and every one of you that worked with us and worked in other capacities, you have so much to be proud of.”

Tom Z wrapped up the We the People Convention with an emotional plea to activism. “This is about doing things, not talking…We must stay focused on the things that are important to us.” (emphasis his) He outlined three action items: restore the rule of law, stop social media censorship and stop voter fraud.

Beth Lear is a reporter at The Ohio Star.  Follow Beth on Twitter.  Email tips to [email protected].
Photo “Tom Zawitoski” by We the People Convention.