COLUMBUS, Ohio – Freedom Foundation is a west coast group that has expanded to Ohio, “to reverse the stranglehold government unions have on…state and local policymaking.” The organization wants Governor DeWine to join their mission.

“I’d like to use this opportunity to call on Governor DeWine today to stand up to government union bullies and stand up for government employees,” National Director Aaron Withe said in the press conference announcing the expansion. “His actions could help set precedent here and throughout the nation.”

Withe opened the press conference by announcing the organization is open for business. “NEW: Freedom Foundation Expands Operations to the Buckeye State. ‘I’m excited to officially announce we are open for business in the state of Ohio,’ said @FFAaronWithe, @FreedomFdtn National Director.”

“I’m excited to officially announce we are open for business in the state of Ohio,” said @FFAaronWithe, @FreedomFdtn National Director

“Over the past five years, we’ve gone from being a statewide think tank, to a regional action tank, to now a national battle tank,” Wythe shared. “Our laser focus mission is to remove government unions’ influence from the political cycle.”

“The agenda of government unions in Ohio and nationwide is to raise taxes and regulations on the private sector, businesses and individuals for the purposes of growing government,” Withe explained. “These unions buy their political influence by using working public employees’ money to pay for campaigns of candidates that will agree to pursue their political agenda – that same agenda that seeks to destroy free market principles.”

Withe introduced Ohio’s new Director, Lindsey Queen. “Through outreach, we will be the boots on the ground for public employees across this great state, and inform them that it’s every American’s right to opt out of their union,” Queen said. She added that the group will also act through litigation and legislation. 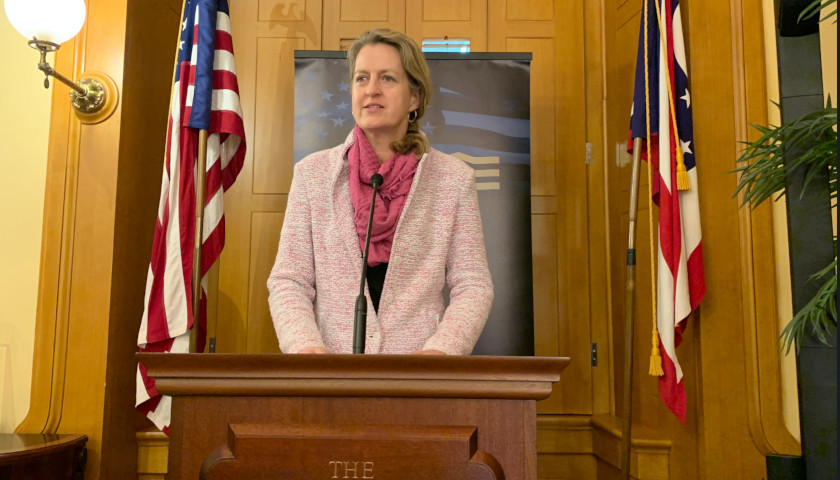 The Ohio Star asked, “Why have you chosen to expand to Ohio at this time?”

“We looked at 47 other states…our criteria for looking at them was based on, primarily union membership in those states, and for Ohio for example, it was a state affected by the Janus decision,” Withe responded. “It did not have right to work prior to the Janus decision, so it’s a young state where public employees generally were not informed that they can leave the union, so that was big in helping us make that decision.”

The Janus decision from the U.S. Supreme Court was issued on June 27, 2018. Justice Alito wrote, “…public employees are forced to subsidize a union, even if they choose not to join and strongly object to the positions the union takes in collective bargaining and related activities. We conclude that this arrangement violates the free speech rights of nonmem­bers by compelling them to subsidize private speech on matters of substantial public concern.”

State Senator Kristina Roegner (R-Hudson) joined Freedom Foundation at their press conference. “I am here today to welcome the Freedom Foundation to Ohio,” declared Roegner. “When I heard that their mission is to advance individual liberty, free enterprise, and they support limited and accountable government, well that was music to my ears. These fundamental principles of increased transparency, accountability and individual choice should hold true for collective bargaining in government as well.”

Ohio’s new Director declared: “With the Freedom Foundation, the time has come that the people know they have a choice. Today is the beginning of the end of government unions.”