When I was young, I hated being Latin and was embarrassed by it. All the macho overcompensation, the loud talking, the even louder clothes made of colors and fabrics not found in nature, the old-country ways, the conniving emotionalism, and the obstinacy I thought vulgar and crude. It turned me at a young age into an Anglophile. But as I grew older, I noticed something. Along with the crudeness there is a certain raw energy.

And along with the emotionalism, there is a potent force of action that expresses itself in over the top words and gestures that are reminders of the passions of the bloodline. Like Vulcans before they got hip.

Those reasons, and not many to do with policy or politics, are why perhaps close to 40 percent of Latins in the United States will likely vote for Donald Trump. Like him, the culture is loud, brash, and unmitigated by timidity. They will see, and have seen, a compadre more than they buy Dem agitprop over kids in cages at the border.

Of course, there were things I never disdained about being Latin like the food, the booze, and the music. Plus a kind of primitive unapologetic decadence that makes all of those better. A lunch of a well-made Calle Ocho Cuban sandwich dipped every three bites in frijoles negros, platanos, washed down with an ice cold mojito (never with Malta; that stuff is gross) while Jobim plays in the background is heaven itself for a civilized Latin.

And as a Latin who is being honest, you know by “civilized” I mean only Latins who are of my Colombian national heritage . . . just kidding. Kinda. 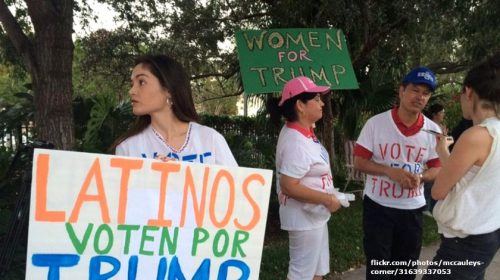 The “kinda” is another pro-Trump factor. For that reminds us that Latins are far from politically, culturally, or historically monolithic.

If you’re a Latin, you know, as Tom Wolfe pointed out in Back to Blood, that at least in South Florida, a Latin melting pot if there ever was one, “everybody hates everybody.”

OK, maybe hate is too strong a word. But Latins all know, and it’s generally kept secret from Anglos, there is a pecking order. It’s the nationalities with the most European blood up top and those of lesser at the bottom. Does it say wonderful things about us as a people? Nope. Nevertheless it’s the reality.

Luckily few know this or else the broader culture would stop buying into dumb concepts like “the Hispanic vote,” thus giving us Latins a conglomerate credit for way more political pull than we actually have.

I think some politicos think Latins have a secret, but well-catered, convention once a year where we all trade empanada recipes and decide en masse who will get our votes.

But Cubans vote differently than the Dominicans who vote differently than those of South American heritage like me. Thus, Latins are not politically monolithic. Just because our ancestors mostly (sort of) spoke the same language (except for the Puerto Ricans . . . Is that even Spanish? . . . Calm down . . . It’s a joke!) does not mean we think or vote alike.

Without even considering our personal histories, as Latins in the collective sense our nations of heritage all have individual histories, cultures, and idioms. One size does not fit all. Not counting Guayabera shirts on Cubans. They’re always in at least 2XL. (Oh, get over it.)

When these factors are put into play Latins will probably go for Trump in the biggest percentage in GOP history. The only thing that could interrupt that relative lovefest is a massive Puerto Rican turnout in New York and a huge Mexican turnout in Texas, both for the Democrats.

A not so quiet secret among Latins, however, could mean even better news for the president. The Mexicans already here like it and don’t want to stir the pot too much by inviting too many of their former countrymen to stay awhile. In other words, they are not as liberal on immigration as some may think.

The proof in the flan will be on Election Day. If we come out victorious then I’ll light up a Fuente, take a sip of Aguardiente, and bask in the indirect glory. If not, well, I’ll do the same except for the glory part.

I’ll consider all that my contribution to “the Hispanic vote.”

David Kamioner is a veteran of U.S. Army intelligence, serving with the Pershing Nuclear Brigade and the First Infantry Division. Subsequent to that he worked as a political consultant for over 15 years and ran a homeless shelter for veterans in Philadelphia for over four years. He is a public relations consultant in Washington, D.C. and lives in Annapolis, MD.
Image “Latinos for Trump” by Michael Vadon CC2.0.

One Thought to “Commentary: Latins for Trump? It Could Happen”