He did not specify what targets he has in mind.

Some Democrats say such a move could be considered an act of terrorism. 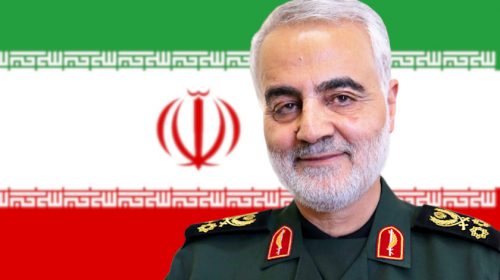 Senator Chris Murphy of the Foreign Relations Committee said targeting civilians and cultural sites is a “war crime” and said Congress must stop Trump from “a war entirely of his making. A war that will get thousands of Americans killed.”

The president also told reporters he “may discuss” releasing the intelligence he used to justify ordering Soleimani’s death.

Secretary of State Mike Pompeo is staunchly defending the drone attack outside Baghdad International Airport that killed Soleimani. But Pompeo has so far refuse to publicly share the evidence backing the administration’s claim that Soleimani was planning imminent attacks on U.S. forces and officials in the Middle East.

“There are simply things we cannot make public,” Pompeo told Fox News. “You’ve got to protect the sources providing the intelligence.”

On CNN, Pompeo said U.S. officials would continue to disclose information about the drone attack, but only “consistent with protecting our sources and methods and importantly our capacity to continue to understand what’s going on in presenting threats. You don’t want to risk that intelligence.”

Trump claimed Soleimani was responsible for the deaths of thousands of Americans, Iraqis and Iranians, saying the longtime Iranian general “made the death of innocent people his sick passion” while helping to run a terror network that reached across the Middle East to Europe and the Americas.

Many Republican lawmakers back Trump’s order to kill Soleimani.

Democrats say there is no doubt Soleimani was rotten and a killer. But they say Trump’s action increases the threat of a U.S.-Iran war.

Sen. Chris Van Hollen told Fox, “We’re now headed very close to the precipice of war,” adding “you just can’t go around and kill” world figures the U.S. opposes. “The president is not entitled to take us to war” without congressional authorization.

He posted a tweet Sunday, saying his “media posts will serve as notification to the United States Congress that should Iran strike any U.S. person or target, the United States will quickly and fully strike back and perhaps in a disproportionate manner. Such legal notice is not required but is given nevertheless!”

Yale University law professor Oona Hathaway tells VOA the president cannot notify Congress of his intent to go to war by tweet and said he would be breaking several laws.

“Any time the president involves the armed forces into hostilities, he must — at a minimum — notify Congress within 48 hours,” she said.

Hathaway added that a president is obligated to consult with Congress before putting the armed forces into any hostilities. She said a “disproportionate” response would break international law, which says any action taken in self-defense must be proportionate to the threat.

“That any of this has to be said suggests just how insane this situation has become,” Hathaway said, wondering where are the lawyers from the White House, Pentagon, and State Department.

Also Sunday, Iran said it is no longer limiting the number of centrifuges used to enrich uranium– a virtual abandonment of the 2015 nuclear deal.

“Iran’s nuclear program will have no limitations in production including enrichment capacity and percentage and number of enriched uranium and research and expansion,” a government statement said.

Iran did not make any explicit threats to build a nuclear weapon, something it has always denied it wants to do. It also said it will still cooperate with the International Atomic Agency.

Iran has been gradually backing down from a promise made in the 2015 deal since U.S. President Donald Trump pulled the U.S. out in 2018 and reimposed sanctions on Iran. The European signatories — Britain, France, and Germany — have been urging Iran not to pull out.

Also Sunday, Iraq filed an official complaint with the United Nations secretary-general and the Security Council over the missile strike on Soleimani which was carried out on Iraqi soil.

The foreign ministry called the attack “a dangerous breach of Iraqi sovereignty and of the terms of the U.S. presence in Iraq.” It is asking the Security Council to condemn the action.