While pressing her agenda to expand means-tested welfare programs, Democratic Congresswoman Alexandria Ocasio-Cortez is claiming that the federal government’s poverty statistics vastly undercount the number of Americans who are “destitute.”

In reality, the exact opposite is true because those statistics omit a broad range of government benefits, charity, and unreported income. When these are counted, the poorest fifth of U.S. households consume five times more goods and services than the poverty stats reveal. These material resources amount to an average of more than $50,000 per household per year, making the poorest fifth of Americans richer than the averages for all people in most developed nations of the world.

In a recent video, AOC alleges: “You would not know that our country is posting record profits because 40 million Americans are living in poverty right now, and if the poverty line was real—if it was around what some people think it should be—about $38,000 a year, we will be shocked at how much the richest society on the planet is allowing so much of its people to live in destitute [sic].”

Her number of 40 million is roughly equal to the Census Bureau’s figure of 38.1 million, or 11.8% of the U.S. population. This represents merely one of the widely different ways of measuring poverty, but it is the federal government’s official measure, and the media follows suit. As stated in a 2019 paper in the American Economic Journal: Applied Economics: “The official poverty rate is also one of the most cited government statistics in the popular press.”

Without vital context—which AOC and most news reports fail to provide—the oft-cited Census poverty stats are highly misleading. For as the Census Bureau explains, they don’t “include the value of noncash benefits such as those provided by SNAP [Food Stamps], Medicare, Medicaid, public housing,” and a host of other goods and services that the poor receive from government and charities. More specifically:

Furthermore, Census income and poverty figures are obtained through household surveys, and low-income households don’t report much of their cash income in such surveys. Regarding this:

An official federal measure that accounts for all of people’s material resources is called “consumption.” Recorded by the federal government’s Bureau of Economic Analysis, it is a comprehensive measure of the goods and services consumed by households. It is also the World Bank’s “preferred welfare indicator, for practical reasons of reliability and because consumption is thought to better capture long-run welfare levels than current income.” Significantly, a 2003 paper in the Journal of Human Resources explains that “consumption standards were behind the original setting of the poverty line,” but government changed to the current method because of its “ease of reporting.”

The Bureau of Economic Analysis normally reports consumption for the entire nation and doesn’t break down the data to show how people at different levels fare. However, it published a report in 2012 that does that for 2010. Placed side-by-side with the Census Bureau income figures that underlie it’s poverty stats, the differences are striking—particularly for the poorest and richest U.S. households: 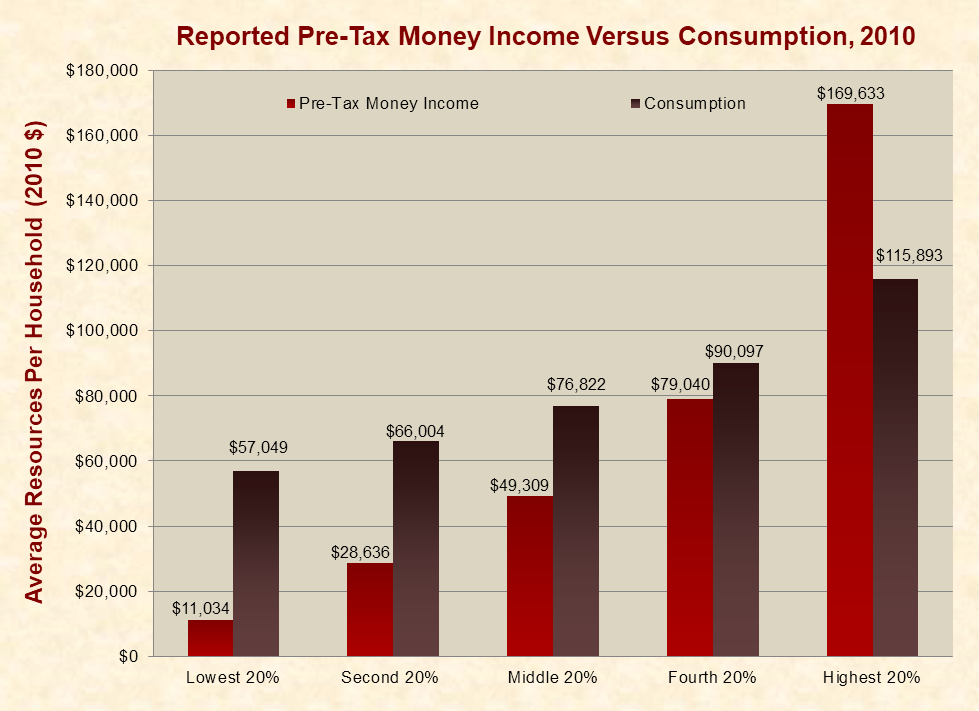 The federal data graphed above shows that the poorest 20% of U.S. households consumed an average of $57,049 of goods and services per household in 2010, while they reported an average of $11,034 in pre-tax money income to the Census Bureau. This means that widely reported federal poverty stats exclude about 80% of the material resources of low-income households. Put simply, the poorest fifth of U.S. households consume five times more goods and services than the poverty stats reveal.

AOC argues that the federal poverty line for “1 earner & a mother home full-time” should be $38,000/year, as compared to the current line of about $26,000 for a family of four. She attempts to justify this by saying that the current line “doesn’t include cost of childcare, geographic cost of living, or healthcare.” What she neglects to say is that low-income households typically receive such items and many others for free or greatly reduced prices.

In contrast, most U.S. households earn their healthcare, housing, food, childcare, phone service, and such for themselves, while also paying taxes that fund these items for others. As a result, U.S. middle-income households consume only 26% more goods and services than the poorest fifth.

The impacts of this wealth redistribution are even more drastic for the richest fifth of U.S. households, who forfeit a large portion of their income to taxes and receive few government benefits. They report 15 times more pre-tax money income than the poorest fifth of households, but they consume only twice as much goods and services as the poorest fifth.

Given that the available data treat the poorest 20% of households as a single group, while 11.8% of U.S. residents are officially in poverty, one might assume that poor households consume markedly less than the $57,049 average for the group. However, other government data suggests that is not the case. The U.S. Bureau of Labor Statistics collects data on a subset of consumption called “consumer expenditures.” These show a mere $2,179 difference between the lowest 10% of U.S. households and the second lowest 10%. Since consumer expenditures exclude many forms of non-cash welfare, and eligibility for welfare declines as income rises, the poorest 10% may consume more goods and services than the second-poorest 10%.

Contrary to AOC, the facts are clear that frequently reported federal poverty stats vastly overstate the number of Americans who are destitute. Moreover, Just Facts’ recent study of data from the World Bank and the U.S. Bureau of Economic Analysis reveals that the poorest fifth of Americans consume more goods and services than the averages for all people in most developed nations of the world. In spite of these facts, AOC decries “economic injustice in America” and insists that the U.S. cannot “capitalism our way out of poverty.”