Now that the four-and-a-half-month-long Ukraine impeachment bookend to the 22-month Mueller charade is over, it clearly accomplished nothing other than substantially raising the polls of both Donald Trump and the Republican Party. The public was reminded that Representative Gerald Nadler (D-N.Y.) and House Speaker Nancy Pelosi (D-Calif.) are every bit as childish, peevish, and absurd as Rep. Adam Schiff (D-Calif.).

So, we are now back to the existential issue of the entire Trump phenomenon: to what degree did the Hillary Clinton campaign collude with high-ranking Obama officials, and the top echelons of the FBI, CIA, and the national intelligence apparatus, to surveil, defame, and hope to derail Donald Trump’s 2016 presidential campaign by unlawful means?

Who in the federal government then continued Clinton’s efforts after the 2016 election to disrupt and indeed attempt to destroy the Trump transition and presidency?

Eventually, someone will sort out whether that post-election effort on the part of federal officials to abort the Trump presidency, abetted by the media and #TheResistance, was a simple follow-up to the Clinton-DNC-Perkins Coe-Fusion GPS collusion against candidate Trump—or a sick preemptive attempt of the administrative state to smear Trump as a “Russian asset” because of their worries about the exposure of their own prior criminality and Trump’s iconoclastic agenda.

But for now, the following statements are irrefutable.

Donald Trump, in concrete ways, has been far harder on Russia than was the “reset” Obama presidency, and far more helpful to Ukraine than Team Obama ever was. Trump armed the Ukrainians. He upped sanctions against Russia. He ordered lethal retaliation against Russian mercenaries in Syria. He vastly increased U.S. oil and gas production to Russia’s detriment. He jawboned Germany about its fuel dependence on Moscow. He coerced NATO to spend more on defense. He got out of an asymmetrical missile treaty with Russia. He is rebuilding the U.S. military.

Unlike his predecessor, Trump did not dismantle U.S.-joint European missile defense in order to coax Putin into behaving during his reelection bid. He did not push a big plastic red reset button in Geneva to mark outreach to Putin, in rejection of prior Bush sanctions on Russians. He did not forbid the shipment of anti-tank missiles to an endangered Ukraine. He did not invite the Russians into Syria after a 40-year hiatus from the Middle East.

So the libel of Russian collusion was absurd from the get-go.

It originated in 2015-16 when the deep state was terrified over the then unlikely possibility of a President Donald Trump. The “collusion” ruse involved the chief players of federal law enforcement and national intelligence agencies. All, of course, had assumed Hillary Clinton would be president and their extralegal efforts to “insure” her victory would soon be commensurately rewarded, regardless of the illegality and unethical behavior required. And both crimes and amorality were most certainly involved.

See No Evil, Hear No Evil

The litany of these systematic abuses constitutes the greatest scandal in American history. 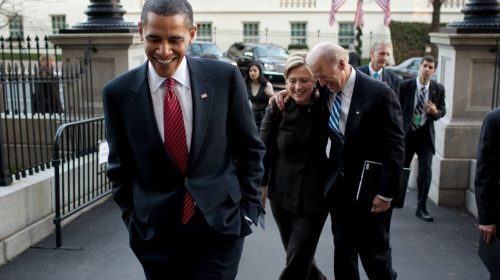 The FBI and the Justice Department deliberately misled Foreign Intelligence Surveillance Court judges to spy on an American citizen as a way to monitor others in the Trump campaign. That crime is a charitable interpretation of Justice Department Inspector General Michael Horowitz’s report, given that supposedly intelligent federal judges were told that the evidence for such state espionage was based on the “opposition research” of the 2016 campaign. And yet apparently in see-no-evil, hear-no-evil fashion, not one of the squishy judges ever asked the U.S. government, who exactly had paid for the Steele Dossier and why? After all, who was the “opposition” to Trump in late 2016?

Top Obama officials, such as Samantha Power and Susan Rice, in a panic over the Trump candidacy and then victory, requested the unmasking of scores of redacted names of those surveilled by intelligence agencies. Some of those names mysteriously, but certainly illegally, were leaked to the media with the intent of defaming them.

When Adam Schiff’s pernicious role in jump-starting the impeachment is finally fully known, he will likely be revealed as the prime schemer, along with minor Obama officials buried within the Trump National Security Council, dreaming up the entire Ukraine caper of the “whistleblower.”

Over the past three years during the Russian and Ukrainian farces, Schiff variously lied to the public about impending “bombshell” revelations of Trump “collusion.” His minority House Intelligence Committee memo outrageously alleged that the Steele dossier was accurate and truthful and yet was not the prime evidence for the granting of FISA warrants – two more lies exposed by Horowitz.

Schiff rigged the initial House impeachment hearings to exclude transparency and bipartisan access to witnesses. He read a false version of the Trump conversation with the Ukrainian president into the congressional record. He secretly data mined his own colleagues’ communications. And to the very last moments of the entire fraud, even in his dotage, he was still babbling in the Senate about the long-ago discredited “Russian collusion” and again stringing together absurd fantasies of Trump wishing to sell Alaska to the Russians.

Justice for the Wrongdoers?

Schiff was given a great gift with a quick Senate acquittal. If he had been called as a fact witness, he either would have had to lie under oath to refute his earlier myths, or continue them and compound his falsities. 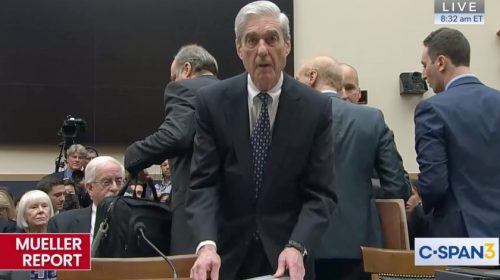 The Mueller investigation – 500 subpoenas, 22 months, $35 million – was one of the great travesties in American investigatory history. It was cooked up by fired, disgraced—and furious – former FBI Director James Comey. By his own admission, Comey conceded that he leaked confidential memos of private conversations he had with the president to create a large enough media and political storm to force the naming of a special prosecutor to investigate “Russian collusion.”

Comey is not yet in jail, in part, because his cronies at the FBI, including the disgraced Peter Strzok and Lisa Page, post facto, announced that the leaked Comey versions of his one-on-one talks with the president of the United States were merely confidential rather than top secret and thus their dissemination to the media was not quite felonious.

The rest is history. Comey’s leaking gambit paid off. It led to the appointment of his long-time friend and predecessor, former FBI Director Robert Mueller. Mueller then delighted the media by appointing mostly progressive activist lawyers, some with ties to Hillary Clinton and the Clinton Foundation, in what then giddy journalists called a “dream team,” of “all-stars” who in the fashion of a “hunter-killer” team would abort the Trump presidency. They would prove Trump was what former Director of National Intelligence James Clapper on television called a “Putin asset.”

In surreal fashion, the main players, under suspicion for seeding and peddling the fraudulent Steele dossier among the high echelons of the U.S. government and using such smears to cripple Trump – John Brennan, James Clapper, and Andrew McCabe – were hired by liberal CNN and MSNBC as paid analysts to fob off on others the very scandals that they themselves had created.

The proof of the pudding is in the eating, and the Mueller team finally had to concede that it was born out a conspiratorial hoax by finding after 88 weeks—punctuated by almost daily leaks to sympathetic progressive media – that there was no Trump-Russian collusion to warp the 2016 election. Nor did it find actionable obstruction of justice on the part of Trump to thwart the investigation of what was admittedly a non-crime. 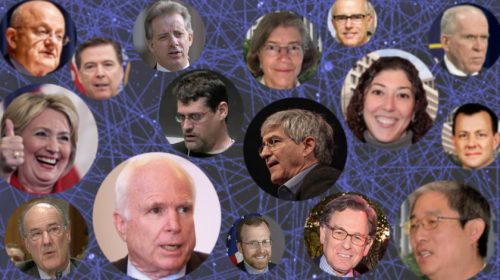 Yet Mueller’s team was marred with problems from the outset. The amorous and textually promiscuous pair of Peter Strzok and Lisa Page were both fired for their rank partisanship, although Mueller and his team initially hid the reasons for their departures and staggered their firings to suggest a natural rotation. Mysteriously, hundreds of their incriminating texts have disappeared from FBI smart devices—a weirdness reminiscent of the FBI’s willingness not to examine Hillary Clinton’s computers that were hacked, as well as apparent unconcern that she destroyed thousands of subpoenaed emails.

Eric Clinesmith, another FBI lawyer, was fired by Mueller inter alia for his left-wing biases and tweeting out “Viva le [sic] Resistance”—as in long-live the World War II-like progressive resistance against the fascist and foreign occupier Trump. Clinesmith, according to the inspector general, altered an email presented as evidence before a FISA court to warp the request to surveil Carter Page. If there is any justice left in this sordid mess, he will end up in jail.

The end of the Mueller team was equally unceremonious. Mueller himself proved enfeebled in an embarrassing testimony before House committees, marked by the stunning admission he really had no idea what Fusion GPS was—the Glenn Simpson monstrosity that had hired the charlatan Christopher Steele, spawned the collusion myth and compromised top Justice Department officials such as Bruce Ohr, whose spouse worked for Simpson on the dossier.

When Mueller’s legal ramrod, progressive Andrew Weissman, finished up running the day-to-day operations of the “Mueller investigation,” in parody fashion he went to work—but of course—as a paid analyst for CNN where he no longer publicly had to suppress his loathing of the former target of his investigations.

The net effects of the Mueller and Horowitz investigations were variously to exonerate Trump, to expose a corrupt Justice Department, CIA, and FBI, to illustrate how the government hounded and ruined the lives of minor 2016 Trump campaign officials with largely process convictions and plea-bargained confessions, and to explain the peremptory resignations of more than a dozen top Washington officials of James Comey’s FBI—as well as the railroading General Michael Flynn.

Some of that skullduggery and more are currently the subjects of a criminal investigation by U.S. Attorney John Durham. The American public has been assaulted for four years by an array of fake scandals, fake bombshells, and fake televised analyses that camouflaged a systematic and terrible assault on our constitutional freedoms.

But soon the worm may turn. The real scandal is back on the horizon, and at last, we may learn that no one is above the law, and most certainly not a group of smug and mediocre apparatchiks who assumed they had the moral right to destroy a presidential candidate and later an elected president.

In sum, this real scandal, dormant for over four years, had been overshadowed by a series of progressive-government-media driven melodramas, aimed at both injuring the Trump presidency—and, in preemptive fashion, shielding a virtual coup to destroy an elected president.

Recreational Marijuana Could Be on Ohio Ballot in 2020