A report released last week claims that a federal ban on fracking would cost the Ohio economy an estimated 500,000 jobs in a single year.

The report was commissioned by the American Petroleum Institute (API) and conducted by OnLocation, Inc., an economic modeling firm. Fracking is short for hydraulic fracturing, a drilling technique used for extracting oil and gas.

Several Democratic presidential candidates and various members of Congress have called for a federal ban on the practice.

API’s report warns that a ban would have “dire economic consequences” on the country, costing up to 7.5 million American jobs in 2022 alone. Additionally, a fracking ban would lead to a cumulative GDP loss of $7.1 trillion by 2030, reduce household incomes by $5,400 annually, increase household energy costs by more than $600 per year, and cut farm incomes by 43 percent due to higher energy costs, claims the report.

“You can’t eliminate the very technology that has enabled the American energy revolution without damaging economic consequences,” Lessly Goudarzi, founder and CEO of OnLocation, said in a press release. “As our analysis shows, assuming a full ban on fracking would threaten a U.S. recession and force American consumers to rely more on foreign energy rather than energy produced here in the U.S.” 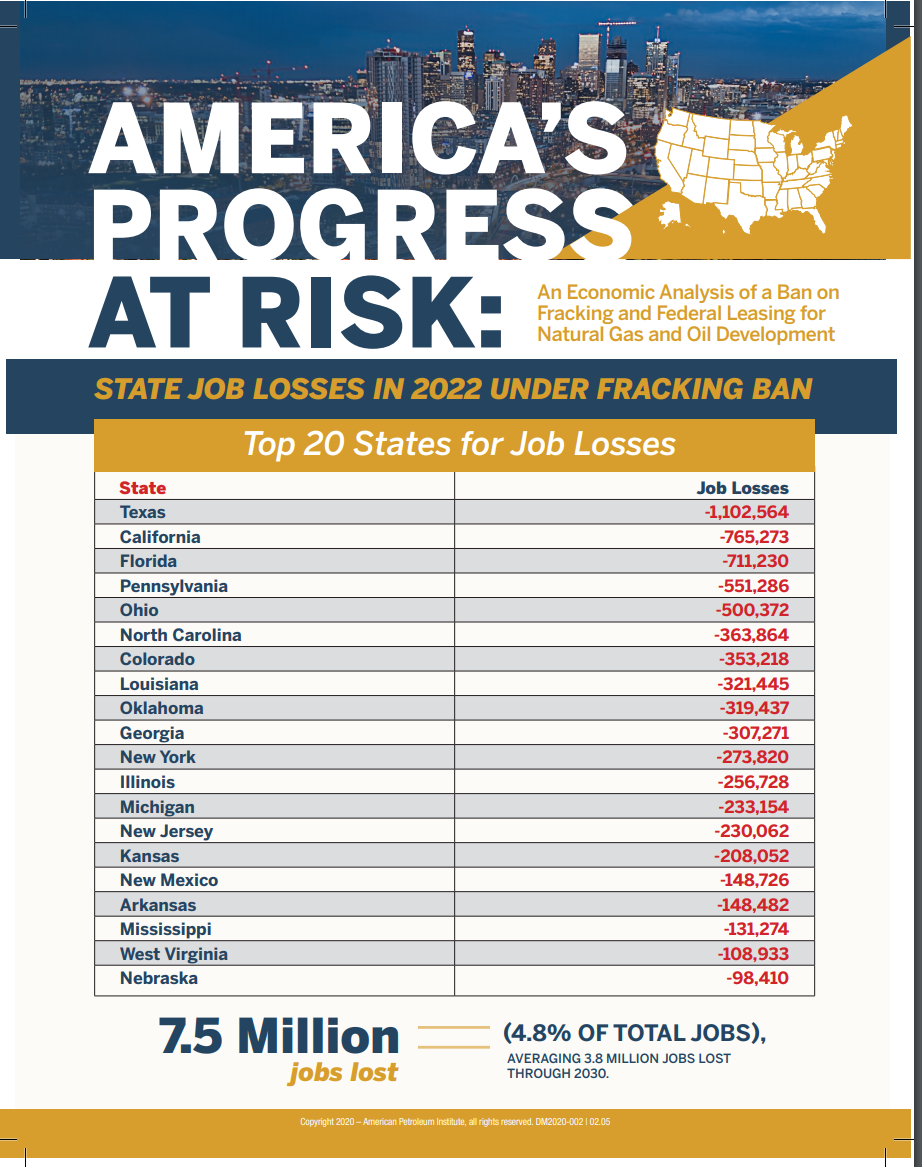 Combined, that adds up to 3.6 million job losses in those five states alone in the first year of a federal fracking ban.

“If I told you about a technology that would help the environment, that would help American consumers, would reduce our trade deficit and increase American jobs, I think most politicians would jump on that, not try to ban it,” API President and CEO Mike Sommers said.

“American families should be shocked to hear proposals from candidates for high office that would ban this transformative technology, which would erase a generation of American progress and return us to the days of heavy reliance on foreign energy,” he continued. “There is perhaps no better example that points to the stark contrast we see today in the debate over America’s energy future.”

According to the report, more than 95 percent of U.S. natural gas and oil wells today are developed using fracking. If a fracking ban were enacted, the U.S. would go from being a net exporter of oil and petroleum products to importing more than 40 percent of supplies by 2030.

The full report can be viewed here.

Anthony Gockowski is managing editor of The Minnesota Sun and The Ohio Star. Follow Anthony on Twitter. Email tips to [email protected]