When Ohio Gov. Mike DeWine went court shopping to quash the state’s primary Tuesday as a way to fight the coronavirus, one of three Supreme Court justices who abstained from voting in his favor was his eldest son, Justice Pat DeWine. 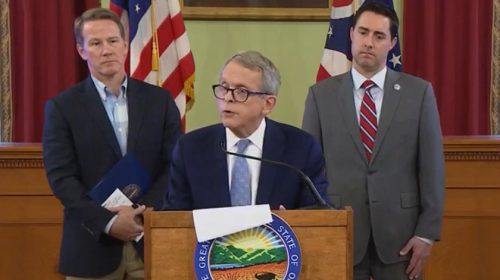 Earlier in the day, a Franklin County judge denied the state’s request to postpone until June 2 its primary voting originally slated for Tuesday.

Before that denial, Gov. DeWine sought his son’s coworkers’ help to block the elections. Justice DeWine abstained when the court voted 4-0-3 to deny the governor’s request.

Additionally, Gov. DeWine’s daughter, Alice, is on the ballot in the Republican primary for Greene County prosecutor and, according to one source, is expected to lose the race.

Who is Justice DeWine besides a judge who has a well-connected father?

He has also faced scandals.

His wife, Rhonda Dayton DeWine, filed for divorce in August 2019, citing “adultery, extreme cruelty and gross neglect of duty,” the Plain Dealer reported. She said in the filing she struggled to support herself since February 2018, when she said her husband cut her off financially after “abruptly” moving out of their Cincinnati home.

In a statement, DeWine spokesman Ryan Stubenrauch said: “This week, Justice DeWine’s wife filed for divorce in Hamilton County and they’ve been separated for approximately 18 months. As most Ohioans know from their own family experience, marital difficulties are always upsetting. Political gossip and false claims only make it worse. Out of respect for his family and children, Justice DeWine won’t be addressing this any further.”

Justice DeWine has also faced an accusation he used his position to get his son Matt, an internship.

A judge who went to jail on an indictment for mishandling a confidential document and helping her brother in a disciplinary hearing is arguing in her appeal that Justice DeWine allegedly used his position to get his son the job at the Hamilton County Prosecutor’s Office, WCPO said.

If DeWine was not prosecuted for helping a relative, the motion argues, Hunter shouldn’t have been either.

A spokesman for DeWine told WKRC that an ethics counsel had dismissed the allegations.

Jason M. Reynolds has more than 20 years’ experience as a journalist at outlets of all sizes.
Photo “Justice Pat DeWine” by Pat DeWine.