Huffman says it’s a “Population Density” issue. Manhattan Island in New York has 8 million residents in a 23 square mile area. Franklin County in Ohio has more than 500 square miles and 1.2 million residents. They have 800 confirmed COVID-19 cases. While the 3 senate districts in West Central Ohio have the same amount of residents total as Columbus, but only 200 confirmed cases.

Huffman is a first-term senator who served four terms in the Ohio House of Representatives, according to his biography. A lawyer, he served on the Lima City Council from 1992-2006, having spent the final seven years as City Council president. 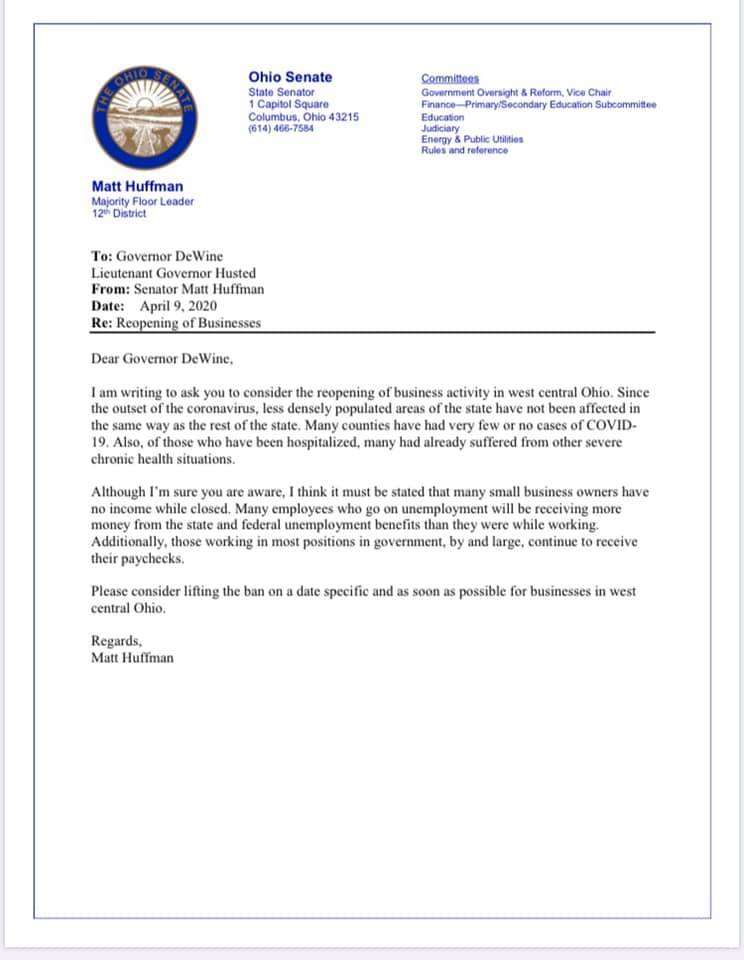 In his letter, Huffman wrote:

Less densely populated areas of the state have not been affected in the same way as the rest of the state. Many counties have had very few or no cases of COVID-19. Also, of those who have been hospitalized, many had already suffered from other severe chronic health situations.

Although I’m sure you are aware, I think it must be stated that many small business owners have no income while closed. Many employees who go on unemployment will be receiving more money from the state and federal unemployment benefits than they were while working. Additionally, those working in most positions in government, by and large, continue to receive their paychecks.

Please consider lifting the ban on a date specific and as soon as possible for businesses in west central Ohio.

She also showed her support on Twitter: “Very grateful to Senator @matthuffman1 for his common sense, pro-business approach for our region.”

Very grateful to Senator @matthuffman1 for his common sense, pro-business approach for our region. pic.twitter.com/eJ8SwFZEPS