Franklin County in Ohio saw another surge in drug-related overdoses last weekend, according to The Columbus Dispatch.

Since the Wuhan virus came to Ohio, Franklin County has been one of state’s hardest-hit areas in terms of overdoses.

“I think the pandemic has just made the situation worse for people, (with) unemployment, isolation,” the coroner told The Dispatch.

These high overdose numbers follow a disturbing pattern for the county. During the weekend from May 1 to May 2, Franklin County saw 28 non-fatal overdoses, Ortiz said on Facebook.

“As you may have seen, Friday night to Saturday night our county saw 28 non-fatal overdoses. This is a high number for our county. COVID 19 has showed us the vulnerabilities and deficiencies in our addiction services,” she said.

2020 has been a difficult year for Franklin County in terms of drug overdose-related deaths. Ortiz said from January to April 15, the county saw a 50% increase in fatal overdoses.

“We need to push narcan and even as important fentanyl test strips. Much of the cocaine here in Franklin County is cut with fentanyl and sold without people knowing,” she added. “We need to check in with those who use. And, we need to continue to advocate for wiser and better ways of treating those with addictions.”

As you may have seen, Friday night to Saturday night our county saw 28 non fatal overdoses. This is a high number for…

Ninety-one percent of overdose deaths were due to opioids, the report says. Furthermore, fentanyl, which is commonly found in opioids, was found in 81 percent of drug overdoses. 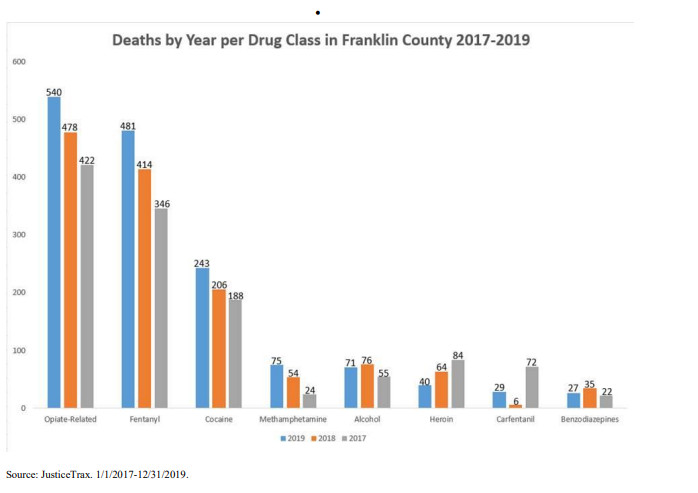