OKLAHOMA CITY, Oklahoma (AP) — So many people have expressed an interest in attending President Donald Trump’s rally Saturday in Tulsa, Oklahoma, that the governor said he’s asked the campaign to consider a larger, outdoor venue to accommodate them.

Gov. Kevin Stitt said Monday after talking with Trump and Vice President Mike Pence that nearly one million people have requested tickets to the event. Some Trump supporters have already started waiting in line outside the 19,000-seat BOK Center in downtown Tulsa.

“We’re excited we’re being recognized as one of the first states to safely and measurably reopen,” Stitt told reporters Monday. “I’m looking for a potential other venue that maybe we could move it outside. It’s still kind of in the works.” 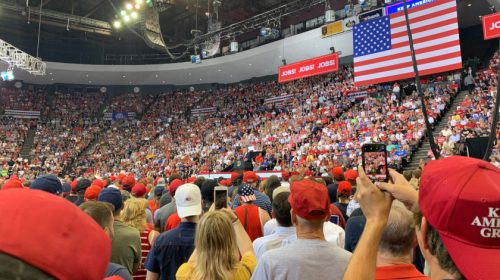 Stitt, who plans to introduce Trump at Saturday’s rally, said he also asked Trump and Pence to join him on a tour of the city’s Greenwood District, once home to a prosperous African American community dubbed Black Wall Street that was burned to the ground during a racially motivated massacre in 1921 that left as many as 300 people dead.

The Trump campaign initially planned to hold the rally on Friday, which is Juneteenth, a celebration of the end of slavery in the United States, but agreed to move the date to Saturday at the request of Stitt and others.

The Trump campaign didn’t immediately respond to a request for comment on whether they’re considering moving the event to a larger venue or accepting Stitt’s invitation to tour the Greenwood District.

Health officials, including Tulsa County Health Department Director Bruce Dart, have voiced concerns about having so many people in a confined space, noting both the state and Tulsa have seen daily highs in the number of positive cases in recent days.

Oklahoma County Republican Party Chairman David McLain said Monday that the Trump campaign intends to fill every one of the venue’s seats. He said the campaign also intends to provide masks to every person who attends, although he said there won’t be a requirement to wear one.

“I haven’t heard of any policy of mandatory mask wearing at this point,” McLain said, “but that’s fluid and could possibly change.”

Social distancing is still encouraged in Oklahoma but there’s no prohibition on large gatherings.

There have been more than 8,400 confirmed positive cases of COVID-19 and 359 total deaths in Oklahoma from the disease, more than half of which have been residents of nursing homes or long-term care facilities.

While acknowledging the state has seen a recent surge in the number of people testing positive for the coronavirus, Stitt said much of that is due to an increase in testing. He also said only 150 people are currently hospitalized due to COVID-19 and that the state has plenty of hospital capacity.

“We need to continue to be vigilant and continue to take precautions,” Stitt said, “but we also have to learn how to deal with COVID, because it’s in the United States, it’s in Oklahoma, and we can’t let it dictate our lives.”

About the Headline Photo: In this May 6, 2020 file photo Oklahoma Gov. Kevin Stitt speaks during a news conference in Oklahoma City. So many people have expressed an interest in attending President Donald Trump’s rally Saturday in Tulsa, that Stitt said he’s asked the campaign to consider a larger, outdoor venue to accommodate them. Stitt said Monday, June 15, 2020 after talking with Trump and Vice President Mike Pence that nearly one million people have requested tickets to the event. Some Trump supporters have already started waiting in line outside the 19,000-seat BOK Center in downtown Tulsa. (AP Photo/Sue Ogrocki, file)