TULSA, Oklahoma – At his first event in months, President Trump delivered a high-energy speech to an enthusiastic crowd of supporters in Tulsa Saturday night that lasted nearly two hours.

The backdrop of racial tensions and rhetoric about the spread of COVID-19 may have dampened attendance, but not the spirits of Trump supporters.

Attendees started entering through the limited number of openings in the no-scale fencing a few blocks outside the perimeter of the BOK Center before noon Saturday.

As a first order of business, every rally-goer was given a disposable face mask that they had to put on before having a temperature screening.

Virtually everyone then removed their facemasks before proceeding through the security bag-check and magnetometer.

Once inside the secure area, attendees were offered free bottles of hand sanitizer and a seemingly endless supply of bottled water was available.

Rally-goers were then entertained and getting primed for the President’s appearance hours before the official start of the rally, even as they stood in the near 90-degree heat.

By late afternoon, the crowd began steadily streaming into the BOK Center, such that the outside stage area had all but been vacated.  With a smaller than anticipated crowd, President Trump’s appearance to the overflow outdoor crowd prior to the start of the indoor rally was eliminated from the schedule.

Preceding President Trump was, among others, Kimberly Guilfoyle, Diamond and Silk, Laura and Eric Trump and Vice President Mike Pence.

Diamond and Silk told attendees they should vote RED in the upcoming election:  Remove Every Democrat.

Lara Trump encouraged that, like 2016, the polls are wrong again.

About Joe Biden, Lara said you can’t get any swampier and that for being in politics nearly five decades, he has almost nothing to show for it.

She also said one thing to remember is that no one ever tries to stop a loser, only a winner.

Lara Trump concluded by saying she didn’t come empty-handed, as her husband Eric came to the stage to a roar from the crowd.

Eric immediately called out the dishonest media, saying they won’t give his father a chance.

He expressed excitement about the upcoming election season against presumptive Democratic nominee Joe Biden who has been in the basement for 79 days.

“I can’t wait for the first debate.  It will be a bloodbath.”

Vice President Mike Pence said he was there for one reason, “America needs four more years of Donald Trump,” adding, “and the road to victory starts right here.”

He stands with Donald Trump, who stands up for America, American workers, faith, the American family, the American flag, law and order, justice for all and against the radical left. 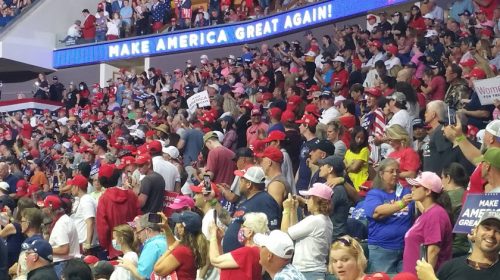 “The choice couldn’t more clear,” said Pence before going into a comparison of how President Trump has handled and how the Democrats would handle issues such as taxes, regulations and China.

While Joe Biden has just been endorsed by Planned Parenthood, Pence said he couldn’t be more proud to stand with a President who stands for the right to life.

“It is the greatest honor of my life to be your Vice President,” said Pence.  As he has traveled around the country he said he has found that “America is a freedom loving nation and America is a nation of faith.”

And, in the wake of the coronavirus, “freedom we were willing to set aside for the health of our neighbors.

He called President Donald J. Trump “the real deal,” who never quits, never backs down and never stops fighting for the American people.

“Now it’s time for us to fight for him,” concluded the Vice President.

Trump began by saying the campaign has begun and thanking the attendees for being warriors in light of the fake news saying don’t come to the rally and “some very bad people outside doing very bad things.”

In his typical fashion, President Trump meandered over a variety of subjects and accomplishments.

Topics included the appointment of 300 federal judges by the end of his first term, improvements at the VA, the border wall, the largest tax cuts in history, more cuts to regulation than anyone in history, the plague he calls the Chinese virus, as well as the recent riots and looting in Democrat cities. 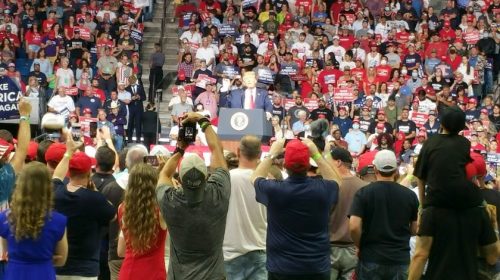 He admittedly went long on the story relative to his cautious walk down a ramp at the graduation ceremony of 1,106 West Point cadets to demonstrate how bad the fake news is.

Understanding his audience, Trump sets the stage for his supporters so that they can respond with familiar chants of “Drain that swamp,” “Four more years,” and plenty of boos for the ill-humored media he regularly calls out and gestures toward.

The President took a few minutes to acknowledge VIPs in attendance, including Oklahoma’s two U.S. Senators Jim Inhofe and James Lankford and several others, including Tennessee Congressman from the 8th District David Kustoff.

As to the real point of the rally, President Trump had plenty to say about his Democratic opponent Joe Biden.

“The choice in 2020 is very simple.  Do you want to bow to the left wing radicals or stand proud as Americans?”

Joe Biden’s 40 years, said Trump, can be summed up as “calamity and failures.”

“He’s complained about it, but he never did anything about it.  He will let you down, that’s been his history.  Biden is always on the wrong side of history.”

Calling him a “shameless hypocrite,” Trump said, “Americans should not take lectures on racial justice from Sleepy Joe.”

As he wrapped up, President Trump took a more positive and upbeat tone.

“We believe in our national motto that will never change, ‘In God we trust,’” he said in unison with his supporters.

“The best is yet to come,” said President Trump.

Laura Baigert is a senior reporter at The Tennessee Star.
Photo “Trump Rally in Tulsa” by Dan Scavino.