Just as the infamous Dred Scott case in 1857 would have extended slavery throughout America, so Thursday’s decision in Department of Homeland Security v. Regents of the University of California threatens to make the machinations of bureaucratic government supreme and unrepealable.

Chief Justice John Roberts’ 5-4 court opinion strengthens the grip of the administrative state – the interlocking network of bureaucracy and political correctness – over the democratically elected branches that are supposed to make us a nation of self-governing citizens.

The Supreme Court, in a seeming conspiracy with lower federal courts, has tilted the table against the elected president and his appointees in favor of bureaucratic governance.

As dissenting Justice Alito pointed out, “the Federal Judiciary, without holding that [the Deferred Action for Childhood Arrivals program] cannot be rescinded, has prevented that from occurring during an entire Presidential term. Our constitutional system is not supposed to work that way.” The judiciary, far from clarifying and drawing bright lines, has effectively become part of the bureaucracy.

Admitting that the equal protection or due process rights  of the children of illegal residents – a.k.a. “the dreamers” – were never in jeopardy, Roberts nevertheless concluded that the Trump Administration’s repeals of unlawful Obama Administration actions are illegal because the appropriate provisions of the Administrative Procedures Act were not followed. In his dissent, Justice Clarence Thomas (joined by Justices Samuel Alito and Neil Gorsuch) noted that as a result of this ruling, the Department of Homeland Security “is not only permitted, but required, to continue administering unlawful programs that it inherited from a previous administration.” 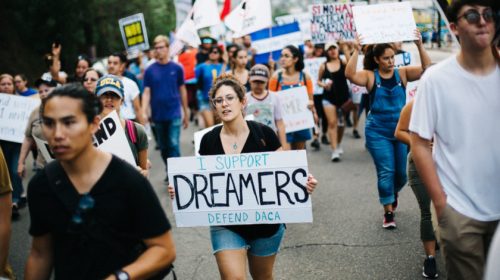 Despite the illegality of DACA and other policies, which were never laws to begin with, there remains the question of how we are to be free of arbitrary and capricious bureaucratic edicts and decrees.

The American people must stand in a long line and wait years. Fill out the proper forms. Perfectly. Even though the previous administration ran roughshod over the law, you have to follow the right procedures to end their illegal actions.

While President Trump blasted the decision for the setback it meant for his immigration policies, the opinion in DHS v. Regents is more portentous for what it illustrates about our ability to change any policy, whether legal or illegal, that an elected government strongly supports. In other words, as Thomas warned, “the ripple effects of the majority’s error will be felt throughout our system of self-government.”

To repeat: the error is the most basic separation of powers error possible: The court confused itself with the Congress and began making policy demands of the executive:

Today’s decision must be recognized for what it is: an effort to avoid a politically controversial but legally correct decision. The Court could have made clear that the solution respondents [the dreamers] seek must come from the Legislative Branch. Instead, the majority has decided to prolong DHS’ initial [illegal, as all concede] overreach by providing a stopgap measure of its own.

We are reminded that Roberts engaged in creative jurisprudence in his infamous majority opinion portraying Obamacare as a tax. And just three days before this case, Justice Gorsuch revised the meaning of “sex” in Title VII of the 1964 Civil Rights Act to mean sexual orientation. But even more apropos is Roberts’ protection of bureaucracy in Department of Commerce v. New York (2019)

In that controversial case, the chief justice, again siding with the court’s liberal wing, tried to depoliticize a case but only ended up protecting the partisans who reside within permanent bureaucracy against the secretary of commerce, who had wanted to add a citizenship question to the Census. Roberts claimed this was “pretextual,” but that is deceptive. As a dissenting Justice Thomas observed, “the Court’s decision enables partisans to use the courts to harangue executive officers through depositions, discovery, delay, and distraction.” 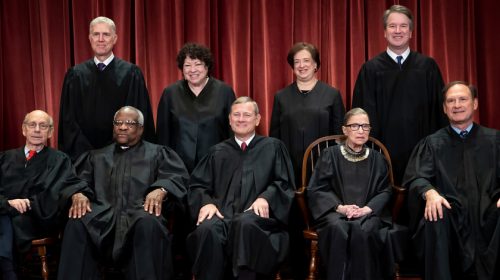 By departing “from traditional principles of administrative law,” the court’s decision, Thomas protests, could even implicate separation-of-powers concerns insofar as it enables “judicial interference with the enforcement of the laws” – as it certainly has with DACA. In both the Census and the DACA cases, Roberts seems to use administrative law arguments as a means of protecting illegal immigrants from the Trump Administration’s policies.

In the DACA case, Justice Thomas notes “perverse incentives,” with a hint to the Trump Administration going forward:

Under the auspices of today’s decision, administrations can bind their successors by unlawfully adopting significant legal changes through Executive Branch agency memoranda. Even if the agency lacked authority to effectuate the changes, the changes cannot be undone by the same agency in a successor administration unless the successor provides sufficient policy justifications to the satisfaction of this Court. In other words, the majority erroneously holds that the agency is not only permitted, but required, to continue administering unlawful programs that it inherited from a previous administration.

The most penetrating critic of the administrative state, John Marini, had warned in 1988 against conservatives’ relying on the Supreme Court in their battles with this leviathan. The administrative state has great intellectual suppleness and the arrogance bred of a self-satisfied sense of moral superiority, and judges share a common lineage with it.

Aided by a life-tenured Court, the administrative state may have found its Dred Scott case in DHS v. Regents and thereby the means for making itself the true ruler of America. Whether this will portend a new civil war over whether Americans are subjects or citizens is an open question. For one thing, it isn’t a war unless citizens recognize they are being fired upon.

Ken Masugi, Ph.D., is a senior fellow of the Claremont Institute. He has been a speechwriter for two cabinet members, as well as for Clarence Thomas when he was chairman of the Equal Employment Opportunity Commission.