Is Jane Timken the leader the Ohio State Republican Party needs to help President Donald Trump win re-election when her party seems to be engaged in a civil war?

The stakes are high in the Buckeye State.

Trump and Biden are locked in a dead heat, according to a poll available here by RealClearPolitics.

GOP insiders say the number of Republican-registered voters in the state has fallen from 2.2 million in June 2016 to 1.9 million last month.

Meanwhile, Timken and Gov. Mike DeWine went on a state tour early this year to say how great things are, The Ohio Star reported. They touted the pre-pandemic economy, government spending and children’s programs while ignoring the governor’s red flag laws, his policy to allow dangerous refugees into the state and primary endorsements that the two have drawn heat on.

Since then, DeWine and Timken have not addressed conservatives’ concerns over Ohio Senate President Larry Obhof’s late-night move to kill a vote on a bill to curb Dr. Amy Acton’s unrestrained powers in strangling the economy.

Now, conservative-leaning county parties are showing their displeasure with state leadership by sending strongly worded letters to DeWine. It may be that letters are the only way they can be heard.

Timken reportedly has not spoken to new Medina County Chair Jim Renacci, not only since he assumed his new office but indeed for far longer.

When contacted by The Star about Timken, Renacci said she hasn’t talked to him since January 2019. This despite his having been hand-picked and endorsed by Trump to run for Senate in Ohio in 2018.

Warren County’s party, where Trump won with 66 percent of the vote, is one of those, the Cincinnati Enquirer said.

Ohio’s Republican governor “grossly mishandled” this year’s primary election and has “not reacted appropriately” to the pandemic, the Warren County Republican Party stated in a resolution signed June 22. 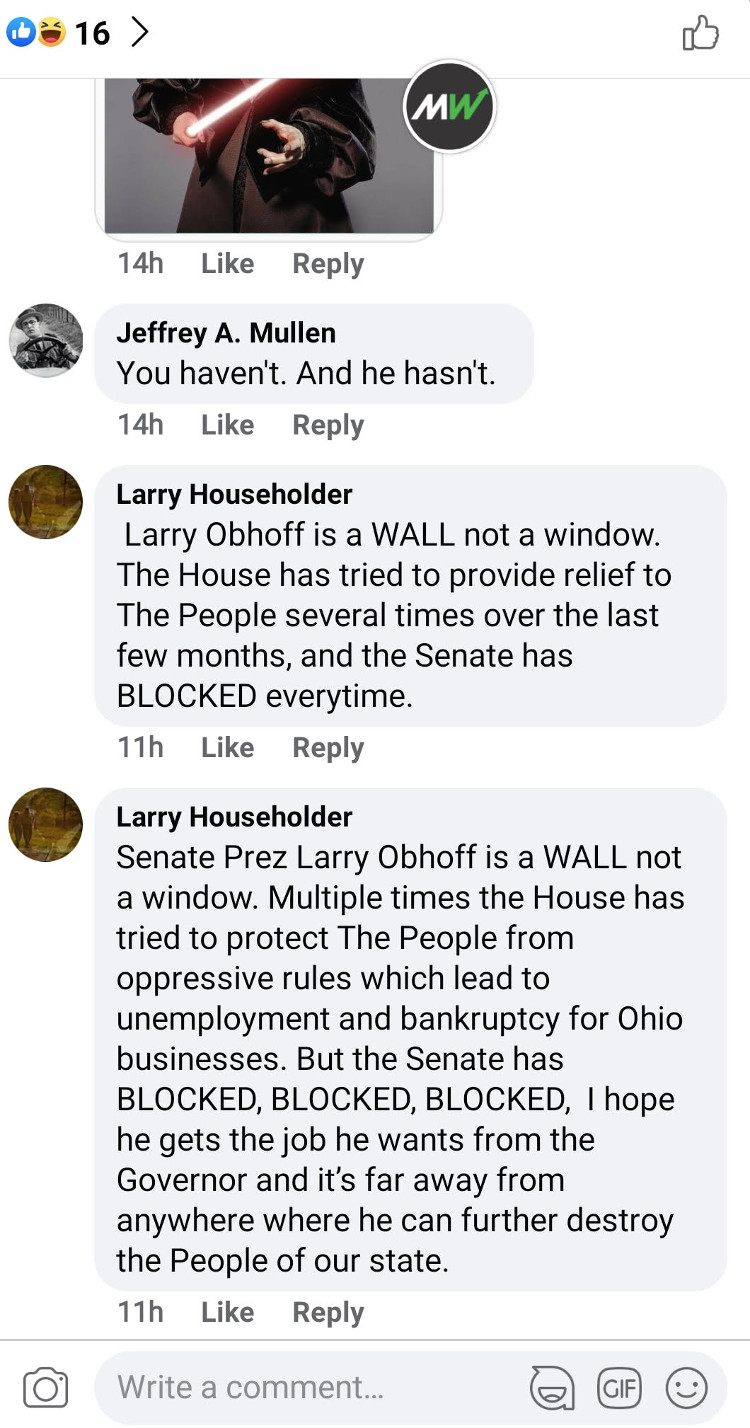 Republicans in six counties in the west-central part of the state sent DeWine a letter expressing similar disdain, The Columbus Dispatch said.

The letter was sent to the governor June 4. “As party leaders in our respective counties, we are telling you that the damage you are doing economically is translating politically.”

Obhof and House Speaker Larry Householder, instead of leading the charge to reopen the economy, have spent their time taking potshots at one another and other Republicans online, such as riffs about anatomical features.

In an undated Facebook thread, Householder said, “Senate Prez Larry Obhoff is a WALL not a window. Multiple times the House has tried to protect The People from oppressive rules which lead to unemployment and bankruptcy for Ohio businesses. But the Senate has BLOCKED, BLOCKED, BLOCKED, I hope he gets the job he wants from the Governor and it’s far away from anywhere where he can further destroy the People of our state.”

The state party appears to be so divided that former Chairman Matt Borges has been running the Right Side PAC to sway Republicans to vote for Biden, The Star said. The Central Committee censured him and stripped him of his “chairman emeritus” status.

The acrimony has claimed one establishment figure.

Fifteen-year Cuyahoga County Republican Party Chairman Rob Frost lost to Lisa Stickan, a longtime Trump supporter who is one of his delegates, The Plain Dealer reported. Frost was not thought to be a major supporter of the president.

This is the latest example of Trump supporters gaining influential positions in the state party, the newspaper said.

While Trump’s campaign does not endorse candidates in party races, campaign senior adviser Bob Paduchik congratulated Stickan in a tweet.

Jason M. Reynolds has more than 20 years’ experience as a journalist at outlets of all sizes.
Photo “Jane Timken” by Jane Timken.

One Thought to “Ohio Republican Party Frays, Leadership Falters As 2020 Election Heats Up”