Representative Jena Powell (R-Arcanum) is a freshman legislator from Ohio’s 80th District with the tenacity of a rookie and the strategic thinking of a veteran. During a Friday afternoon phone call with The Ohio Star, Powell said “everyone can speak on things, but it takes a plan to get there. I am not the kind of person that says ‘open Ohio’ and doesn’t have a plan – you have to have a plan to get to the endpoint.”

Powell laid out a plan she believes will get Ohioans to the endpoint they want – an open Ohio.

Her plan is comprised of seven legislative priorities – initiatives crafted after talks with District 80 business owners, non-profit directors, church leaders and families. “These changes will be good for our district and they also make sense for all of Ohio,” she said.

The 26-year-old has taken an aggressive posture toward the Ohio Department of Health and Governor Mike DeWine with respect to their COVID policies. “Whether you agree with Governor DeWine or not, the governor has taken his hand at legislating and the legislators need to be involved – to get bills into committees and onto the floor to debate and then get them passed on behalf of our constituents,” she said.

Powell continued “I can’t get 99 people to change their minds, but I believe a frank discussion needs to happen in the House on these points.” The freshman representative has encouraged Ohio Speaker of the House Bob Cupp (R- Lima) to call representatives back before their scheduled September date. Once back, Powell believes the following legislative priorities best address the most pressing needs facing Ohioans. 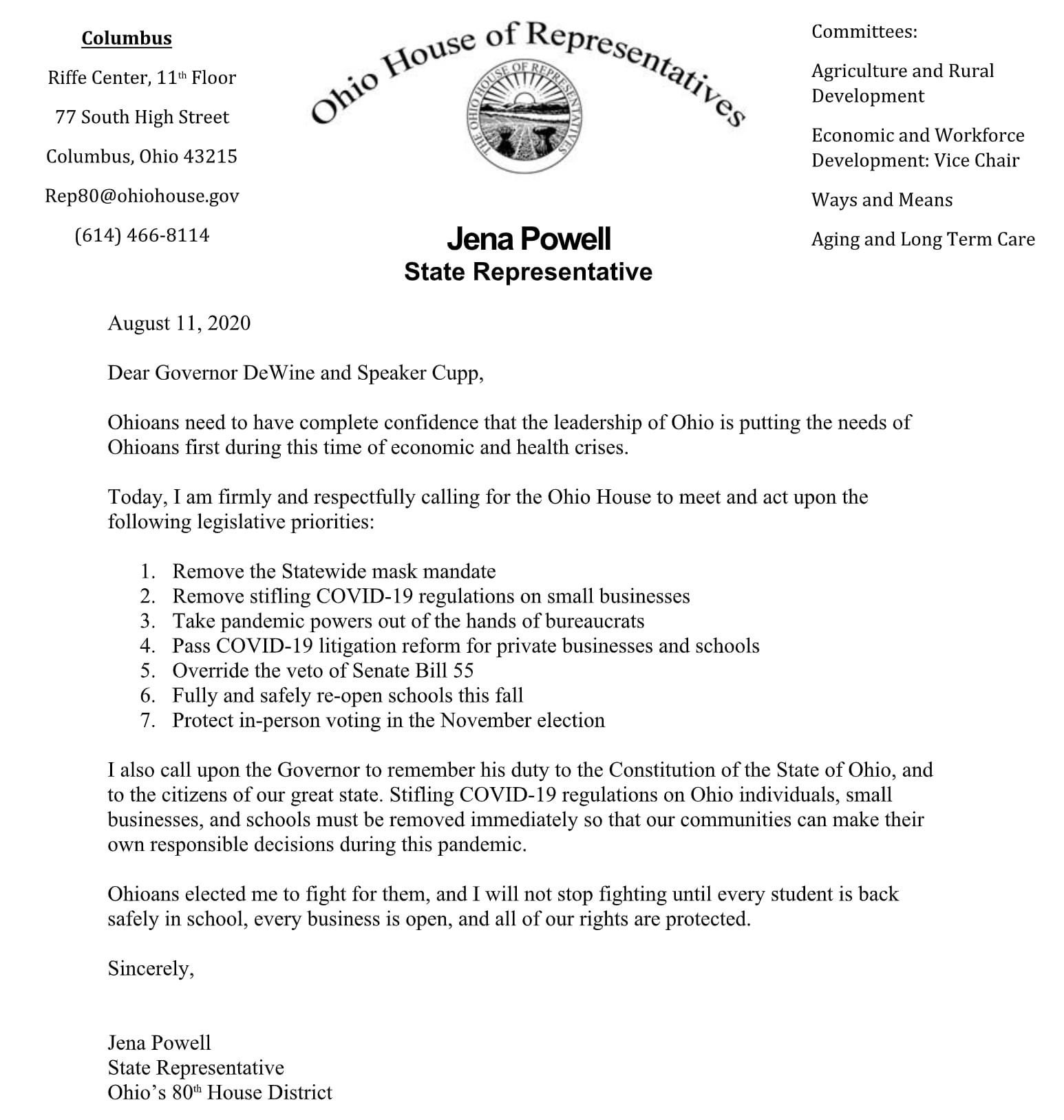 Powell thinks Ohioans are not getting all the information on a myriad topics and masks happen to be one.

“It comes down to personal responsibility – people can exercise their right to make their own choices. They will make good choices.” Powell said. “I will be very clear, I believe we must care for our most vulnerable – I love my grandparents. I also believe we can do that on a local level without the administration stepping in.” 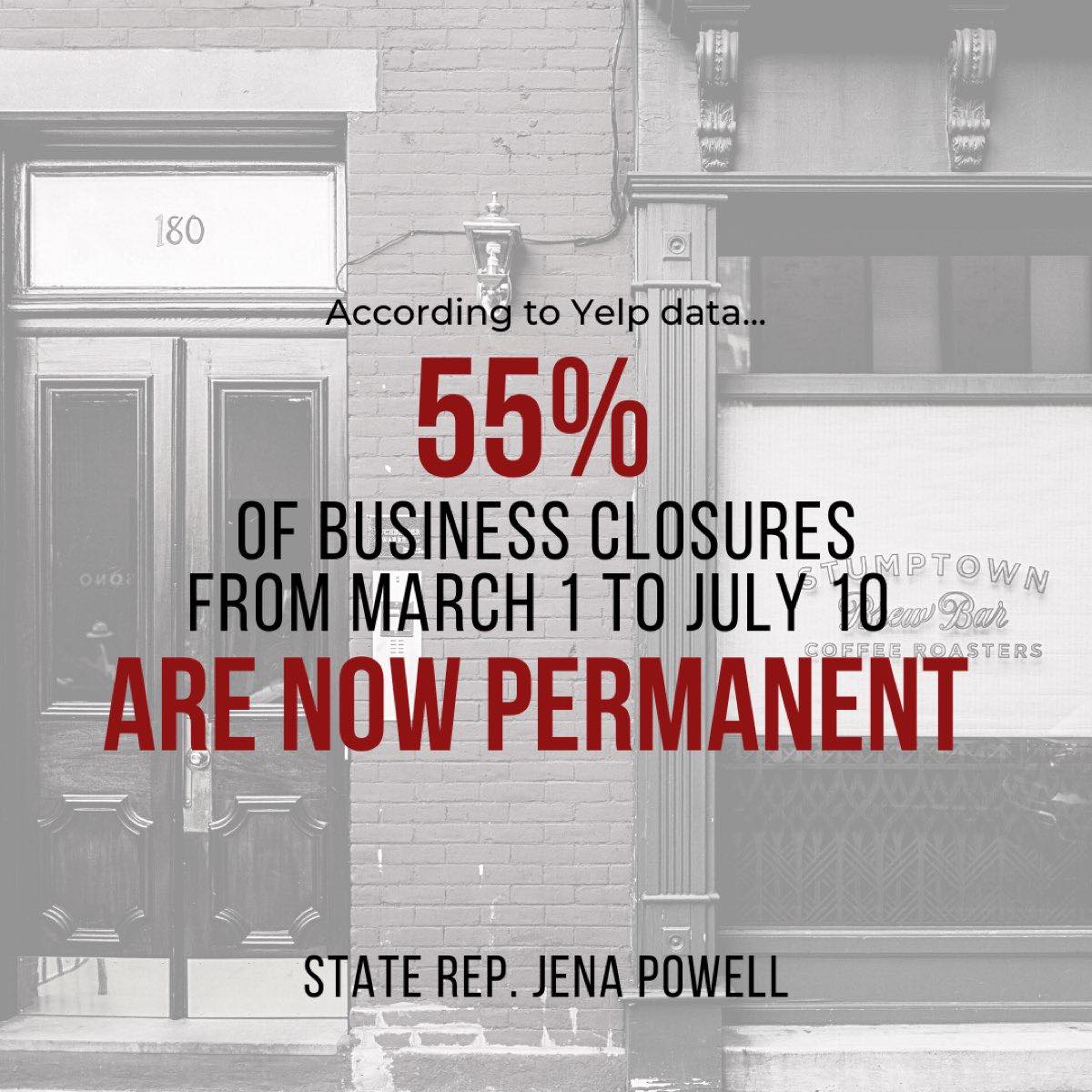 “The heart of our communities and the state is small businesses – the losses are astronomical and these are not short-term problems, they are long-term sufferings,” Powell said. She also stressed that businesses need relief from anxiety stemming from the threat that the government is going to step-in again and pull the carpet out from under their feet.

Take pandemic powers out of the hands of bureaucrats

“The Ohio Revised Code (ORC) needs to be changed to put a time limit on the emergency authority – legislators need to draft and pass a law that has a time limit on pandemic powers,” the representative said.

What started out as 14 days to slow the spread has turned into 165 days of mounting regulations with consequences much broader than COVID health-related issues.

“Messaging from the governor and department of health has totally changed since March. Then it was about making sure our hospitals didn’t get overloaded, but we don’t even hear about that today.  Now, the governor says we must kill the virus. We are not going to kill it and the community needs to understand this – we need to make sure we can live with it around us,” she said.

There is a lot at stake. The toughest fallout from the 2008 financial crisis was the increase in suicides, which studies uncovered were caused by job losses.

According to a Kaiser Family Foundation poll, 45% of adults have reported that COVID has negatively impacted their mental health. Consequently,halting that trajectory requires giving adults free rein to operate their businesses without heavy restrictions that stack the deck against survival.

A University of Wisconsin-Madison study found “approximately 68 percent of the 3,243 student-athletes surveyed reported feelings of anxiety and depression at levels that would typically require medical intervention.”

Getting back to school and work are critical for our overall health and wellness and it is essential to remove legal liabilities for schools and businesses fighting to stay open or reopen.

Senate Bill 55 would eliminate the criminal penalties for violating state COVID orders and lower fines for non-compliance with the mandates.

Powell believes DeWine has overstepped and even if people disagree, it is the people of Ohio who should decide – “this bill gets the legislature involved so debate and policies can happen to create laws that allow the people across the state to weigh in, instead of one person representing all 11.7 million Ohioans.”

CDC Director Robert Redfield has repeatedly stated the greatest risk posed by COVID to kids isn’t the virus, rather its policies that are causing them to battle depression, substance abuse and suicides. Redfield also said that there is no evidence to support the idea kids are transmitting the virus to teachers.

“Kids being in school is huge. I talked with one superintendent who said that at the end of last year 20% of kids never logged in to start online learning,” Powell said. “We already have choices like charter schools and private schools – additional choices need to be available. Some families may be OK with online learning but other families may need the bricks-and-mortar location and they should have the option.”

Having a choice is a resonant theme for Powell who said “Secretary of State LaRose already said it is safe to vote in person. People can opt to go vote the day of the election – but if someone isn’t comfortable that person can vote absentee or vote early.”

When asked if DeWine and Cupp have either responded or reacted to her open letter and legislative priorities, Powell said “the administration is aware of where I stand. We’ll continue making sure they hear the voice of my district. From the beginning it was clear, the governor didn’t care what legislators had to say – regardless, I will continue to do my job even though he feels how he feels.”

Regarding the speaker, Powell said “Speaker Cupp and I have been in discussion. I said ‘here’s what my district is seeing and what’s going on.’ He got my open letter and understands my legislative priorities…now we need to see action.”

Powell was adamant that not everyone in the legislature will agree but the important matter is being in the game – being permitted to play the role legislators are elected to fulfill.

“I’ve asked supporters of the mandates and the ongoing state of emergency ‘how long can the governor do it?’  ‘How long can he use the ORC to put orders on the entire state?’  ‘How is he doing that from his position?’ and I don’t get answers. But these are questions we should all be asking,” Powell said, and then she continued “these are the conversations legislators should be having and debating.”

The most frustrating aspect of the State of Ohio’s response to COVID is the lack of full disclosure, according to Powell.

One Thought to “Ohio Representative Jena Powell: ‘Ohioans Deserve Better Than They Are Getting Now’”