It is the latest in a growing trend with media to downplay or dismiss child sex-trafficking awareness events as covers for other, darker political intentions. QAnon is a wide-ranging conspiracy theory, part of which says President Trump is secretly battling powerful and wealthy Satan-worshipping pedophiles. 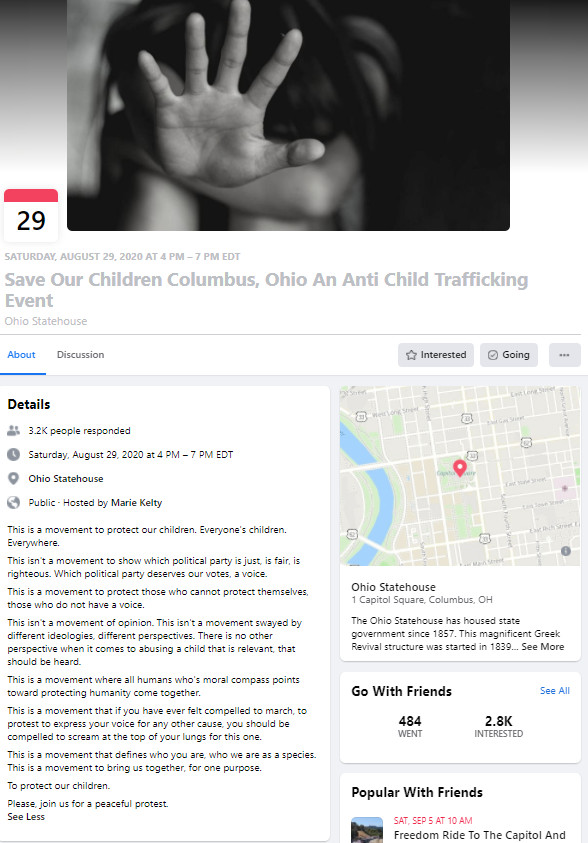 The article focuses itself on associating “Save the Children” with QAnon and its related conspiracies, such as Pizzagate and the recent Wayfair controversy. It does not mention any of the child sex trafficking arrests made throughout the country this past week, or the possibility that protestors attended the event for those reasons. Just last Thursday, Operation Safety Net recovered 25 trafficked children in the Mansfield, Cleveland, East Cleveland, Akron, Euclid, Willoughby, and Miami areas.

The event’s organizer, Marie Kelty, stated in her interview with The Columbus Dispatch that it was “not a Qanon event,” though she acknowledged that the conspiracy theory did inspire a reinvigorated focus for many on child sex trafficking.

The article argues that the event’s attendees mainly support, as one quoted individual put it, “dangerous, destructive, anti-science information.” However, attendees’ main concern appeared to be awareness for Ohio as one of the highest-ranking states for human trafficking. State task force records indicate that trafficking has only increased over the years.

The Columbus Dispatch did not publish follow-up coverage on the nature of the protest. Over 3.2 thousand people responded to the event held on Ohio Statehouse grounds. Despite what the article suggested, there were no reported incidents of violence.

Corinne Murdock is a reporter at The Ohio Star and the Star News Network. Follow her latest on Twitter, or email tips to [email protected].