This is part four in an eight-part series on the Ohio Public Health Advisory System (OPHAS) – the color-coded system designed to give a county-by-county threat assessment of COVID spread in Ohio.

This article will further examine indicator three (of seven) in the OPHAS: the proportion of cases not in congregate settings.

The aged, particularly those with more than two serious existing conditions, are most at risk for suffering the worst – even fatal – effects of COVID.

Yet, for the sake of OPHAS, cases outside congregate settings are supposed to indicate the active community spread of COVID.

Indicator three is triggered if the proportion of cases that are not in a congregate setting goes over 50 percent in at least one of the last 3 weeks.

The upshot of the indicator is that active, growing numbers of COVID infections outside congregate settings can signal a surge, or resurgence, of the virus.

The downside of the indicator is that it associates positive tests with active infections – false-positive tests and hypersensitive diagnostic test kits have been the focus of recent studies and articles calling into question the efficacy of the testing strategy.

Other issues with the indicator: it has no magnitude control, can be triggered with just one positive case and remain triggered for a long time.

With respect to magnitude control, Wayne County provides an example. On September 3, Wayne County moved to a level three, code red, emergency level.  That threat level is supposedly indicative of very high exposure and spread of COVID and residents are supposed to limit activities as much as possible. 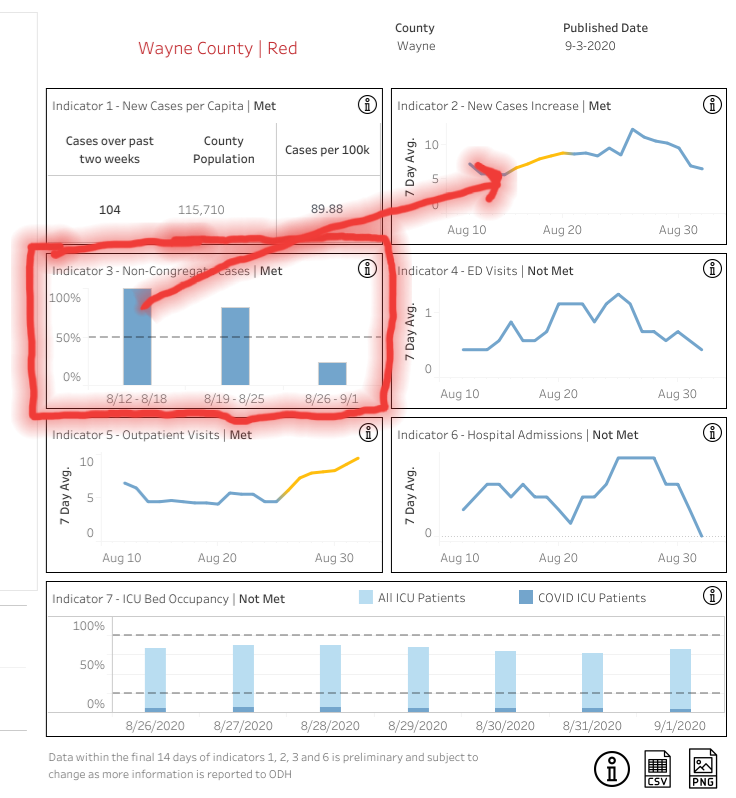 Wayne County escalated to red by triggering four indicators, one of which is indicator three – more than 50 percent of cases derived from non-congregate settings.

A closer look at Wayne County’s OPHAS dashboard shows that indicator three was triggered from August 12 to August 18 when 100 percent of new cases were recorded outside congregate settings. That percentage dropped to 80 percent between August 19 and August 25 but was still above the 50 percent threshold.

What is also possible is for a community to host a pop-up testing site and to accept multiple-more test takers in a week than compared to previous weeks in a community. If the pop-up site produces more positive tests than congregate facilities, then indicator three gets triggered.

All positive cases can be asymptomatic, false positives or residual positives.

Indicator three can remain triggered a long time. Although the indicator dropped to 23 percent for Wayne County between August 26 and September 1 – below the 50 percent threshold – the indicator is still triggered because the measure is retroactive and looks back over three weeks.

This means that this indicator will stay triggered for up to three weeks even if during those three weeks the county returns fewer than 50 percent of positive tests from congregate settings.

Even though Wayne County is in a red-level emergency, a source told The Ohio Star that the county’s main hospital was treating two COVID patients as of September 4.

A leader inside the hospital said that although the state indicated that Wayne County is in red – there have been anecdotal stories of cases in the county but that has not resulted in a large increase in inpatient COVID treatment.

According to the source, the leader went said “if there are localized hot spots it would be nice to officially know where they are so we can be prepared.” All that is known now is that the county is red with no communication from the Governor DeWine or state officials

This is not the first time a county has been coded red without any warning or insight into how to handle any hotspots. The same scenario played out in Hamilton County in July. The percentage of positive cases outside congregate settings in Hamilton were as follows:

July 17 – July 23: 50 percent of cases were outside congregate settings – indicator not triggered

July 24 – July 30: 4 percent of cases were outside congregate settings – indicator not triggered

*However, the weeks the indicator was, technically, not triggered, the county’s OPHAS dashboard counted the indicator as “met” because of the incident between July 10 to July 16. This was one additional factor keeping Hamilton County in the red at a time when schools were determining back-to-school plans.

OPHAS system is supposed to be an early warning indicator of COVID spread designed to empower county leaders, businesses and the community-at-large in each of Ohio’s 88 counties.

The signature feature of the system is the color-coded map that assigns a threat level color to each county based on how many COVID-related indicators the county triggers: 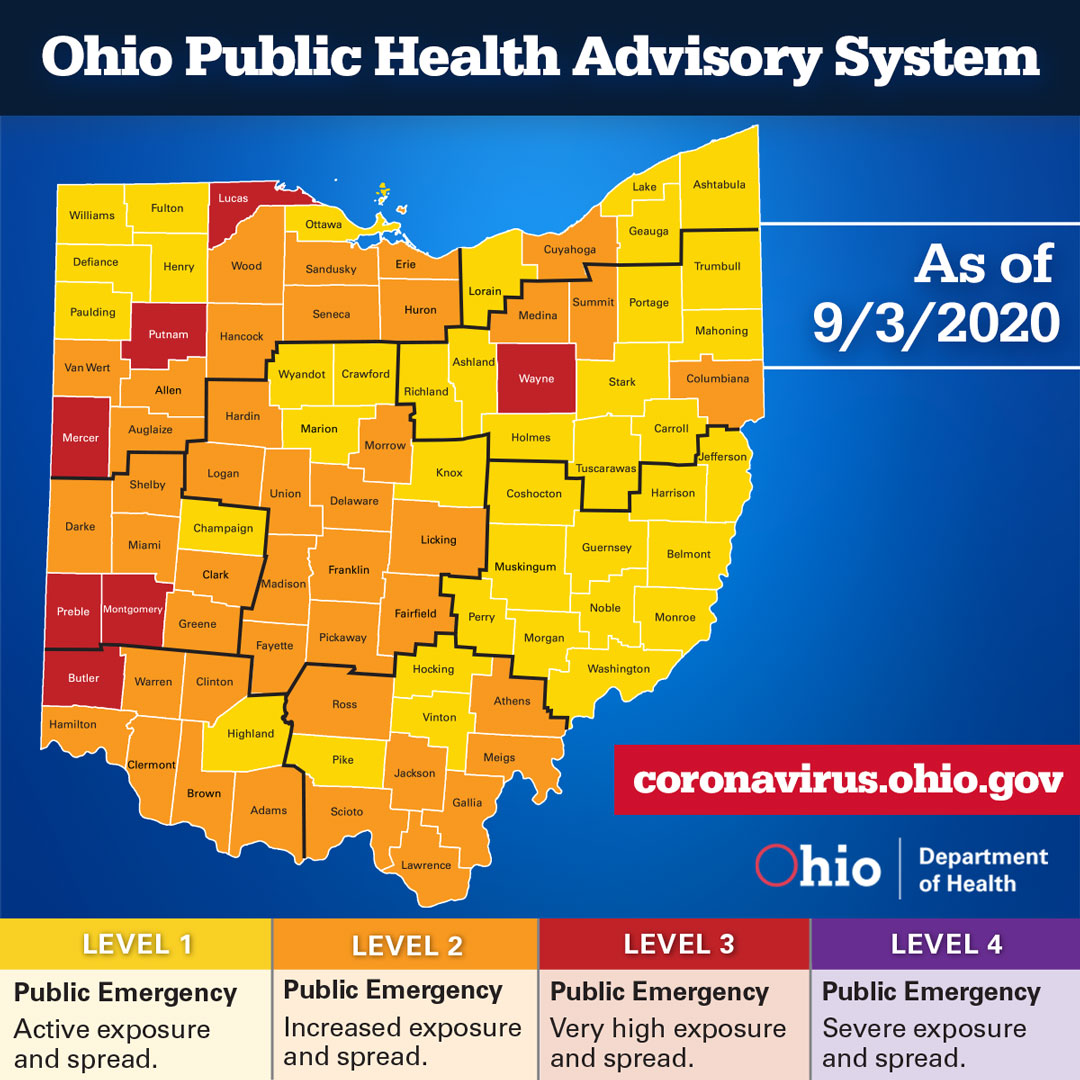 There are seven total indicators, three of which relate to testing and positive cases.

The higher the threat level, the more restrictions can be placed on everyday work, school, and living situations.

OPHAS was referenced by the Ohio Education Association (OEA) when the association stated: “[g]iven the dangers posed by the spread of COVID-19, however, OEA believes that reopening for in-person instruction prematurely poses unacceptable risks to the lives and health of students, adults who work in schools, and the people they care for” in a July 28 position statement on COVID.

This statement came on the heels of CDC Director Robert Redfield’s comments during a press conference that kids are not at serious risk from COVID and there is no data to support they continue the transmission cycle to teachers.

The statement continued “Under Ohio’s warning system [OPHAS], OEA believes that any school or campus building located in a county designated as Level 4 (purple) or Level 3 (red) must remain closed to in-person instruction.”

As recently as a September 3, COVID press conference DeWine continued to warn that COVID is spreading despite the fact that nearly 40 percent of the state population resides in yellow-coded counties and only seven counties across the entire state are red.

OPHAS indicates what if instead of what is. Previous articles in The Star pointed to the fact that increases in testing coupled with the reality that false results are extremely common, were creating the inaccurate notion that COVID was actively spreading.

During a COVID press conference on September 1, Miami University President Gregory Crawford revealed that over 700 students tested COVID-positive but none had sought hospital care.

Since the advisory system continues to be a guidepost for education and other aspects of life – such as restrictions on bars and restaurants and limited crowds at events – it is troubling that 40 percent of the apparatus suggestions rely on testing.

On August 6, DeWine tested positive for COVID, only to learn his test result was false after re-testing negative.  On August 22 the National Football League  (NFL) learned that all 77 positive tests were reversed. The New York Times reported that tests are wildly inaccurate and too slow to contain any future COVID spread.