Conservatives are looking at the 2020 elections and make a couple of assumptions. Without any dishonesty in the election process, President Trump will win a historic victory. The second assumption is they Democrats are going to try and steal the election and if they can’t, they will use the chaos from the attempt to tie the President down in his second term.

On September 25, Lanny Davis launched a tweet storm. It was fifteen or more tweets. The first one started out, “Dear Red States; We are leaving. We’ve decided we are leaving. We intend to form our own county and are taking the other blue states with us…that includes Hawaii, Oregon, California, New Mexico, Washington, Minnesota, Wisconsin, Michigan, Illinois, and all of the Northeast.”

The importance of what is said cannot be understated.

Lanny Davis is not someone on Twitter, just trying to get retweets. Lanny Davis is a major player in the Democrat Party. He is hard-wired into the Democrat establishment. He is a thought leader in the party. He uses Twitter to communicate to the masses. He doesn’t just rattle off with some random tweet. 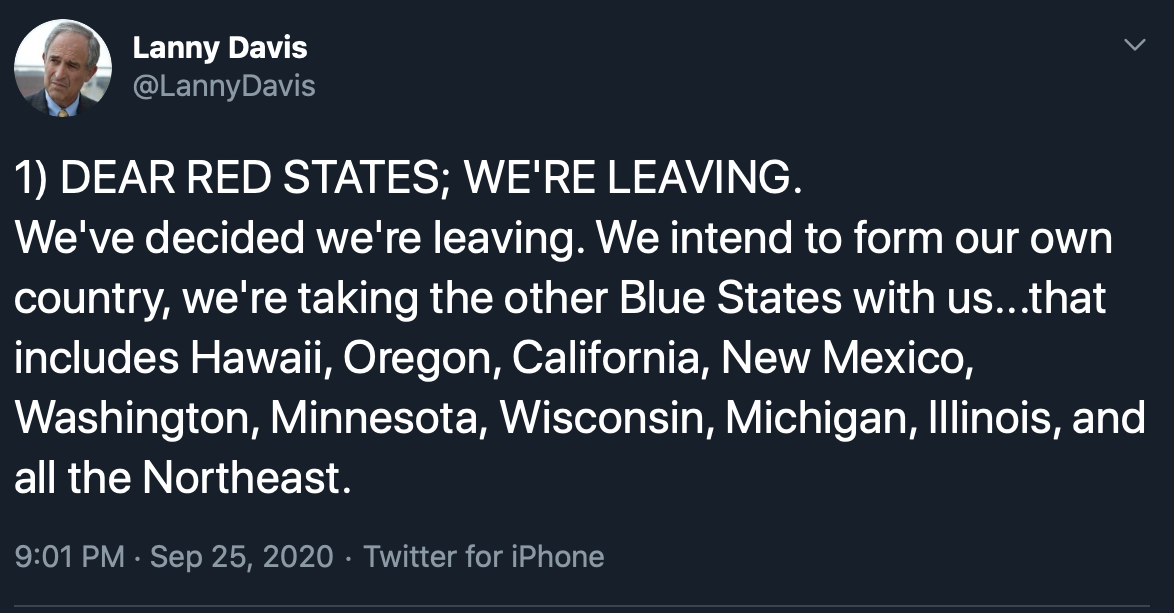 There are two immediate takeaways from this incredible tweet.

First, that tweet is an admission that the Democrat leadership does not believe Biden can steal, much less win the election.

But second, it reveals something the Democrat leaders are thinking about.

They are thinking about splitting the country after President Trump wins a second term.

The so-called “Transition Integrity Project” met in early September to wargame out the possible results of an election. The players were Democrats and Never Trump “Republicans.” The results were fed to the Washington Post, which dutifully repeated them. As a part of one of the scenarios, the Biden team called for the West Coast states to secede and form a nation called Cascadia.

The Democrats recruited for the wargaming included major Democrat figures, such as John Podesta, Donna Brazile, and Jennifer Granholm. These are not minor players in the Democrat Party. Like Lanny Davis, these are major players.

This idea of secession is something that has been discussed at the highest levels of the Democrat Party. Indeed, party leaders have told Biden that under no circumstances should he concede the election.

This is arguably the nuclear option for the Democrats, but as crazy as they have become, it is possible.

The last time states tried to secede we had a bloody civil war. Would we have another civil war?

Or would Donald Trump create the ultimate deal?

We don’t know what will happen.

What is evident is that some very significant people in the Democrat Party are thinking about forming a blue America after this election. This nation may not be one nation, indivisible, much longer.