It seemed only fitting to feature an actual veteran for Veteran’s Day, so I waited to tell Jenny Leigh Miller’s story until that time. Not only that, her newest single is a patriotic, nostalgia-infused tune, “God and Country”, released on November 6th. 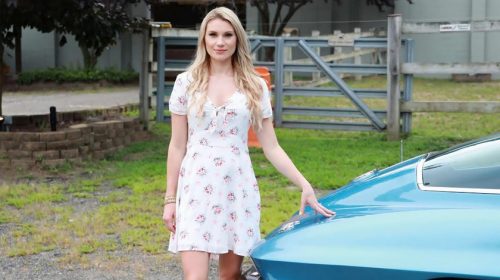 Jenny Leigh Miller was a shy, skinny kid with low self-confidence who never dreamt of being a performer. She recalls once when her mother was playing Sheryl Crow and she inadvertently sang along. Her mom was so impressed, she asked Miller to sing it five times more. She’s like, “Hey, you can sing!”

As a teen, she thought about pursuing music as a career but chickened out because it was a lot of pressure. People were telling her that you really ought to be a singer, but she was too shy. She states, “I still didn’t really believe in myself.”

She surprised everyone by joining the Army at eighteen. Miller recalls, “I’ve always wanted to serve since I was a kid. I really looked up to people in the Military. I thought it was really special when they served.”

She was raised by blue-collar parents to understand American History and the Constitution. Her mom was a teacher and her father was a firefighter. She had family in the military and she knew it was the path she wanted to take.

How Miller got back to music was that when she overseas, the Army Intelligence Sergeant started playing the guitar for the first time in between missions. “I picked it up and learned three chords and people would request songs.” She became her unit’s entertainment.

After becoming so popular among the soldiers, she finally decided to pursue singing as a career.

Even though Miller was from New England, a guy noticed she had sort of a twang and he recommended that she pursue country music. She exclaimed, “I just loved what country stood for, everything it’s about, the values.”

After the military, Miller went to college. After college, she started doing shows and working on an album. She recorded some music in Nashville, but when COVID hit and touring became impossible, she moved back to Connecticut.

Miller made her debut in the country scene in 2019 with the single “Driving With The Top Down.” The New Englander has since performed at Jamfest in Hawkinsville, GA, Sail Fest, and Boston Green Fest. Committed to fellow veterans as a priority, she made a guest appearance at the Yellow Ribbon Fund in Knoxville, TN, and at the Nashville VA Medical Center. Miller made her musical debut on WSM-AM Radio in November 2019.

Besides “God and Country,” and “Driving with the Top Down” Miller has previously released two other singles which she penned, “American Heart,” and “Love Endures” which were recorded in Nashville.

Since she cannot tour now, Miller has been writing music. She discovered a country artist in the UK, Danny McMahon, and they will be releasing a single in the spring.

She is married, has four golden retrievers, and has a “9 to 5” job while she is waiting for the world to open back up. She states, “Some [aspiring artists’] parents are so rich that they can afford [to pursue music full-time]. Good for them. I don’t have that lifestyle.”

Naturally, a lot of her followers on Instagram are military. But with lyrics like Freedom paid by the selfless and the brave, “American Heart” garnered the attention of the police force.

With her latest single, “God and Country,” and words like I broke my daddy’s heart/When I went to war/His little girl was strong/But this is not what he asked for/And I’m nothing compared to those who died/Those who gave all, who gave their lives, Miller is sure to amass even more followers with her heartfelt, patriotic anthem. Veterans and their families are sure to become fans as well.

In music, country music to be precise, Jenny Leigh Miller has found the vehicle that transported a shy, self-conscience little girl into a woman who has a message to share. The words in her strong vocals draw listeners in, making them want to hear more.