COLUMBUS, Ohio – One day following Governor Mike DeWine’s veto of Senate Bill 22 (SB 22) – legislation aimed at rebalancing power by giving the Ohio Legislature oversight of government rules and orders – the Senate and House both took up the bill and both chambers voted to override the veto. 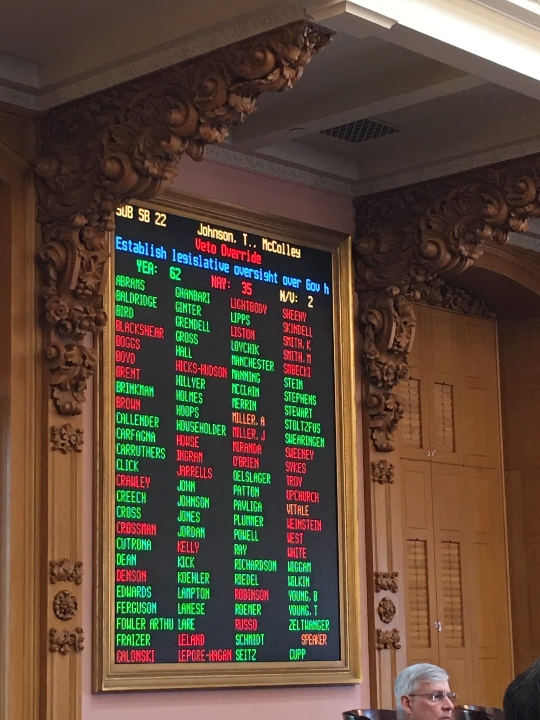 House Majority Floor Leader Bill Seitz (R-Cincinnati) addressed questions about the constitutionality of SB22 in a floor speech Wednesday citing the Joint Commission on Agency Rule Review (JCARR) – a bicameral, bipartisan commission primarily responsible for reviewing rules of Ohio’s 100-plus agencies.  Seitz surmised that if a joint commission can make decisions regarding agency powers, then SB22 can check administrative rules and orders with a concurrent resolution (the law allows the General Assembly to cancel orders by concurrent resolution – which wouldn’t require a governor’s approval).

Seitz acknowleged the bill isn’t perfect, but noted that “changes down the line” that lawmakers could make “shouldn’t obfuscate the reason” SB22 was passed.

House Minority Leader Emilia Sykes (D-Akron) delivered a speech against the bill, claiming that voting to override the veto was akin to “dragging 11.7 million Ohioans” into an argument over whether someone [DeWine] didn’t call you back [legislators] – saying that the General Assembly is out of their lane in matters of public health, as evidenced by non-mask wearing, non-social distance honoring members.

Senator Terry Johnson, SB22 co-sponsor, said during his floor speech in the Senate “it intrigues me when the word science is brought up.”

Johnson, a student of science who has practiced medicine for over 30 years, pointed out that opinion and emotion are not science – and the fact that the votes for and against the bill go along party lines is “politics, not science.”

Johnson, as he did in his first floor speech in favor of the bill before it went to DeWine for a veto, highlighted the 300 Ohioans who testified in favor of the bill when it was in committee.  “These are people who wanted to be heard.”  He continued, “I challenge the media to not do the stories about Terry Johnson” but to look into the 300 proponent testimonies.

“Ask them, ‘What happened to you over the last year?’ ‘What’s your opinion?’ Crickets are what I hear from the media.”

Major elements of SB22 include:

The Ohio Star reached out to Ohio Governor Mike DeWine for comment on the override and to find out if he intends to legally challenge the law.  Through his Press Secretary Dan Tierney, DeWine released the following statement:

It is too early to tell if there will be legal action. Governor DeWine will review the issue with legal counsel.

Governor DeWine, through his letter Monday and his veto message yesterday, made his serious concerns regarding Senate Bill 22 known to the members of the General Assembly and to the public.  In addition, those who provide healthcare and public health services across Ohio, as well as colleges, local officials, and community organizations, also expressed their deep concerns about Senate Bill 22. Governor DeWine remains focused every single day on doing all he can to ensure every Ohioan who wants a COVID vaccine can get one in the coming weeks, which is truly what will help Ohio put this pandemic behind us.