COLUMBUS, Ohio – Former Ohio Department of Health Director Dr. Amy Acton released a statement Tuesday revealing that she will not seek the 2022 Ohio Democratic nomination for the U.S. Senate.

“It has been a tremendous honor to be asked to consider a run for the U.S. Senate. Like many of you, I have a profound reverence for the office, and for those who have answered the calling to public service,” wrote Acton.

She continued, “While I am not entering the race for U.S. Senate, I recognize there is a genuine longing for a fresh approach to leadership that is honest, collaborative, and empowering. Ohioans – do not accept anything less from your elected officials. Our leaders’ words and actions matter.  We must set the bar higher.”

Acton gained national attention as part of the Ohio Executive Branch team – including Governor Mike DeWine and Lt. Governor Jon Husted – that was one of the first in the country to issue emergency orders and a statewide shutdown.

In her statement Acton wrote a postscript in which it appears she is both announcing her retreat from the public spotlight and signaling a return, at some point – “I am humbled by the invitations. I sincerely appreciate your understanding as I take a step back from public life to carefully consider my next chapter, and how, together, we can bring healing and hope to those in need. I look forward to our future conversations and the vital work ahead.”

After her resignation as ODH Director in June, Governor DeWine created a special position for Acton as his Health Director amidst a state hiring freeze, authorizing her $230,000 salary (before benefits).

Acton kept that job for only a couple months, stepping down in August to take another specially-created position – Director of Human:Kind – at The Columbus Foundation.

Acton quit the Columbus Foundation job in February to consider a run at federal office.

Although Acton garnered support and rose to fame, she also had staunch and ample opposition for casting what turned our to be exponentially incorrect modeling, which led to shutdowns along with draconian measures that cut jobs, canceled medical procedures, isolated aged Ohioans, closed schools, and postponed a primary election.

At one point, during an April 2020 COVID press briefing, Acton said it would be her dream for Ohioans to have immunization passports before being allowed to go about their daily living. “A couple weeks ago the big buzz was having a test that could show you had it and in some countries they’re looking at certificates to say that and that you are immune and then, therefore, kind of [be] able to go about your business – and I think that would be a dream thing if we can get to something like that.”

Acton was employed as a professor of global health and worked at The Columbus Foundation raising funds before accepting Mike DeWine’s appointment to the ODH.

Had she decided to run, Acton would have been supported by at least one political fund created to contribute to campaigns of candidates with science backgrounds.

Acton’s full statement can be read below. 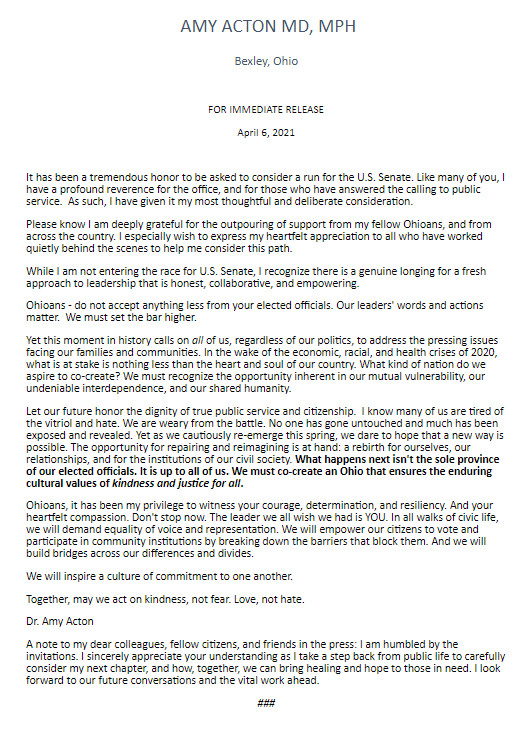 Jack Windsor is Statehouse Reporter at The Ohio Star. Windsor is also an independent investigative reporter. Follow Jack on Twitter. Email tips at your event at [email protected]

One Thought to “BREAKING: Former ODH Director Acton Will Not Run for U.S. Senate in 2022”