COLUMBUS, Ohio – Last week a Republican primary candidate for the 2022 Ohio gubernatorial race said that his vote in the 2020 Presidential Election was not reflected in his voter history on the Franklin County Board of Elections (FCBOE) website.

Joe Blystone, a Canal Winchester rancher and first-time political candidate, requested FCBOE investigate the matter.  FCBOE later determined that Blystone’s vote was cast but not recorded in his voter history.

An election official attributed the glitch to “human error” during the process where a FCBOE employee went “line by line, page by page and location by location” through the paper signature poll book to assign votes to voters’ histories. 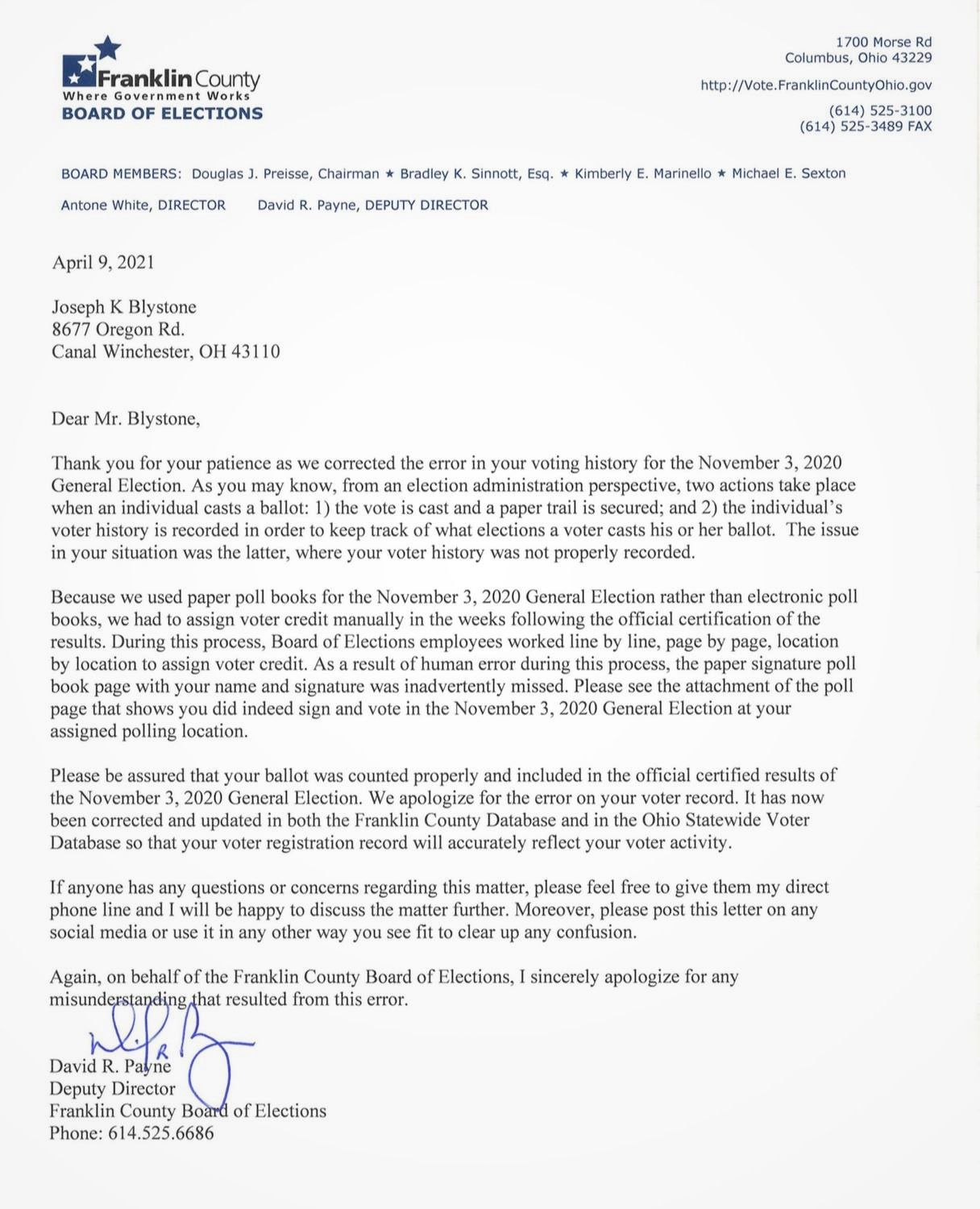 In a letter obtained by The Ohio Star, the Franklin County Board of Elections Deputy Director David Payne wrote to Blystone:

Please be assured that your ballot was counted properly and included in the official certified results of the November 3, 2020 General Election.  We apologize for the error on your voter record. It has now been corrected and updated in both the Franklin County Database and the Ohio Statewide Voter Database so that your voter registration record will accurately reflect your voter activity.

“I’ve been here seven years and this is the first time I recall this happening,” Payne told The Star. “Typically we use electronic polls and have poll books as a backup.”

Hard copy polling books were used on election day when the electronic poll books were inoperable. It was the written record Payne referenced while looking into Blystone’s issue – “It was really clear in looking at the polling book that he, his wife and son all signed it. And their votes were tabulated,” the election official said.

When asked what types of problems incorrect voting histories create, Payne said errors can be problematic for someone running for office when voters are doing their research to see if the candidate has participated in the process.

The Star asked Payne what assurance Franklin County voters have that glitches didn’t keep their votes from being tabulated.

Nonetheless, Joe Blystone told The Star that his team contacted Ohio Secretary of State Frank LaRose earlier this week to schedule a discussion on his matter and the larger issue of what Blystone called “election fraud.”

Talk of election fraud and claims of undue influence started even before November 3. Since then, those who claim elections were illegally influenced reference the $419.5MM that Facebook Founder Mark Zuckerberg, and his wife Priscilla Chan, poured into nonprofit entities – the Center for Technology and Civic Life (CTCL) and  the Center for Election Innovation and Research.  Funds from these entities were distributed to states and counties countrywide to fund election purchases.

Payne told The Star that Franklin County Board of Elections did receive a $979,188 grant from CTCL.  He said those funds were used for:

Ohio Secretary of State Frank LaRose praised payments made by Zuckerberg and Chan.

The Ohio Secretary of State office received over $1MM linked to the couple.  However, if Franklin County is an indication, that number may be small once funds received by counties throughout the state are tallied.

A request was made of LaRose’s office to provide a list of locations that received Zuckerberg money, how much was received and for what it was used.  No response was provided by press time.

2 Thoughts to “Election Board Says Gubernatorial Candidate’s 2020 Presidential Election Vote Cast, but Not Recorded in His History”