The ranking Republican on the House Ways and Means Committee told The Star News Network in an exclusive interview that President Joseph R. Biden Jr.’s proposed hiking of taxes on estates, or the Death Tax, will cost the economy 800,000 jobs from family-owned small businesses, farms and ranches.

“Biden is attacking it different routes,” said Rep. Kevin Brady (R.-Texas), who has been the sworn enemy on federal taxes on estates ever since he was elected to the House 1996.

“One is repealing those exemption limits that we expanded,” he said. “A second is going to dramatically higher tax rates, that’s what Sanders wants to do.” Sen. Bernie Sanders (I-Vt.) is a leading progressive in the Senate. 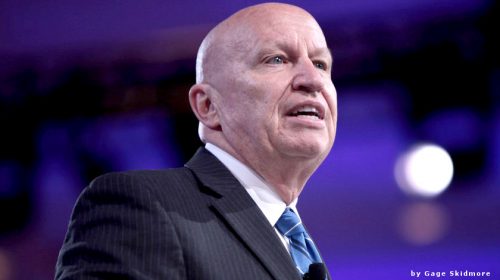 The third way could be the more damaging, he said. “Eliminating stepped-up basis will cost about 800,000 jobs and lands on family-owned farms and businesses. We are right in the middle of another battle on that as we speak.”

A stepped-up basis is a provision in the tax code that allows someone to inherit property and sell it immediately without incurring a capital gains tax because the law updates the value of the property to the market value at the time of the previous owner’s death.

Without the stepped-up basis provision, the daughter would be on the hook for the capital gains tax going back to the original purchase price.

Brady said the farming families and their workers in his district would suffer because they would have to sell assets to raise the cash to pay the tax.

“Well, look what I see here in Texas is, we have family-owned farms and ranches having to be sold off after generations in that family just to pay for that death tax,” he said.

“We had a young woman who worked for us, whose family was from East Texas, she went home to take care of an ailing family member and when they passed away, they had to sell off large parts of their generational property just to pay the bank, pay the tax for this death tax,” said the congressman, who chaired the House’s tax-writing committee from Nov. 5, 2015, until the Democrats took over the lower chamber after the 2018 midterms.

Brady said in addition to the tax itself, there is the expense and aggravation of defending against the tax.

“It has a dramatic effect,” he said. “It is not just a few people who were impacted. In fact, so many of them have to spend lots of money on financial planners and others to try to figure out a way just to keep their family-owned business or farm.”

The Texan said although this fight is going on right now on Capitol Hill, he has yet to have a conversation with Biden about the Death Tax, or any other matter facing the committee.

“On taxes? Zero outreach, other than a call that Secretary Yellen and I, that I asked for with Secretary Yellen initially to talk about taxes and the economy and she reciprocated with the call,” he said.

“As far as any negotiations or serious discussions to find common ground on infrastructure and how to pay for it? The answer is zero,” he said.

“This is my 13th term and this is easily the most partisan White House I’ve ever dealt with,” Brady said.

Brady was instrumental in ensuring that the full repeal of the Death Tax was included in the House version of the 2017 tax bill. This would have been the culmination of one of his paramount legislative priorities.

Despite the bipartisan rhetorical support for repealing the Death Tax in the Senate, Brady ran into serious roadblocks.

“We passed it through the House and it was with very strong support,” Brady said. “We ran into budget problems in the Senate, with no Democrat agreeing to work on tax reform, reconciliation kicked in and that had a $1.5 trillion cap on it.”

Reconciliation is a rule that allows the budgets to pass by a majority vote, exempt from the filibuster’s 60-vote threshold to end debate, but the process does not allow changes to revenue over the set cap.

Brady said he was proud to get what he could in the bill, and at the time he assumed there would be follow-up tax bills to build on the 2017 bill.

“At the end of the day, lowering rates for families, the new 20 percent small business deduction and making U.S. corporate competitive,” he said. “Frankly, as I saw it, there were a number of huge priorities for us, including permanent repeal that simply didn’t get in there.”

Brady said he is also aware that full repeal would have made it harder to bring the tax back, while reducing the tax, but leaving it on the books, makes it easier to adjust the rates higher.

“Full repeal was around $170 billion, what we did on the exemptions cost about $70 billion,” he said.

“At the end of the day, that $100 billion was a big figure in the $1.5 trillion,” he said. “The budget required us to let a pretty huge gain, just not permanent repeal.”

“I would say I haven’t given up on eliminating the death tax permanently,” Brady said.”I don’t know any Republican, frankly, who has.”

Brady remains an advocate for family-owned small businesses, farms and ranches, but he will not get the chance to go back on offense, since he announced April 14 that he will not seek another term in 2022.

Neil W. McCabe is a Washington-based national political reporter for The Tennessee Star and The Star News Network. In addition to the Star Newspaper, he has covered the White House, Capitol Hill and national politics for One America News, Breitbart, Human Events and Townhall. Before coming to Washington, he was a staff reporter for Boston’s Catholic paper, The Pilot, and the editor of two Boston-area community papers, The Somerville News and The Alewife. McCabe is a public affairs NCO in the Army Reserve and he deployed for 15 months to Iraq as a combat historian.