NASHVILLE, Tennessee-  Playing music is as natural to Rhonda Vincent as breathing air. She was born into a musical family from Kirksville, Missouri. The Sally Mountain Show, then later the Bluegrass Festival was hosted by her mom and dad and grandparents and aunts, uncles, cousins, and friends. She picked up the mandolin at eight and the fiddle at twelve and was performing with the family band at festivals on weekends. They also had a TV and radio show that she sang in as a child.

She recalled, “It was a life of music, not a career. It was what we did. We played the nursing home once a month. We had a music party at my grandparents’ house every night. It was not just a musical family; it was a very concentrated life of music.” 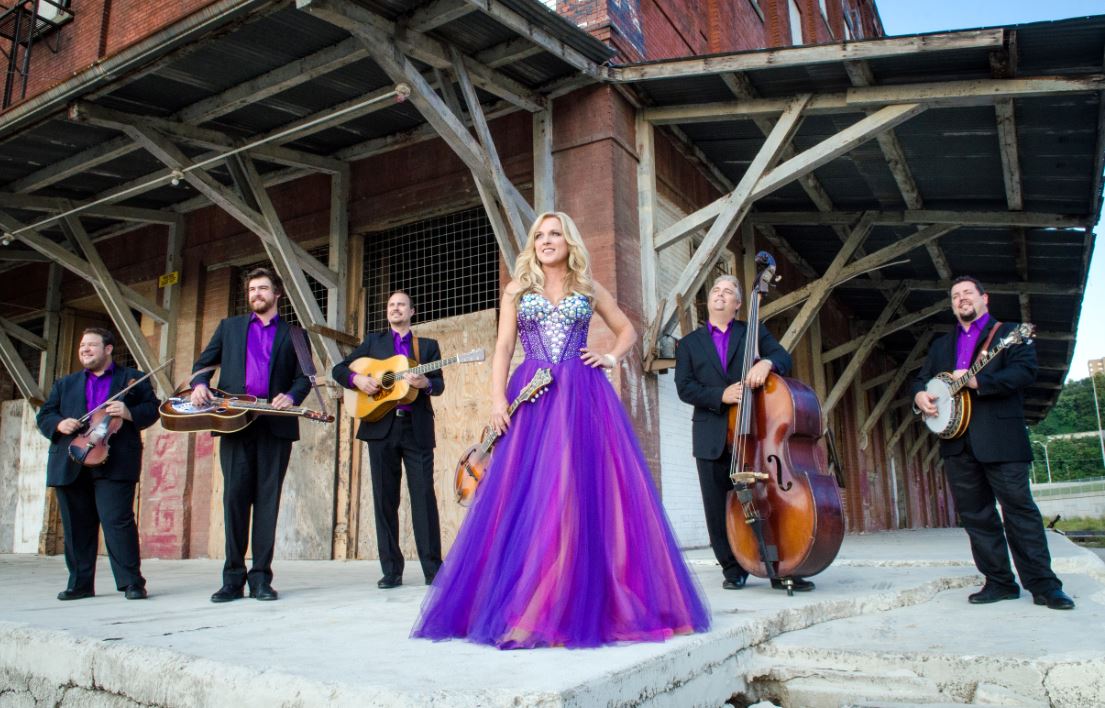 When she was two years old her father, Johnny Lee Vincent was involved in a car accident that broke his neck. Vincent states, “Once he had that car wreck, music became one of the few things he could do since he was paralyzed from the neck down. By the grace of God, he managed to regain some mobility. By playing music together, he could look after us. He knew where we were and it kind of kept us out of trouble.”

Still, with her extensive musical background, she went to college and studied accounting and photography all while still traveling with her family. (Brother Darrin Vincent is part of the award-winning duo, Dailey and Vincent.)

It wasn’t until years later that she put her band together, Rhonda Vincent and the Rage. They played a few festivals and she’d never been happier.

She struck out on her own, singing with the Grand Ole Opry’s Jim Ed Brown.

This eventually led to a deal with Rebel Records. Her work caught the attention of Giant Nashville’s president, James Stroud, who signed Vincent to record two contemporary country albums.

She explained, “That’s where I got to learn about the business, management, and publishing and booking. This was right when Billy Ray Cyrus had ‘Achy Breaky Heart.’ I got to watch all of that in motion.” 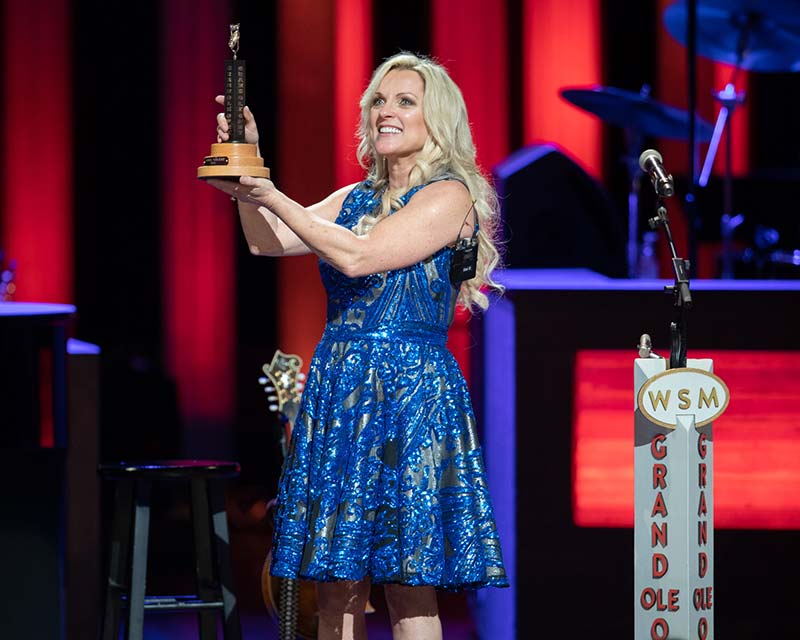 After Giant, she signed with Rounder Records where her passion for traditional bluegrass music flourished. With the release of her debut album “Back Home Again,” The Wall Street Journal crowned Rhonda Vincent the New Queen of Bluegrass.

She’s a multi-award winner, with a Grammy for Best Bluegrass Album (2017), Entertainer of the Year (2001), Song of the Year (2004), and an unprecedented 7 consecutive Female Vocalist of the Year awards from the International Bluegrass Music Association (2000 – 2006).

She confessed, “I’ve had my band for over twenty years now. It was probably five years ago when I said, ‘Oh, so this is what I’m going to do.’ It was so natural. I didn’t think about it being my career. It was my job, my career, and my life.”

In February of 2020, after years of record deals and numerous bluegrass awards, Rhonda Vincent was asked to join the Grand Ole Opry. When I saw her at the Opry myself, I was shocked that she wasn’t already a member.

“The funny part is that some of the Opry Members were talking about making me a member. Several said, ‘We thought she already was.’ They did not realize that I was not a member,” she said.

Because of the pandemic, nearly a year later, Vincent was officially inducted into the Grand Ole Opry on February 6, 2021. The small-town girl from Missouri who had spent countless years creating a career for herself had finally received the ultimate musical validation by becoming an official Opry member.

Dan Rogers, vice president and executive producer of Grand Ole Opry said, “It’s great to have the supremely talented and very patient Rhonda Vincent as an official Opry member. She brings with her countless fans, industry respect, and heartfelt passion for keeping the Opry vibrant and entertaining for generations to come. We look forward to Rhonda spending the rest of her career with us as part of the Opry family.”

On May 28th, Rhonda Vincent released her newest album Music Is What I See. Although this record was slated for an earlier release, due to the events of 2020, she used this time off to focus on every detail, creating the perfect mixture of bluegrass and country. Rhonda Vincent’s high-spirited energy is present with a blend of new tunes, and fresh arrangements of classics such as the first-ever recorded bluegrass version of the classic, “Unchained Melody,” which she recently debuted live at the Grand Ole Opry.

Leading up to the album release, Rhonda Vincent has been featured in People.com, Taste of Country, and Wide Open Country, where each outlet premiered a new single.

The singer’s clear vocals shine on the title track to “Music Is What I See,” It is a beautiful ballad about a blind man playing on Lower Broadway (TN) as a huge crowd gathers. The song is conversely different than the parody song, ”I Ain’t Been Nowhere” sung to the tune of “I’ve Been Everywhere” but talking about the time during the pandemic.

Opry member Jeannie Seely along with songwriters Erin Enderlin and Bobby Tomberlin wrote the heart-wrenching song, “Like I Could” which is the perfect song to showcase Vincent’s traditional country sound. A lone fiddle player beautifully emphasizes the soulful sorrow created by the song’s lyrics and melody.

Rhonda Vincent also covers Porter Wagoner’s “What Ain’t To Be Just Might Happen” which reminds me of the original “Don’t Worry, Be Happy” song.

And for those who crave the traditional bluegrass sound, “I’d Like To Be a Train” showcases some serious banjo pickin’, with an elaborate mandolin melody along with some flawless fiddle playin’ and a fun harmonica riff.

The variety, breadth, and depth of Music Is What I See is unlike any record I have heard in a very long time. It certainly has something for everyone on it. With this new album and a growing tour schedule (including Switzerland in 2022), “The Queen of Bluegrass” is back in full swing!