In a “Fact Checker” article published as “Analysis” this week, The Washington Post referred to Fulton County’s record-keeping of the chain of custody documentation of the absentee ballots deposited into drop boxes during the November 3, 2020, election “shoddy” and “sloppy.”

While the apparent goal of the “Fact Check” was to deliver “Four Pinocchios” to former President Donald Trump for what The Post called “baseless claims about ballot drop boxes in Fulton County, Ga,” it made arguments supporting claims of election irregularities.

The Post introduced the story line by quoting Trump’s statement, praising The Georgia Star News for investigative reporting that led to a Fulton County elections official admitting that “a few forms are missing” and that “some procedural paperwork may have been misplaced,” with regard to the 385 of 1,565 transfer forms Fulton County has failed to provide to The Star News.

Thank you and congratulations to Laura Baigert of the Georgia Star News on the incredible reporting you have done. Keep going! The scam is all unraveling fast.

The Post apparently takes issue with Trump’s use of the word “scam,” but recognized that in the Atlanta area the term “carries weight,” alluding to Secretary of State Brad Raffensperger’s investigation that was launched based on the same report from The Georgia Star News that Trump referenced.

When it comes to Fulton County’s missing chain of custody documents, The Post opines that having only “shoddy record-keeping by local election officials” is not evidence of a scam unraveling in Georgia.

In the first seven paragraphs of “The Facts” section of the story, other than observing that Joe Biden “unexpectedly” won the state of Georgia, The Post largely recapped The Star News reporting on Fulton County’s incomplete response to our open records requests.

The Post then compared The Star News statement on Fulton County’s admission of the missing forms to that of the elections official.

The Georgia Star News said, ‘This is the first time that any election official at either the state or county level from a key battleground state has made an admission of significant error in election procedures for the November 3, 2020 election.’

Was it an admission of significant error? The county official said only that ‘a few forms’ were missing.

The Post then pointed to the Georgia Public Broadcasting (GPB) News story that said they “had gotten ahold of almost all the missing records” within two days after The Star News report.

GPB News, however, has not published any of the records that they say they obtained from Fulton County.  In contrast, The Star News published on June 13 the chain of custody public records provided by Fulton County.

The small portion of the two transfer forms that GPB News writer Stephen Fowler presented in a Tweet revealed another discrepancy in Fulton County’s record keeping.

The transfer forms recorded that 36 ballots were collected from the Metropolitan Library and Cleveland Avenue Library drop boxes on October 11, which actually conflicts with Fulton County’s spreadsheet log which showed 15 absentee ballots collected from those two drop boxes on that day – a discrepancy that over or under states the collection amount by 21 absentee ballots.

The Post erred, however, when it asserted in its conclusion, “Days later, Fulton County provided almost all the records to Georgia Public Broadcasting.”

As of Wednesday evening, Fulton County has failed to produce those missing 385 ballot transfer forms in response to a Georgia Star News Open Records Request submitted on May 17.

Consequently, the critical chain of custody documents for 18,901 absentee ballots cast in Fulton County currently remain unavailable to the public.

As The Post points out, GPB News in their report said they obtained records for all 123 counties that used drop boxes, “countering claims among some pro-Trump media outlets that there are more than 300,000 ballots’ worth of forms ‘missing’ statewide.”

The Star News has continued to report on the status of the open records requests originally submitted to all of Georgia’s 159 counties in December 2020.

The latest update on June 21 was that just 60 of Georgia’s counties have provided absentee ballot drop box transfer form, with state and county officials failing to produce chain of custody documentation for more than 316,000 absentee ballots deposited by voters into drop boxes during the November 3, 2020, election.

The Post calls the publishing of regular updates on the counties that have supplied drop box chain of custody documents by The Star News “keeping up pressure on those that delay” and links to a “fact check.”  A closer look at the linked fact check primarily focuses on comments made by Rep. Elise Stefanik (R-NY) in a statement to the Albany-Times Union on January 6 in which one paragraph The Georgia Star News is named.

Citing an April news release by Raffensperger’s office, The Post presents it as “debunking the implication that something mysterious was taking place besides tardy replies to a publication.”

Then it goes on, referencing the statement by the office, “Of the 123 counties that used drop boxes, ‘120 have confirmed they filled out and retained ballot transfer forms in accordance with Georgia rules,” the statement said. The other three counties, Coffee, Grady and Taylor, were referred for investigation.’”

The specific portion of the Secretary of State’s statement that The Post cited doesn’t just verify that the office only “confirmed” absentee ballot transfer forms in 120 counties – but did not actually obtain or scrutinize them for adherence to the State Election Board Emergency Rule 183-1-14-0.8-.14 or accuracy to the count of actual absentee ballots – but also that three counties violated state rules.

The referral of three counties for investigation gives the impression that there is more there than just “tardy replies” to The Star News open records requests.

The Post doesn’t, however, take issue with the GPB News claim that they have “obtained records for all 123 counties that used drop boxes.”  This, despite Raffensperger’s office saying they only got records from 120 counties and GPB News in its own story quoted the Grady County registrar’s email to the state saying there are no forms because, “I am the only one in my office, and I was the only one who emptied the drop box every day,” and Taylor County’s registrar said she did not keep track and asked “How am I going to be able to do these forms?”

The Post did not elaborate on what claims made by The Georgia Star News, other than the missing transfer forms, they questioned Schaffer about.

Surprisingly, The Post then went on as if they were trying to make a case to substantiate claims of election fraud, particularly in Fulton County.

An Associated Press story was cited and quoted about the state’s hand recount of the November 2020 election results the outcome of which was threefold:  The secretary of state’s website vote total dropped by 766 from when the ballots were first tallied after the election, Biden’s lead dropped from 12,670 to 11,779 and Fulton County’s recount showed 880 fewer votes than the results certified after election night.

While state elections official in Raffensperger’s office, Gabriel Sterling, called Fulton County’s discrepancy “a little worrisome,” he qualified that “it’s a big county that’s had managerial issues” and noted the oft-repeated “the difference wasn’t enough to change the overall outcome of the election.”

Raffensperger, The Post rightly points out, “has been critical of Fulton County’s election management and has suggested several changes.”

This was evidenced by a duo of tweets by Raffensperger on the same day of The Star News story vowing to thoroughly investigate the matter.

“New revelations that Fulton County is unable to produce all ballot drop box transfer documents will be investigated thoroughly, as we have with other counties that failed to follow Georgia rules and regulations regarding drop boxes. This cannot continue,” he wrote; followed by “Restoring confidence in our elections is going to be impossible as long as Fulton County’s elections leadership continues to fail the voters of Fulton County and the voters of Georgia. They need new leadership to step up and take charge.”

New revelations that Fulton County is unable to produce all ballot drop box transfer documents will be investigated thoroughly, as we have with other counties that failed to follow Georgia rules and regulations regarding drop boxes. This cannot continue.

Raffensperger also brought on a non-partisan monitor to observe the November election in Fulton County.

The monitor found, as The Post reported, “’persistent chain of custody issues throughout the entire absentee ballot processing system’ and blamed bad management.”

In fact, the monitor documented “massive election integrity problems” in November, which The Star News reported.

In addition to reporting on the missing chain of custody documents for absentee ballots transferred from drop boxes to the Fulton County registrar, The Star News also reported on issues found with the portion of transfer forms that were received.

The taxpayer-funded GPB News has still provided no evidence that they have received all of the Fulton County absentee ballot drop box chain of custody documents, giving the appearance that media and government are working together to withhold records that the public has the right to see, much less that they have evaluated any documents for compliance with the State Board of Election Emergency Rule or for accuracy against any of Fulton County’s other documentation.

After The Post story cites GPB News’ Stephen Fowler’s story, Fowler Retweeted a separate Washington Post analysis that despite their debunking one third of the U.S. thinks Biden won due to fraud, referencing the same seven-month period that Fulton and numerous other Georgia counties have failed to produce public records for the November 2020 election. 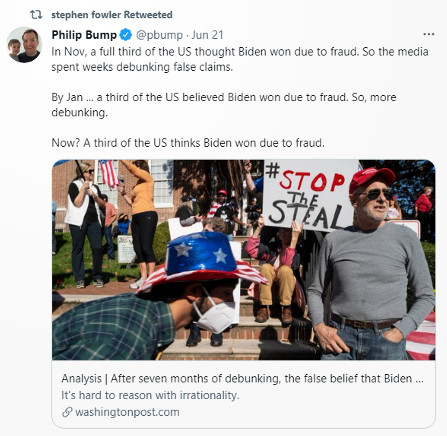 Laura Baigert is a senior reporter at The Star News Network, where she covers stories for The Tennessee Star and The Georgia Star News.
“Washington Post Building” by Dion Hinchcliffe. CC BY-SA 2.0.