The press conference featured three of five central committee reformers and a U.S. Senate candidate who also called for Republican county parties to demand a statewide convention this March to ratify those reforms in the party’s bylaws and force now-optional state conventions to occur ahead of gubernatorial and presidential primary elections.

District 10 central committee member Laura Rosenberger said she and other members have become distrustful of Ohio Republican Party (ORP) Chairman Bob Paduchik after discovery of significant issues in the quality of  accounting practices that suggest fiscal mismanagment of party funds for several years. She also lambasted the late July revelations of major funding of the campaigns of Governor Mike DeWine and Ohio Attorney General Dave Yost.

“ORP Treasurer Dave Johnson, in a recent Ohio Star news article, called me and other central committee members who are concerned about the ORP’s fiscal mismanagement ‘Malcontents,’ ” she said just a few feet from the Governor Mansion’s gates.

“I am a malcontent: I am not satisfied or content with the status quo at the ORP and the long-standing relationship between the ORP and corrupt elected officials and candidates,” she continued. 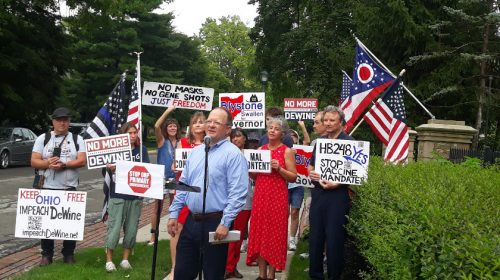 “This is called a dictatorship,” Rosenberger said addressing just two reporters in attendance at the press conference, none from the mainstream media. “For decades, committee members and chairmen have abdicated their fiduciary duty to the party, and today we are seeing the results of that neglect and abuse.”

A call to ban endorsements, for state convention

The timing and location of the press conference was supposed to coincide with a picnic the DeWine campaign had planned for central committee members ahead of an expected Sept. 10 committee meeting that could still  result in state GOP endorsements.

The campaign cancelled the picnic late last week, citing forecasts for the possibility of rain as the reason.

Pukita said the picnic is indicative of corruption.

He said the ORP controls many central committee members through the offer of patronage posts, such as paid gubernatorial appointments to various boards and commissions. These posts also bind grateful members when it comes to primary endorsements, Pukita said.

Pukita, who announced his senatorial candidacy 18 months before Portman announced his retirement earlier this year, said the GOP needs to get rid of endorsing candidates and just allow GOP voters endorse candidates through the primary election.

He said he has found little support for banning endorsements among statewide candidates with whom he has spoken.

“Unfortunately, I have found that most candidates are only against primary rigging endorsements – quietly – when they cannot get them,” he said. “Quietly because they want to be in position to get them next time.”

Pukita said the ORP’s payment of about $870,000 in cash and in-kind expenditures in the first six months of this year to the DeWine Husted for Ohio campaign, as well as $611,800 to the Yost campaign, exemplifies the problem.

“Why? Who authorized this?,” he asked of the late July revelations. “Where are the explanations?”

Rosenberger and Joanne Campbell, the District 22 committee member from Medina in northern Ohio, said the corruption within the party calls for the need of a statewide convention, a forum not used by the Ohio Republican Party in 40 years, even though Ohio law authorizes party conventions. Calling such a gathering would require at least 45 county party committees to approve identical resolutions in support of a convention.

The purpose, Campbell said, would be to review and amend the bylaws, set endorsement policy to supersede current policy, and elect a new chairman.

“We believe Ohio Republicans need to take these measures in order to reform the party because it has proven it will not reform itself,” Campbell said, noting the effort has gained some traction in several counties. “I believe, after today, it’s going to spread like wildfire.”

Brian Ball is a reporter for The Ohio Star and The Star News Network. Send tips to [email protected]
Photo by Brian Ball.

About the Headline Photo:  Mark Pukita, GOP candidate seeking the GOP nomination for the U.S. Senate, speaks at a news conference outside the Ohio Governor’s Mansion about the need for reforming the Ohio Republican Party. Reform supporter Joann Campbell stands behind Pukita on the right while Laura Rosenberger stand behind him on the left.