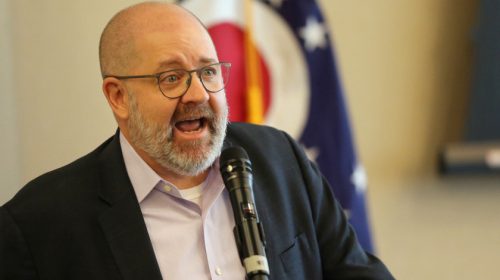 Central Committeeman James S. “Jim” Simon first called for the gallery to be cleared at or around 11:20 a.m. Simon was a loyalist of former chairman Matthew Borges. During the 2016 presidential campaign, when Borges was feuding with candidate Donald J. Trump, Simon gave statements to the media defending Borges and used the hashtag #winwithmatt on his Tweets.

Sitting at his assigned seat in the back, Simon was the most active member countering the reformers, often calling out points of order when they were speaking.

When Paduchik decided to clear the room, he said everyone who was not a committee member, credentialed media, a party staffer, or members of the public there by invitation had to leave the room. 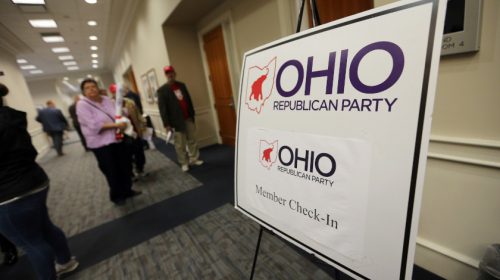 Then, party staffers directed two Delaware County Sheriff‘s deputies to escort people out of the public gallery. This went on for a few minutes, with some people in the gallery telling deputies that they were invited to attend the meeting.

With more than half the Central Committee members now in the hallway outside the room, many grabbing box lunches, and bottled drinks, inside the room, the chairman continued to press people to leave the public gallery.

Paduchik then threatened to adjourn the meeting if the three or four people in the public gallery refused to leave.

Then, in a flash, one member shouted a motion to adjourn, quickly seconded, followed by the chairman calling for a voice vote.

Paduchik: ‘This meeting is adjourned’

As the deputies tried to straighten out with party staffers whom they were supposed to escort out, the chairman stood at the podium and announced: “This meeting is adjourned.”

When word spread into the hallway, committee members were universally shocked that the meeting was over. They started asking each other what was going on, but nobody seemed to know. 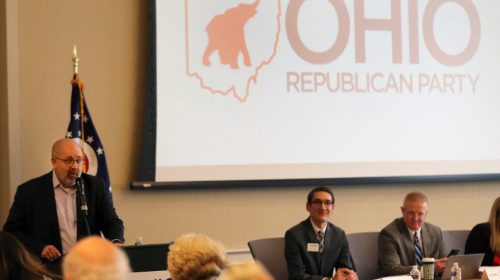 Central Committeeman Mark A. Bainbridge, a business consultant, and advisor, who retired from Ernst & Young as a partner after 36 years with the firm in 2009, said the meeting was disappointing.

“My expectations were not very high, just because of the make-up of the committee,” Bainbridge said.

Former congressman James B. “Jim” Renacci, who is challenging Gov. R. Michael DeWine for the 2022 gubernatorial nomination, said it was his first time attending an ORP Central Committee meeting in many years.

Renacci, the party’s 2018 Senate nominee, said he hopes people can work out their differences. 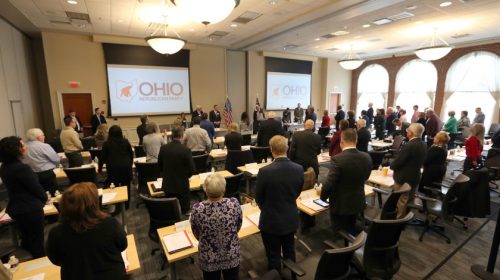 “Whatever the differences are within the party, they need to be reconciled and cleared up, so we have a strong party going into 2022,” he said.

If he is elected governor, Renacci said he would need a strong Republican Party, and that is what he is focused on.

Resolution calling for an audit going back to 2017

Before the committee turned to the resolutions on the agenda, Paduchik told the committee members that he was limiting the speakers to three minutes.

Of the five, only three resolutions were addressed by the committee, and all three were referred to committees.

The first resolution considered was proposed by Central Committeeman Mark A. Bainbridge, which called for an audit going back to the fiscal year that ended in 2017.

Bainbridge said this would be different from the financial review going back to 2017 announced by the party’s executive director Justin Bis. 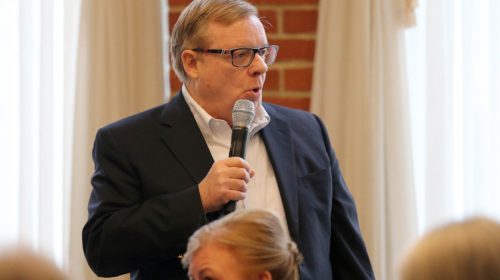 “There’s three levels of test or assurance services that an auditor can provide,” he said. “One is called compilation, the other is a review, and the highest level is an audit. Compilation is just when you come in and put financial statements together. A review is when you come in and do an analytical review of the financials but don’t look at the underlying record. An audit is a complete service, where you’re looking at the details.”

Bainbridge said given the confusion in the books, there needs to be an audit, which includes an examination of documents, such as invoices and receipts.

“That’s why this has to be an audit and can’t be a review,” he said.

Earlier in the meeting, Bainbridge rose to ask Party Treasurer David W. Johnson questions about his report. Still, the treasurer would not entertain his questions: “I don’t think you know what you are talking about.”

Then, to the room, he said: “There isn’t one shred of evidence that there is any money missing from this party.” 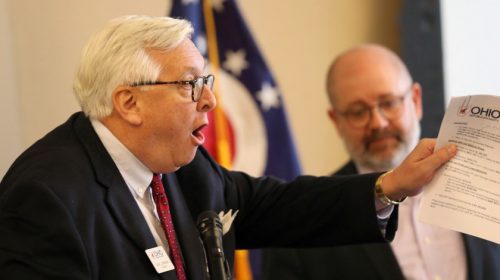 The second resolution considered was proposed by Central Committeewoman Laura Rosenberger, which would have restored members to their original committee assignments from the beginning of their two-year terms.

“I should have never been kicked off my committee,” said Rosenberger, who was on the Audit Subcommittee until Paduchik took her off it in October.

Joe Miller, who was also taken off his committee, stood up to support Rosenberger’s motion, which he said would put the committee assignments back in alignment with the bylaws.

Speaking directly at the Paduchik, Miller said: “Nowhere in the bylaws does it state that you can remove us—that’s my problem.”

Paduchik said to the Central Committee members he had the authority to remove members—and just cause.

Central Committeewoman Lisa Cooper said her local chairman was told that she was removed from her committee assignment due to her misconduct, but she said she never did any of the things the chairman described, and when she called Bis, he refused to give her an answer.

Shannon Burns, a Central Committeeman, who is also chairman of the Strongsville GOP, rose to say that he leads the largest Republican organization in the state, and he did none of the things the chairman mentions. Still, he was also thrown off his subcommittee.

Burns said to Paduchik he suspected that he was thrown off the Endorsements Subcommittee because he supports former congressman James B. “Jim” Renacci‘s primary challenge to Gov. R. Michael Dewine. 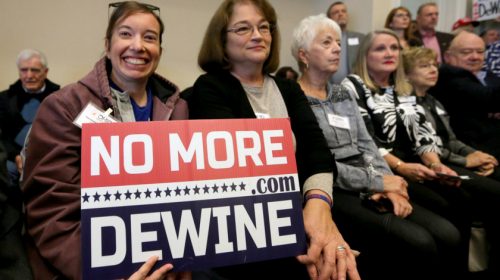 “Up until this point, I thought you removed me from the committee because I am a Renacci guy,” he said. “I am not aware of myself doing anything of the sort of releasing anything, doing anything you just referred to,” he said.

Quickly, Paduchik said he was not accusing Burns.

“Then, why did I get removed from a committee?” Burns asked.

Paduchik told him he had the authority to rework the committee assignments and that Burns and some others were reassigned because other people asked to be on that committee.

Rosenberger said she wanted to have a roll call vote in her statement about her resolution. Still, the chairman reminded her and the Central Committee members that his reading of the bylaws was that there was no provision for roll call votes.

On a voice vote, the Rosenberger resolution failed.

The third resolution was proposed by Central Committeewoman Melanie Leneghan, who participated by phone.

Leneghan’s proposal would prohibit the Ohio Republican Party from providing services and support to candidates without an endorsement by the Central Committee.

The leader of the Strongsville GOP said President Donald J. Trump changed Ohio because it was once a purple state, a hard purple state, and some years, it was a blue state. 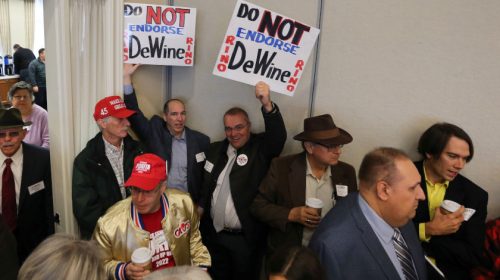 Burns said the party’s dominance in Ohio means there will now be contested primaries. “We need to be thinking about the way we are going to operate, so we are being fair and representative to all to the voters.”

Once again, a motion was made to refer this motion committee, but when Paduchik called the voice vote, it was clear that the nays were louder.

This put the chairman in a tough spot. The resolution was a direct assault on his policy of helping the DeWine reelection campaign. It even provided the Ohio Republican Party to claw back money already sent to the DeWine camp.

Paduchik could not call for a roll call vote because he had already ruled that the Central Committee could not have a roll call vote, so he called for dividing the house. At the chairman’s direction, those in favor of shelving the resolution stood to be counted, but no names were recorded, unlike with a roll call.

Two resolutions never got heard, one calling for protections for whistleblowers and the other for members of the Central Committee with jobs and or appointments with the state to recuse themselves from any vote to endorse DeWine.

The next Ohio Republican Party Central Committee meeting is expected in February.

Neil W. McCabe is the national political director of The Star News Network. Follow him on Twitter: @neilwmccabe2. Mail him your news tips at: [email protected]